I’ve fought two uphill battles during my time on earth: mental illness (neurodivergence) and friendship. Friendship is difficult for me. When people are not upfront with what they need from me or what they want to say to me, the difficulty of reading social cues intersects with my anxiety in a way that tends to spiral. Possible ways to ameliorate that problem come in the form of two key social elements: 1) asking for consent or explicit clarification  and 2) setting boundaries. Part of the way many neurodivergent people like me do this is by being as upfront as possible, using “scripts” or prompts—an arsenal of pre-composed questions or statements that help with understanding and interacting with social situations. Many neurotypical people use these snippets as well, some examples being, “Hey, are you free to hang out tonight?” or “Do you still plan on [doing something at a specific time]?”

The purpose of opening with this information is to say that scripts, consent, and boundaries are all good things, and because some recent viral Twitter posts have the potential to do harm to these important concepts and the people who use them. I am, of course, referring to these two recent posts that have become widespread memes: 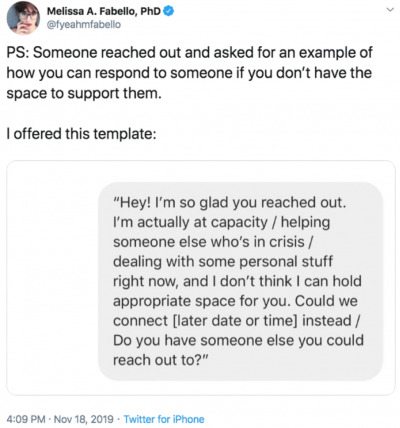 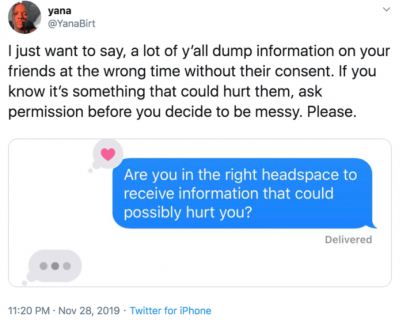 The first example (we’ll call it “At Capacity”) deals with the concept of how to properly set boundaries with your friends, while the second (let’s go with “Right Headspace”) tackles the concept of consent within friendships. (Before deciding to write this piece, which will inevitably make people mad, I sat down with my clinical psychologist to get her feedback on these posts, and she agreed that these are not healthy ways of interacting with friends—they make poor use of the invaluable tool of using scripts to deal with social situations.) What’s troubling is that the concepts used in these tweets are both good and useful, though how they are executed is not helpful and it also explains why they went viral.

This script is perhaps the worst possible way of asking for this kind of consent, second only to the breakup classic “Can we talk?”

Let’s start with the second post, “Right Headspace” because it deals with asking a question, while “At Capacity” deals with providing an answer. The basic point of “Right Headspace” is the original poster (OP) is asking their friend for consent to tell them something potentially harmful. This is a good thing to do, and people should absolutely do it more often. However, this script is perhaps the worst possible way of doing that, second only to the breakup classic “Can we talk?” Why? The point of asking consent is to inform someone of your intent and give them a genuine opportunity to say no. What that means is being clear and upfront with what you’re asking them. A genuine irony here is that a good example of how to do this can be found in the parent tweet to “At Capacity” where the OP’s friend sends her a message asking:

This is a good example of asking consent because 1) it is explicit about what is being asked of the friend (i.e. to vent about something sensitive such as issues regarding weight or body image) and 2) it is considerate of the fact that the texter knows that what they are asking of their friend has the potential to be difficult. While I myself wouldn’t phrase it using the words “emotional/mental capacity” because I personally find it a little patronizing, the message of consent is still effective because it leaves space for the receiver to say no. This space is given because the text is explicit in its request and considerate of the receiver’s needs. This is exactly what makes “Are you in the right headspace to receive information that could possibly hurt you?” ineffective. “Right Headspace” doesn’t inform the receiver of the context of said information, leaving them room to panic about what that information could possibly entail. Plus, knowing that the information could potentially be hurtful without knowing what that information even is doesn’t give the receiver a genuine opportunity to say no. Because, like “can we talk?” the distress the text was trying to avoid has already been planted—and finding out what lies behind that message now seems necessary to mitigate that distress. Basically, if someone asked me this question, I would have a panic attack.

Now, let’s talk about “At Capacity.” The aim here, to set emotional boundaries with friends, is useful and healthy. How it is executed linguistically is not. This message reads like the rejection letters I get when I cold pitch a publication I haven’t yet written for, including, “Hey! Thanks for reaching out!” If someone comes to you in a way that is both considerate and vulnerable, as in the case of the message the OP was responding to about issues regarding weight, being cold to them (albeit cheerily) is, well, not helpful. Not that I’m the be-all-end-all of friendship gurus, but if I received said text but wasn’t in the right place to help my friend with something that is troubling them, I would start by acknowledging that I see that they are struggling, and that I love and care for them. Setting up the boundary is more difficult. What makes the text so meme-able is its madlibs format where the person is “at capacity” (whatever that means), “helping somebody else who’s in crisis” (because you know, everyone comes to me for help, so you’re going to have to wait your turn), and the more honest “dealing with some personal stuff right now.” When I’m in crisis or upset and want to talk to someone and they can’t talk to me, what I don’t want to hear is that they can’t hold “appropriate space for you right now.” This makes it seem like you’re encroaching on their life, and that they just can’t handle whatever mess you’re bringing, and the weird cheery managerial lingo doesn’t make that any better. Continuing that line, “Could we connect” is something you say to someone on LinkedIn. (However, I would posit that asking if there is someone else said person can talk to is perhaps the one useful snippet in this text because if someone is in a crisis, it is important to make sure that, if it’s serious, they’ll be taken care of even if you’ve made clear that you can’t talk right now.)

Transactional language strips love, kindness, and empathy from the social scripts of friendship, the exact sentiments people need when coming to you for help.

But really, when it comes down to it, when you’re responding to your friend after they’ve given your explicit consent about what they’re asking of you, this text is just not that, well, friendly. Saying something like “I’m sorry you’re having a rough time right now, and I want you to know that you are my friend and I love and care for you no matter what. However, I’m going through some stuff myself [or now’s not a good time, etc] and don’t think I can handle talking about [that particular topic] on top of that right now. Is it ok if we can talk about it another time?” This is essentially saying the same thing as the original text but in a way that is, well, nicer. You’re still establishing your boundaries, but you’re also respecting that your friend is coming to you from a point of vulnerability by reassuring them that you care. Part of friendship is reciprocation and empathy, and management speak doesn’t give that to them—it instead shuts them out and turns the focus away from their vulnerability and what they’re struggling with and towards how much you have to deal with.

Effective psychology aside, both posts are bothersome in other ways. Both feel like absolute humblebrags about how the original tweeters are such good friends, the kind of friends so many people are reaching out to for help because of their Goodness. They have “At Capacity” premade rejection letters for requests they simply cannot take right now; “Right Headspace” suggests that by not behaving like them or using their specific script you are a Bad Friend Who Hurts Others. But the bigger issue is language. These posts use the legalistic, managerial language of Human Resources as a framework for talking to your friends. While many neurodivergent people are unfairly criticized for sounding “robotic” when using scripts, there is a difference between being overly specific and detailed about what you want or need from a friend and speaking to them in a corporate, transactional way (like they have the potential to sue you). This helps explain why these posts both went so viral. What the memes and joke tweets that followed are making fun of are not the use of scripts, the need for consent, or the value of setting boundaries. Humor, especially internet humor, is all about contextual relationships. The managerial, legalistic language used in these tweets is meme-able precisely because when presented with the vulnerability of others, most people don’t talk to their friends like they’re HR about to serve up a personal conduct warning. The context of the language (deeply impersonal) and the context in which that language is used (a deeply personal situation) is mismatched, resulting in the classic effect of non-sequitur.

But these tweets aren’t all fun and games. The fact that this type of language has entered the lexicon of friendship, one of the few human bonds that hasn’t been devastated by the transactional logic of neoliberalism—and has done so under the guise of being considerate or politically correct—is alarming. Transactional language strips love, kindness, and empathy from the social scripts of friendship, the exact sentiments people need when coming to you for help, regardless of whether or not you can provide that help at that specific time. Neurodivergent people too need that love, gentleness, and empathy, which is why they usually straight up ask for it in ways neurotypical people don’t. The implication that neurodivergent people should seek to use legalese when speaking with friends implies that we can’t distinguish between being open and explicit with our needs and being cold or patronizing. The appeal of the managerial language of these texts is that they seek to avoid the scariness of opening yourself to the emotions of others and their messy vulnerability. But it is precisely that messy vulnerability which makes friendships difficult (especially to people like me who can’t even handle their own emotions) but also worthwhile and wholesome. There’s no need to have to sound like you’re about to bill your friends for emotional labor.

College football in a pandemic reveals our capacity for Trumpism.

The call came early in the morning, November 9, 1990. I believe it was Kim Christensen who telephoned to tell me Ray Navarro had. . .

Art for Tove Ditlevsen’s Fragmentary Self.

On the radical facticity of The Copenhagen Trilogy.

How a democracy regains self-respect after Trump.

Art for Streamlining the Streaming Regime.

The Music Modernization Act promises to streamline a long-antiquated legal regime for the benefit of music’s bright streaming future.