After thousands of years, Medusa, or an incarnation thereof, reappeared on the global scene suddenly and without warning in a cringe-worthy kids show called Graveyard Smash. The Disney Channel canned-laughter flop’s premise was that leftover costumes in a Halloween store became little Halloween children, attended their own middle school, and formed cliques based on their costume type. The whole thing felt eerie and not on purpose; it was oddly devastating to watch because of the heavy bullying that was never acknowledged; many of the episodes seemed to be filmed in one long, awkward pause-filled take. Through its problems, Graveyard Smash made its stamp on the zeitgeist and remains a household name today, though many haven’t seen a single episode. This is often attributed to the fame of its white-guy star, Garcon Godiche, who has recently been in the news for almost killing his entire family for content for his YouTube channel. A select few, though, remember that it was actually the appearance of Medusa that gave the show its cult following.

A small but memorable plot point in the show was that one young girl/costume was the only Medusa in the school and, as such, was relentlessly bullied, ending up as the butt of many lazy jokes when the writers forgot what they were supposed to be writing about. A select group of viewers began looking more into this punching bag of a girl, noting the strangeness of the decision to have her face appear silver and how lifelike her snakes seemed, how the things seemed to be alive and fluid in a way that was attentive to a degree above and beyond any of the other kids’ costumes. Eventually, Twitter caught on that this child actually was a young Gorgon, and that’s where the chaos began.

This was when the world knew, for certain, that we were housing an actual, real-life Gorgon.

Practically overnight, people were admonishing the young girl for being satanic, hailing her as the first sign that the apocalypse was officially on its way. Just as quickly, Gorgon-rights groups that no one knew existed were coming to her defense, writing think pieces about the bravery of Disney for having her on, how she’s representation for other little Gorgon girls everywhere and should just be given her own show. Amid rising controversy, the network was far too brand-friendly to deal with such a polarizing program, and they cancelled Graveyard Smash just six episodes in. Through all of this outcry, we heard nothing from little Medusa, and the world waited with its breath held for her to make some kind of a statement. Finally, Ellen Degeneres, our savior, landed her for an interview, and record amounts of people tuned in to watch the mysterious little girl try to milly rock to a fourteen-year-old Pitbull song. But when Ellen asked her first question, she was met with absolute silence and stillness on Medusa’s part. America’s Fun Aunt, the only person who seemed truly suited for the job of getting to the bottom of Medusa, made attempt after attempt to get her out of her shell, to make the audience laugh, to ease the tension, but Medusa said nothing and sat absolutely still.

It’s important to note here that it wasn’t just the fact that she had snakes on her head: it was that the snakes were big and they were brown and they were alive. Viewers had become accustomed to seeing little jerky garter snakes on Medusa’s head in Graveyard but felt more than a little queasy when confronted with the giant, brown, writhing masses that not only flowed over her head but seemed to wrap around her neck and cover her eyeless face, further shattering the illusion that this child could actually be human. Getting the public to feel sorry for a little girl with silver foundation and thick green hair is one thing, but getting them to feel the same for a girl with brown, sentient masses attached to her scalp, covering most of her featureless, somewhat glittery visage, was another. This was when the world knew, for certain, that we were housing an actual, real-life Gorgon.

Flash forward fifteen years, and Emma Chamberlain, the actual very first Relatable and Funny Young White Girl YouTube Comedian, randomly shouted out an Instagram account called Medusa and the Polis, saying “it’s like . . . crazy, you should check it out” before moving on to talk about the record-breaking sales of her memoir. That one tiny shout-out, though, earned Medusa’s account tens of thousands of followers within two weeks, and the numbers have continued to rise. Redditors quickly connected the dots between the silver-faced woman on Instagram and the silent little girl who brutally disturbed Ellen’s pristine white face while sitting on her pristine white couch. 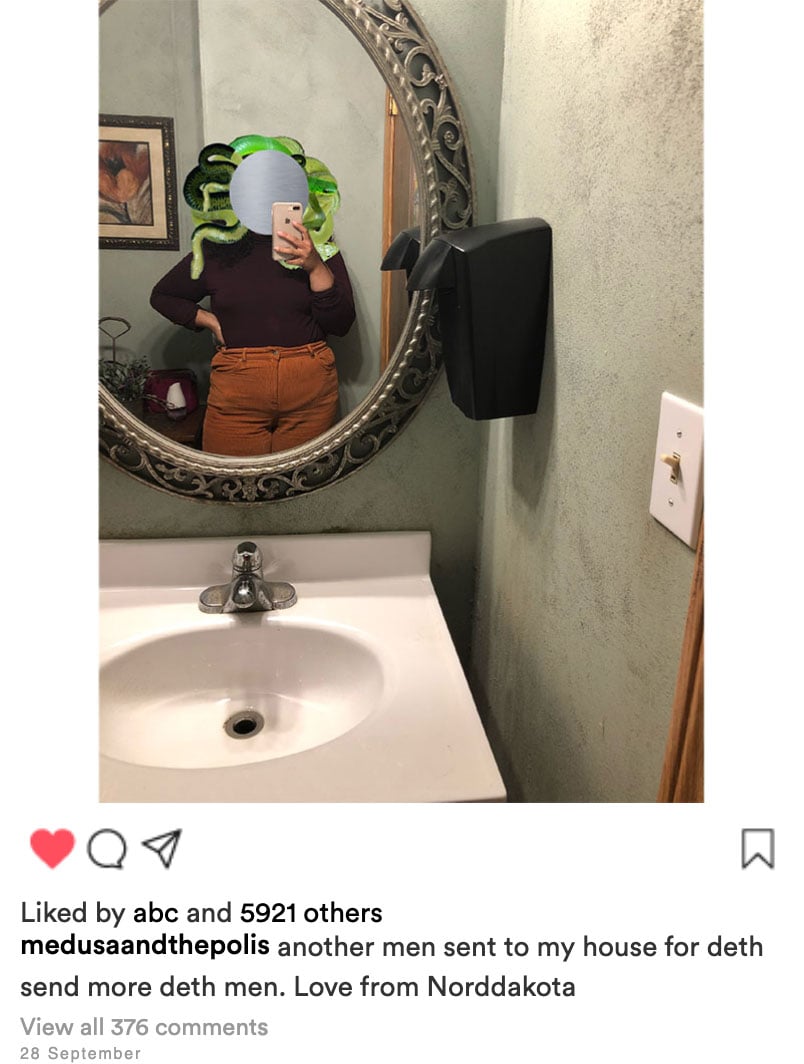 Medusa, once again, entered our consciousness, as if she had ceased to exist while we forgot about her. The small page quickly amassed millions of followers, with people from all over the world waiting, once again, for some kind of explanation from Medusa. We waited for her to tell everyone that she was actually just joking, that the snakes in her hair look real because she’s hired a world-renowned CGI team, that the whole thing was a social experiment. But not only has Medusa never uttered a word on camera to this day she’s also never made a post that’s easy to interpret. She frequently takes pictures in bathrooms in towns in the Midwest; she’s constantly in Home Depot “buying more supplies”; and she is rarely ever in a photograph with anyone else in the frame. She has also, on numerous occasions, posted full pictures of the front and back of her credit card, as if daring people to try to steal her identity.

Making sense of Medusa is difficult to do. No matter what the internet Gorgon activists may try to tell you, no other confirmed Gorgons have ever come out to defend or comment on Medusa and, in fact, there aren’t any others that we know of, full stop. If she’s truly the mythical Medusa, are her two sisters out there? Are they waiting for her? Can we also follow them on Instagram? The issue here is that we’re all playing at being monsters, like the kids in the show, to try to get in her head and figure out why she does the things she does. We want to know what she does when she wakes up, where she goes and with whom, and how she exists in the first place. To that end, Medusa has received plenty of backlash in the form of hate comments and general cyber-bullying, many outraged that she “won’t show her real face,” telling her she should be ashamed that she’s lying to the world, that the people who follow her deserve to know the truth. She also constantly receives death threats, and has on multiple occasions been the focus of targeted, in-person attacks, which we know because she usually makes some kind of “guys I’m still alive” post on her Instagram afterward, often from the parking lot of a Home Depot. BuzzFeed, ever a fan of Medusa, has written an article confirming these attacks, saying “twelve different men have made an attempt to break into her home, four have been identified, and none of those four have been seen after their attempt.” That article was shared across every social media platform millions of times, offering people the option to understand either that she had killed those men, they had been petrified when they looked upon her “real face,” or the murder attempts were all a hoax that she arranged for clout. 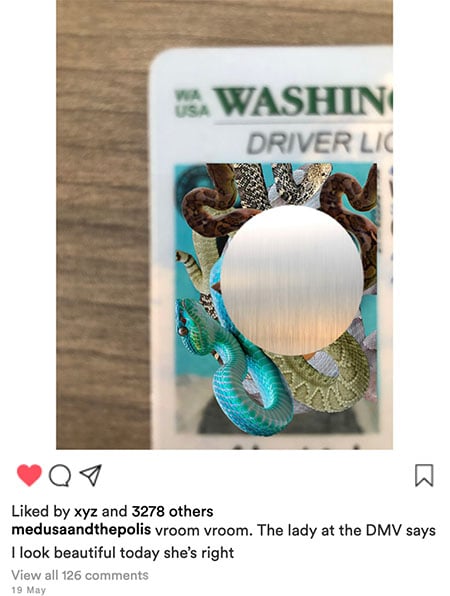 The only real thing anyone can definitely say for sure about Medusa is that . . . she’s confusing. She’s difficult to define, she’s hard to pin down, and she absolutely does not make it easy to consume her. With every picture of her at Petco buying yet another koi fish, and with every man that goes missing, we’re left wondering what’s really going on, desperate for someone who will make a fourteen minute YouTube video that perfectly sums up how a monster simply came to exist among us and why, instead of choosing to kick off the end of the world, she decides to audition for Disney Channel shows and spend time picking out pictures of herself that she’ll share with people that she refuses to talk to. Being unable to consume her makes her as threatening as the snakes on her head, and the more we try to chew her up, to take her in and never let her go, the more violently she ejects herself from us, and the more quickly the cycle continues. It’s not unreasonable at all to consider that Medusa is a metaphor, that she is the very end of late capitalism, when the things we wish to purchase stand up and walk out, not wanting to be bought—when this world that we’ve created around us gives up, deciding that we’re not worth it in the first place.

But it’s also not unreasonable to consider the fact that maybe Medusa is just a twenty-year-old girl. Maybe she went to the audition because she wanted to be on TV, like a lot of little girls do, and maybe right now she just wants to have an Instagram account because that’s one of the tools we use to communicate. And maybe she’s just trying to keep to herself, perfecting the art of minding her own business that obviously none of us, especially not me, have.

The truth of the matter is that if Medusa were, at just this moment, to tell us that she was going to drop the silver mask to petrify us, we would all stare raptly in her direction, hoping to be petrified, and become decorations in her home. No matter how you slice it, if we are playing a game, Medusa has already won.

Lily Watson is a writer based in Seattle. She is a recent graduate of Wesleyan University with a degree in sociology.

Teaching Them a Lesson

Jordan uses the pandemic to crack down on its largest union.

A dying mill town and its toxic legacies.

Art for Virtue by the Numbers.

Virtue by the Numbers

On the bad methodology of corporate diversity and inclusion indices.

Art for Teaching Them a Lesson.

Teaching Them a Lesson

Jordan uses the pandemic to crack down on its largest union.