“A railway-train met us, conveying a regiment out of Washington to some unknown point; and reaching the capital, we filed out of the station between lines of soldiers, with shouldered muskets, putting us in mind of similar spectacles at the gates of European cities. It was not without sorrow that we saw the free circulation of the nation’s life-blood (at the very heart, moreover) clogged with such strictures as these, which have caused chronic diseases in almost all countries save our own. Will the time ever come again, in America, when we may live half a score of years without once seeing the likeness of a soldier, except it be in the festal march of a company on its summer tour? Not in this generation, I fear, nor in the next, nor till the Millennium; and even that blessed epoch, as the prophecies seem to intimate, will advance to the sound of the trumpet.”

Official Washington is in the midst of a great spectacle of teeth-gnashing and garment-rending, as it mourns the passing of its great warrior hero, John McCain. The late Arizona senator made his genuinely heroic tour as a prisoner of war in Vietnam the great defining crucible of his later life, and there’s little doubt that the experience informed many of his most admirable stands on policy matters, such as his principled opposition to torture.

But McCain’s appeal for the vast establishment cult of opinion-makers, political reporters, and political leaders nestled in the Beltway goes well beyond his five-and-a-half-year imprisonment in the wake of a bombing run targeting a Hanoi power plant. No, John McCain became a political demigod because of what he was able to make of his war-hero bona fides; he resuscitated his fledgling political career in the wake of the Keating Five scandal largely by taking to the airwaves and explaining how he’d carelessly permitted his sacrosanct birthright as an avatar of our martial virtues virtue to be sold to Savings & Loan hustler Charles Keating for a mess of pottage—$112,000 worth of pottage, to be precise, together with a fistful of donor-funded junkets and Caribbean vacations. As the Phoenix New Times addressed Arizona’s junior senator in a blistering 1989 editorial titled “McCain: The Most Reprehensible of the Keating Five,”

You won’t let anyone forget that you were a prisoner of war. But you have played that tune too long. By now your constant reminders about your war record make you seem like a modern version of Arthur Miller’s tragic failure Willy Loman. . . . You sought out a master criminal like Keating and became his friend. Now you’ve discarded him. It shouldn’t be surprising that you are now in the process of selling out your senatorial accomplices. You’re John McCain, clearly the guiltiest, most culpable and reprehensible of the Keating Five. But you know the power of television and you realize this is the only way you can possibly save your political career.

This, needless to say, is not how McCain’s role in the Keating scandal is now being memorialized; it is set down now as a chastening parable of runaway Beltway influence-peddling that fortunately set the young lawmaker on the path of righteousness early in his career, after a moment of peril. The Washington Post’s epic McCain obituary notes with relief that McCain received “the lightest reprimand” among the senators ensnared in the scandal—and far from interpreting this meek punishment as yet another corrupt self-dealing on Capitol Hill, Karen Tumulty reverently reports that the Keating debacle “lit the fire for what would become [McCain’s] signature issue and biggest legislative achievement: an overhaul of campaign finance laws.”

Adversity was once more faced down, and the great leader’s character was annealed and refined in the fire of public scandal. Washington politics was even, ever so briefly, purged of some of the excesses of dark-money campaign spending—even though, as Baffler writer Patrick Blanchfield notes, McCain’s public outrage over the Supreme Court’s Citizens United ruling overturning the strictures of the McCain-Feingold campaign finance law was, like his evocation of his Vietnam service during the Keating Five probe, mostly a performance for the TV cameras; back in the Senate chambers, he voted against legislation to curb the reach of Citizens United.

As Blanchfield observes, this was McCain’s standard M.O. He postured as a “maverick” dissenting voice to win admirers in the pundit class; in reality, he was among the Senate’s most stalwartly hard-right legislators, even voting with the Trump administration’s agenda 83 percent of the time.

The mythic figure of John McCain, maverick-on-autoplay, offered a beguiling model for the members of our D.C. press corps to preserve their own battered moral self-regard.

This entirely cost-free brand of public dissent is, needless to say, catnip to the Beltway political press, who fondly imagine themselves to be heirs to fearless speakers of truth to power like Edward R. Murrow and I.F. Stone, while eagerly jostling each other aside for the nearest available cable hit. Yes, McCain tirelessly romanced the press by playing to their professional vanity—offering wised-up insider accounts of the inner workings of Capitol Hill and the national political scene for their own equally wised-up delectation. More than that, though, the mythic figure of John McCain, maverick-on-autoplay, offered a beguiling model for the members of our D.C. press corps to preserve their own battered moral self-regard as, much like their spirit-animal senator, they’ve careened from one colossal public betrayal to another, be it their shameless cheerleading for the 2003 invasion of Iraq, or their reliably somnolent coverage of the organized pillaging of our political economy.

What’s more, as McCain himself learned in the aftermath of the Keating Five contretemps, his stature as a war hero had always helped ensure in advance that his motives are beyond reproach—a distinction that the press, too, would sorely love to reclaim amid all the Trumpian chants of “Fake News” and “Enemy of the People” that now point to the all-too-warlike specter of armed attacks on reporters and media properties. Hence the past week’s obsessive blanket coverage on the Trump administration’s initial refusal to fly the flag in front of the White House at half mast in McCain’s honor was all too plainly the press’s own plea for respect-in-proxy.

Likewise, the weekend’s embarrassingly mournographic coverage of McCain’s funeral doubled as the Beltway media’s own extended petition to be regarded with a similarly solemn, quasi-martial seriousness. The outpouring of public grief for this greatest avatar of telegenic capital-L Leadership was akin to what you’d see on the state-run media organs in North Korea or Cuba. When a brief cloudburst opened on to McCain’s flag-draped casket outside the Capitol, CNN reporter Dana Bash actually pronounced to her Twitter feed that “the angels were crying” for the press’s dear departed straight-talking crony.

The Atlantic’s David Frum suggested that the spectacle of McCain’s funeral—which had three former presidents attending, and two eulogizing the fallen warrior, while the sitting commander-in-chief was left tweeting and golfing far beyond the outer margins of respectable Beltway comity and state deference—was nothing less than the final act of Richard III, in which “every legitimate force in the state, living and dead, combined against the wicked king.” Over at the New Yorker, Susan Glasser marveled that McCain’s ceremonial laying-to-rest was “the biggest resistance meeting yet,” overlooking the three to four million protesters who came out for last year’s Women’s March on the Capitol, presumably because it just wasn’t bipartisan and stately enough. Without the barest show of irony, Glasser admiringly quoted George W. Bush, the president who demagogued the country into the ruinous invasion of Iraq (with McCain’s own enthusiastic imprimatur) and made torture official U.S. policy, saying that “above all, John detested the abuse of power.” And in her own Twitter feed, Glasser ruefully burbled that “Hillary Clinton and Dick Cheney next to each other at John McCain’s funeral . . . seems so much how Washington used to be, and is no longer. When Americans hear these stirring patriotic songs today, do they even hear the same words?”

If they don’t, it’s a safe bet that it’s because they’re choking down their own vomit as they come across bilge like this. All this cringe-worthy, state-prostrate sycophancy is an awkward look, to put things mildly, for a profession keen to advertise its reformist credentials with slogans like “democracy dies in darkness.” The truth of the matter is that democracy dies in front of the Klieg lights—and in the solemn, deferential rites that normalize the untethered projection of American imperial power for its own sake.

Meanwhile, in the dreary-seeming, hymn-free conduct of the people’s business, how is the Resistance faring? For starters, invertebrate Senate Minority Leader Chuck Schumer has recently agreed to fast-track fifteen federal judicial nominations that will install the wicked king’s plutocratic agenda in our court system for a full generation. But Schumer has also sponsored a resolution to rename the Russell Senate office building in McCain’s honor, so there you have it: a craven capitulation to the forces of reaction wrapped inside a meaningless flourish of state symbolism. The sacrosanct bait-and-switch of bipartisanship on high is conjured forth once more; in other words, just “how Washington used to be.” Let the angels weep. 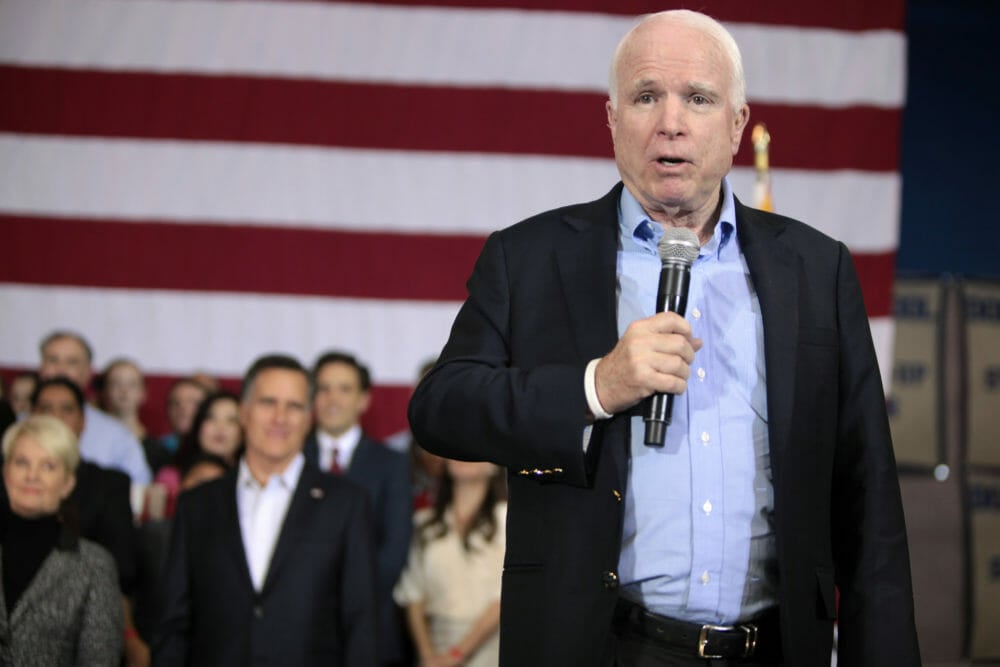 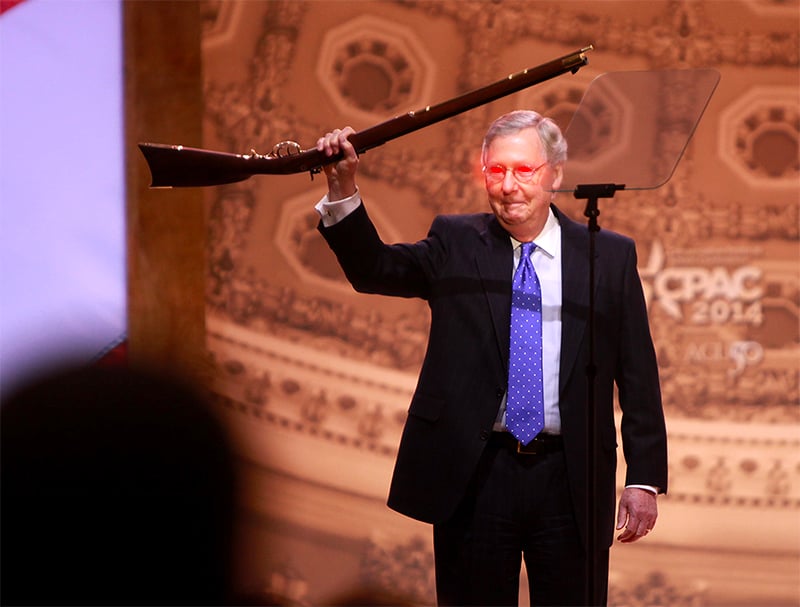 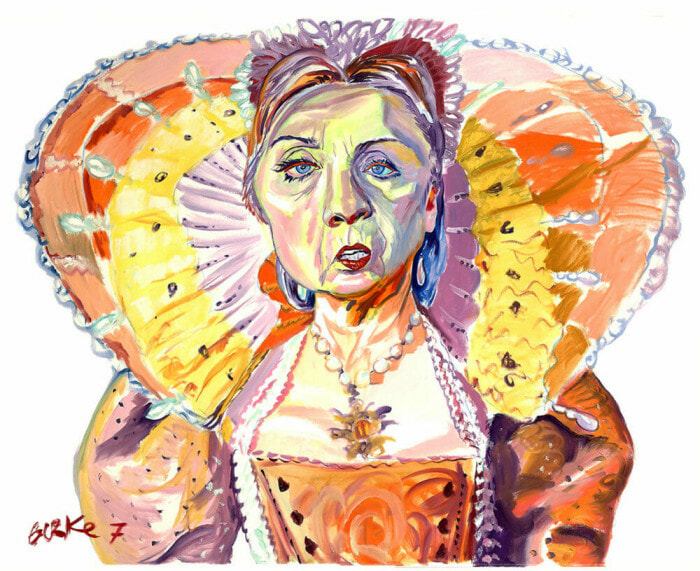