There’s probably no firmer truism left standing in the shambolic house of liberalism than the notion that education is the great prime cause of social mobility. Go back to any Democratic platform over the past generation, and you’ll see the same broad shibboleths affirmed, over and over: America needs a world-class educational system to compete in the new global economy; educational achievement translates into middle-class prosperity; bold initiatives must be undertaken, and new ideas welcomed. And while teachers still have vital collective bargaining rights, our schools are in dire need of more “accountability” (read: merit pay, tethered to a mass national-testing regime) and generous new heaps of “innovation” (read: charter schools, and various other privatization schemes).

It’s no doubt a blow, then, that The Atlantic, a stalwart organ of neoliberal consensus, now comes bearing the glum news that your fancy and expensive education may not propel you up into the knowledge economy’s empyrean, after all. Summarizing the path-breaking recent research of University of California at Berkeley economist Jesse Rothstein, Atlantic scribe Rachel M. Cohen notes that the path to mobility isn’t founded on the acquisition of smartly credentialed skills and talents, but rather on more mundane material bulwarks. After synthesizing the results of several national studies, Rothstein found

that differences in local labor markets—for example, how similar industries can vary across different communities—and marriage patterns, such as higher concentrations of single-parent households, seemed to make much more of a difference than school quality. He concludes that factors like higher minimum wages, the presence and strength of labor unions, and clear career pathways within local industries are likely to play more important roles in facilitating a poor child’s ability to rise up the economic ladder when they reach adulthood.

Another review of earlier labor-market research, by scholars working in conjunction with the Center for American Progress, singled out union membership in particular as a key coefficient of upward mobility, Cohen notes; the authors of this study “found that low-income children who grew up with parents in unions earned more as adults than the children of nonunion parents. They concluded that making it easier for individuals to collectively bargain would likely help boost economic mobility.”

Fancy that: growing up in a culture that prizes the collective quest for economic fairness is more apt to deliver economic fairness than all of our lovingly calibrated measures to wire, privatize, and test our heroically striving students into world-conquering success. Surely the proud empirical policy mavens atop the Democratic establishment will start directing philanthropic millions to revive the prostrate U.S. labor movement, and convert our schools into showcases of union-administered public services, amid rousing choruses of “Solidarity Forever.”

Liberals will continue to hymn the bright shiny wonders of just-in-time, corporate-funded knowledge provision, and blast away at the small-minded perfidy of the teachers union cartel.

Hah, just kidding! The education “reform” movement, regardless of its major-party coloration, is abidingly hostile to union culture generally, and teachers unions in particular—even though, curiously enough, teachers unions remain a critical source of Democratic Party largess and organizing strength. In this regard, Democratic apostles of school reform are simply mimicking the political reflexes of their hero Bill Clinton, who eagerly endorsed NAFTA and other free-trade accords in the nineties over the strong objections of union leaders. Back then, the voguish New Democrat rejoinder to those objections was “what are union members going to do, vote Republican?” A miserable political generation later, we know the answer: yep, they sure are. (Both Clintons made their names as business-friendly New Democrats way back in the early eighties, as it happens, by attacking Arkansas teachers union members for objecting to the introduction of competency tests to secure a merit-pay regime in the state. Plus ça change, plus c’est la même chose, as they used to say in my seventh-grade French class.)

Unfortunately, now that our meritocratic liberal governing caste has expended so much political capital on the disparagement of teachers unions, the public-sector labor movement at large faces a moment of potentially disastrous reckoning. The Supreme Court announced late last week that it would hear Janus v. AFSCME, a case that, should it be decided for the plaintiff, could effectively steamroll public-sector unions by doing away with the requirement that all employees represented by a union pay a fair share of the costs of their representation. The high court addressed the same underlying issue in a case from its last term, Friedrichs v. California Teachers Association, and upheld a lower-court decision permitting dues-collection to continue via a deadlocked 4-4 ruling. Now, however, Neil Gorsuch has replaced his late ideological soul-mate Antonin Scalia, and it would be a shock indeed to see this stoutly pro-management justice pass up the opportunity to cripple the further growth of American labor. (And as if Gorsuch’s own judicial track record weren’t a depressing enough indicator, the right-wing junior justice just last week delivered a speech—at Trump International Hotel, no less—for an event honoring the Fund for American Studies, a hack-libertarian outfit bankrolled in part by the Lynde and Harry Bradley Foundation. The Bradley Foundation also backs the National Right to Work Foundation, which is—wait for it—supplying the Janus plaintiffs with legal representation.)

A ruling for the plaintiffs in Janus would mean, in turn, that far fewer children will be growing up in union households in the years ahead, and that the material harms at the heart of our obscenely unequal political economy will be brought that much further from serious, long-term remedy. But never fear: mainstream liberals will continue to hymn all the bright shiny wonders of just-in-time, corporate-funded knowledge provision, and blast away at the small-minded perfidy of the teachers union cartel. For the chief lesson of the great liberal education fetish has always been to carelessly offload the savage inequalities of our economic order for our schools to rectify—an enterprise, in both scale and logic, not unlike tasking Pitbull with the entire post-hurricane reconstruction efforts in Puerto Rico. Nor should any of this be remotely surprising—after all, the American meritocracy has always earned its highest marks in changing the subject. 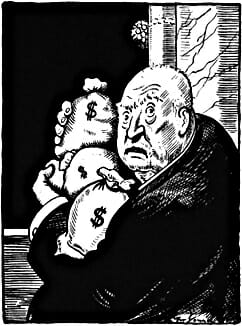