The last burst of photon torpedoes almost got him. If the Imperial destroyer had set the spread a little wider, the torpedo in the innermost orbit would have hit for sure. As it was, Jim’s left shields had been weakened. Now both of them were in wide orbits around Cygnus Prime, and neither were in a good position to fire. Time to try something dramatic.

With a burst of the forward manuevering jets Jim flipped end-for-end. Now his main drive was pointing forward along his trajectory. With a carefully-timed blast he killed most of his forward velocity. He watched nervously as the little blip on the screen that represented his ship began to fall towards Cygnus. He had changed his orbit from being roughly circular to highly elliptical, with a close approach to Cygnus. Very, very close. It looked like he was falling straight in. Could he have killed too much of his speed? His fuel reserves were low; there wasn’t much left for manuevering. He was sweating a little beneath his Federation issue T-shirt. Another slight rotation, another touch on the drive. Cygnus was getting closer and closer.

Meanwhile the enemy was making his own manuevers. He dropped into a lower orbit as well, but it wasn’t quite as daring as Jim’s. He was circling now, reloading his torpedo tubes and waiting for Jim’s outbound pass.

Both knew that such a close approach could cause a radical change in one’s velocity vector. Tiny shifts at perihelion could cause wide changes in the out-bound angle. The ship could be flung out anywhere.

Jim still had plenty of torpedos left. He disdained fanning a group of them out together, preferring the single, clean shot. Just as he was coming up on perihelion, he fired one back at the enemy, who simultaneously fired three straight at Cygnus, hoping to catch Jim in the tight quarters of his pass around the star. Jim dove inward, making the slightest shifts in position, operating on the instinct and reflex honed by hundreds of such battles. The enemy’s torpedos drove in closer and closer. Jim set his shields on maximum, praying that the left one would hold. The first torpedo passed too close to Cygnus and went off prematurely, briefly filling the screen with white. The second detonated behind him, jolting his ship but not penetrating the rear shield. The blip marking the third torpedo disappeared a moment before his own exploded. The screen again went white, but the shot was wide and the enemy unharmed.

Quickly Jim whipped around Cygnus and came bearing down on the enemy with tremendous speed. Within seconds he had loosed a fearsome barrage of torpedoes. The enemy barely had time to turn around before he was hit again and again. The screen flashed white, then white, then red to indicate a direct hit.

A faint communication came from the drifting hulk of the enemy ship. “Hey, wicked flying! The close pass was really cool.”

“Yeah, well, the Force was with me. Hell, it’s late. See you later, Imperial scum.” He left behind his X-wing fighter and bicycled home. Mom had dinner waiting, but his calc homework was waiting too. Jim sighed. Maybe if he finished it early, Dad would let him work on his Dungeon layout.

The first three waves of aliens had been beaten back. General Sean breathed a sigh of relief. They had gotten close that time. Before he could settle back from the firing controls, though, the fourth wave started its inexorable assault upon the Earth. He leapt to the offensive, shuttling his missile batteries back and forth beneath them. They had to be destroyed at a distance. In close up fighting they were deadly. Their blood contained a powerful acid which was almost as dangerous as their protruding jaws. The blood from a wounded alien would eat through the base floor and damage the weapon systems. They laid their eggs inside captured humans too. He remembered how the alien larva had ripped its way out of his navigator’s chest, and shuddered. His date had screamed out loud.

The momentary slip in concentration cost him. An alien ship plunged through the atmosphere and destroyed one of his batteries. Sean could hardly bear to think of the carnage inside. He set back to work with grim purpose. Shift left, fire, left again, fire, now right and fire. He had a smooth rhythm on the controls. Never mind the grim scenes of destruction around him. What was important was a clear, burning concentration, a direct connection between eye and hand.

The fourth wave was destroyed and the fifth started down. They got faster every time. There was no end to them. Dad had been drinking again. Sean dreaded going home that night. There would be light, tense talk around the dinner table. Dad had first left years ago, but he always came back. These days he and Mom would never look straight at each other. Maybe the lasers in their eyes would crisp each other if they locked on. He wished they would just let it go.

Another battery was lost. He was down to his last one. The aliens came down in row after row. No time to think of anything else now. There was room now only for reaction. He fired and fired, and they just kept coming. He cleared out the fifth wave, and the sixth was even faster. They were blurring now. His wrist was starting to ache. His whole world focused down to the shifting icons of the aliens and the battery.

The eighth wave got him. Shit. Didn’t even make the top ten. Maybe Mom and Dad would let him go out early. There had to be some movie playing down at the mall.

Mom was working late tonight at the store, so there was no reason to go home early. Lord Carl of the Axe strode down the palace hallways, alert to any danger. She usually came home late these days, and always seemed tired. The sorcerer’s henchmen were everywhere. The store wasn’t doing well. A guard leaped out at him from behind a curtain, and Carl dispatched him with a single blow. Someone had broken the store’s window with a rock and she still hadn’t gotten the money to fix it. Two more came at him. He killed the first one with an axe swing, then leapt over the second and chopped him from behind.

Somewhere along here was the entrance to the dungeon. The princess was chained up in its deepest levels. Chained up and helpless. He knocked off a couple of more guards before finding the door. He chopped it open and descended to the next level. Here his opponents were a little tougher. Instead of guys in pansy capes and plumed helmets, they had leather armor and broadswords. It took more than one swing to kill them. Still, it wasn’t long before he found the entrance to the dungeon proper.

He wished he knew who had thrown the rock. He’d use a rock on them. The place looked terrible with a cracked window. Few enough people came as it was.

At this level they started getting really tough. Here they were big beefy guys wearing black hoods and carrying axes like his. The place was filled with prison cells. A lot of the cells were occupied. Starved faces looked out through the bars, but there was no point in trying to free any of them. None of those doors led anywhere.

Maybe someone at school had thrown it. The Crips would do something sneaky like this. Shit, he hoped not. Cross a gang and you were toast.

The axemen could come at you from either side. You had to strike, then swing around to get the guy coming at you from the other side. They were better at parrying too. Carl hit and hit, but they blocked every blow. He chopped down one of them, but more were coming onto the screen. He was stuck in place. It was all he could do to keep fending off their attacks, while the clock ticked down and down. He battled his way towards the next door, but didn’t get very far. An axe came down on him just as his time ran out. No bonus lives either.

He glared at the screen. “I’ll be back.” he said in his best Schwarzenegger. Nothing stopped Arnie. Fuck, no more quarters. Maybe he could borrow some from Mitch. 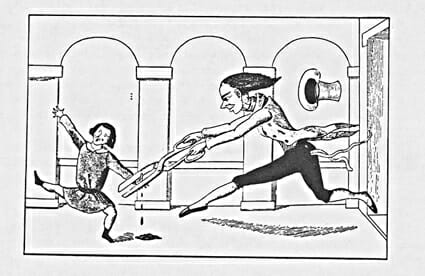 He glided through the jungle, knife in hand. His bare chest rippled with muscle beneath his open flak jacket. You had to be constantly on edge, alert to any movement. They could come at you from in front or behind, from up in the trees or erupting out of the ground. There! A khaki-clad soldier charged him with a bayonet. Joey leapt forward and stabbed down. The soldier met his first blow, but the second got him. His guts spilled out on the forest floor and then he disappeared.

Now they started really coming at him. He was still a long way from the POW camp where his buddies were being held. He slashed and stabbed his way through the press of bodies. There weren’t just commies here. They’d brought out the mercs and ninjas. The mercs wore mirror shades and carried Uzis, but the ninjas were worse. They would appear up in the trees and then leap down and slash at you. You had to jump for it or else you were dog meat.

“Joey, what is this fucking kiddie shit?” came a voice from behind him.

“Chill man, I’m almost up to the lake of sharks.”

“We’ve got business tonight, remember? These guys don’t like to be kept waiting. We could get serious trouble and you’re off playing fucking Rambo.”

“Just let me play this one more—shit, look what you made me do.” The boa constrictor had looped around him. While the snake pinned him, he’d been hacked into a dozen pieces. “Stupid fucking game. OK, let’s go.”

Once they were out of the sub shop, Ramon asked him “So whad’ja got for green?” Joey showed him the wad of bills. He’d had to hock Mama’s rings to get it, but he’d make it all back after this score. “Not bad.” said Ramon. “Are you carrying?”

“Fuck, what d’you think?” He opened his jacket and showed him the gun tucked into the back of his pants. He didn’t show him the switchblade. You never could tell. They could come at you from every direction, especially from your back. You had to be alert to everything. This wasn’t some fucking game, man.