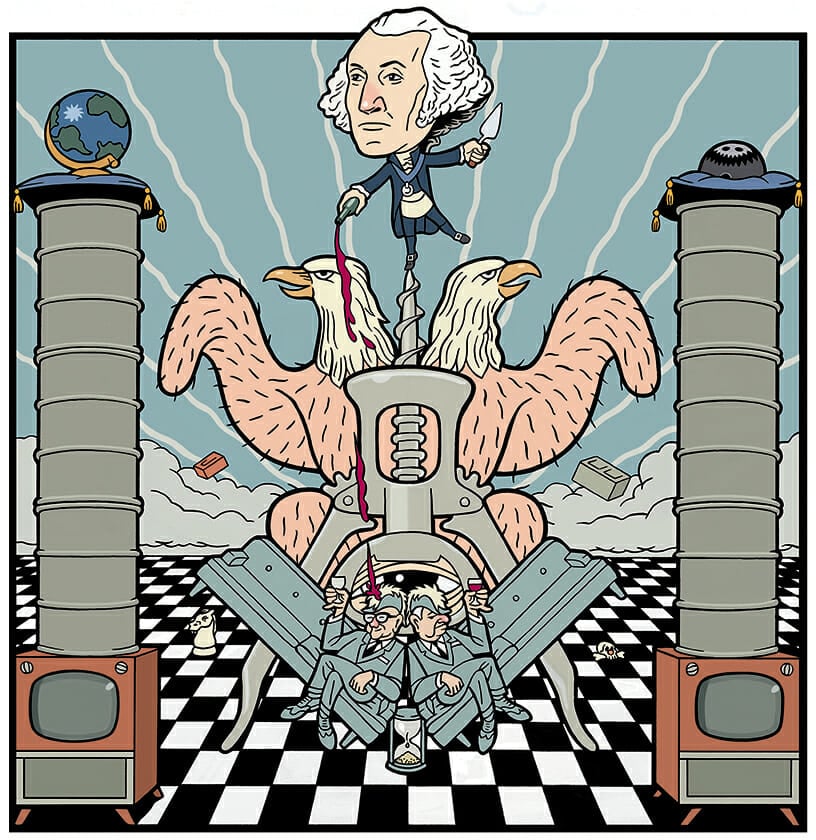 The George Washington Masonic National Memorial in Alexandria, Virginia, is a towering structure, a replica of the ancient lighthouse of Alexandria, Egypt—or, at least, a replica of what people used to think the ancient lighthouse looked like. It features a colossal statue of the first president, monster columns made of granite, and enormous murals depicting significant moments in the life of George Washington, Freemason. The visitor can gaze upon a trowel Washington used when he was laying the cornerstone of the Capitol building, a lock of Washington’s hair, a clock that was stopped at the moment of Washington’s death, an exact replica of the Masonic lodge where Washington attended meetings, and a Masonic apron that belonged to one of his successors, president James K. Polk. But what really hooked me during my visit to this magnificent treasure-house was a pair of blue, vinyl sofas in one of the building’s lodge rooms, sofas done in the unmistakable fake-leather style of the 1970s, and yet preserved so perfectly they might have been manufactured yesterday.

What was it about those tawdry, little-used sofas? They haunted me as I toured the building, gazing upon display cases filled with photographs of crew-cut men in suits, aprons, and Shriner fezzes, captured for eternity in faded color snapshots from the 1960s. Finally it hit me: this is supposed to be a museum of George Washington, but in fact it is a museum of the recent past, a spooky reminder of those years in the middle of the twentieth century when organizations like the Shriners still made cultural sense.

They certainly don’t any longer. I don’t know a single person of my generation who has thought to become a Shriner. I don’t know any Knights of Pythias, either, or any Oddfellows, or any Elks, or even any Rotarians. The Freemasons themselves, the oldest and the largest of the fraternal orders, are fading fast. A chart in the museum I visited shows the flagging membership, and a recent story in the Wall Street Journal describes the group’s efforts to reverse its decline. There is even a campaign under way on the Internet to persuade people to join the Shriners—BeAShrinerNow.com—which depicts that fraternity as a kind of Boy Scouts for grownups.

Once upon a time, however, Americans signed up for these organizations in great ecstatic waves. Mere fraternal orders weren’t enough for joiners of a century ago; they had to have affiliated organizations with grand costumes and elite groups within elite groups. The made-up rituals, the bankerly bonhomie, the small-time exclusiveness—oh, it was like the most fun ever. They raised huge sums for charity. They built fantastic limestone meetinghouses in cities across the land, Greek temples stacked on Romanesque blocks, named (just for good measure) after some favorite episode from Romantic literature.

A well-known conspiracy theory about the Masons has it that they were somehow responsible for the English Peasants’ Revolt of the 1380s. That’s the kind of origin story that I personally would go for, were it held up as a guiding myth by some fraternal club, with costumes and allegories and cryptic reenactments and all the rest of it. But that kind of plebian stuff isn’t on official offer.

If, however, you are the kind of joiner who hankers for fake aristocratic Arabism, the America of a hundred years ago spoiled you with choices. There was the “Mystic Order of Veiled Prophets of the Enchanted Realm,” which took its name from a character in a now-forgotten nineteenth-century poem. There was the “Dramatic Order of the Knights of Khorassan.” The “Tall Cedars of Lebanon.” The “Pilgrim Knights of Oriental Splendor.” Sometimes this exoticism would cross the battlefield to dwell on romantic, doomed crusaders, as in the Masons’ fascination with the Knights Templar. It even wandered north to bring us outfits such as the “Imperial Order of Muscovites,” which was organized into “Kremlins” and presided over by “Czars.”

It would probably require an advanced degree in what conspiracy-novelist Dan Brown calls “symbology” to chase down and explain all this half-forgotten lore. Unfortunately, Brown’s novel about the subject, 2009 mega-seller The Lost Symbol, doesn’t delve into the fascinating matter of moribund middle-class ritual. Instead it takes us in the other direction, imagining that Freemasonry is still electric with significant activity and that advanced Masons are men of great spiritual accomplishment with access to “the lost wisdom of the ages.” What happens, in Brown’s exciting account, is that the Masons are infiltrated by a bad guy who uses murder and kidnapping to figure out the complicated puzzles the Order possesses in such abundance. It is strongly suggested that if this villain manages to solve these brainteasers, terrible consequences for humanity, and even for “national security,” will result.

In the end, though, it turns out that the only real danger is that the evildoer might post a video on the Internet showing important men performing embarrassing Masonic rituals (high-tech CIA magic is used to prevent him from posting it, whew!) and that the lost wisdom of the ages is found in . . . the Bible. Oh well. Brown will have to come up with something better than that for his novel about the Oddfellows, which I can only assume is forthcoming, or it’s all over between us.

Unfortunately, the great mystery of Freemasonry—and of all these other slowly expiring fraternal societies—is not the profundity they convey across the centuries, but the way they slam together the sacred and the profane in a train wreck of confused symbolism. I refer to that off-putting moment, familiar to any resident of a big American city in the sixties or seventies, in which you saw the leading businessmen of your burg don silly hats and zoom around in tiny cars, having organized themselves into a group bearing the high-flown name of the “Ancient Arabic Order of the Nobles of the Mystic Shrine.”

It was potent stuff once, this urge to veil averageness in exoticism, to dress up boring middle-class lives with bogus history and phony aristocracy. But today it is all growing dim, becoming as mysterious to us as the obscure symbolism of Masonry itself. R.I.P.