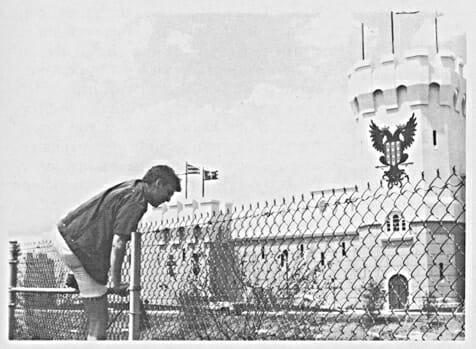 The entertainment industry is often depicted as an enormous machine that gobbles up culture, filters out all impurities, and produces an odorless, colorless, and flavorless liquid refreshment that pours from taps all over America. But only after the syrup is in the pipe does the important work of the record industry become clear: it must convince us (over and over again) that the product is so tasty we can’t forget to line-up each night at the faucet to fill our cups to overflowing. The entertainment industry engages in a type of parasitism wherein it redirects to its purposes the energies of cultural production going on outside its direct ownership or control. In this basic operation the record companies; film production companies, and marketers of multifarious lifestyle accoutrements find all too willing fellow travellers in the corporate owned media. With a minimum of effort, the pied-pipers of the culture business persuade ostensibly objective news organizations to help peddle their products: every day of the week finds some “music critic” or “entertainment reporter” mechanically regurgitating the flowery praise penned by the marketing department at Warner Brothers (or Sony, or Disney, or MCA).

A familiar operation oils the gears of the synergetic machine: the promotional package. These glossy, multi-media culture-gift-sacks offer photos, quotes, biographical sketches, and free copies of the product in question to the willing entertainment hacks at the New York Times, Newsweek and NBC News, and at thousands of local newspapers and television stations, saving them the trouble of researching a story. This panders to the laziness of most reporters—those Woodwards and Bernsteins in bathrobes, who scurry to their mailboxes in anticipation of that envelope from some helping-hand in Burbank, complete with a CD they can trade as soon as the press kit is safely transcribed into copy. This cheers producers and editors; who know that programming time and blank pages need to be filled-up as inexpensively as possible.

Nor has the entertainment industry missed the college trick. Student newspapers, campus concert committees and low-watt college radio stations are easy marks for the wooing of the entertainment conglomerates. Even more than the seasoned hacks of the commercial media, campus scribes and music directors love the feeling of specialness the promotional gift confers. Every time they open a package crammed full of free CDs and insider-info they hear the bigshots in LA and New York whispering in their ear: “Welcome to the club!” Marketers of every stripe take advantage of campus emporia not only to sell product to this coveted demographic group, but also to learn from it. The unprecedented success of the Nirvana phenomenon has only confirmed the perspicacity of this approach. The story of the band’s quick rise from Sub Pop college-radio darlings to platinum-selling media superstars under the tutelage of David Geffen has become the central music-industry myth of the nineties. Nirvana mapped out a new route to the top, and recent successes by Green Day, the Offspring, and other mall-bred pop-punk ensembles reaffirm the idea: college kids can be whipped into a froth.

But there are always a few unpredictable little fucks who seem resistant to the bliss-inducing electrical jolts up the kazoo offered by the music industry machine. Not only are these youngsters cynical and difficult to deal with, but they are the very people campus taste-makers want to target: college-radio music directors and program chiefs. They won’t buy or play major-label product. They don’t trust corporate hype-sheets. Their scorn for culture industry bootlicks like Rolling Stone and Spin has driven major labels to buy advertising in a host of lesser but more alternative-credible publications, like Raygun, Option, and Alternative Press. But, even these self-styled vanguards of the alternative margins are suspect because they promise their covers, and pages and pages of text, to major label acts. Indie-kids have always sought uncorrupted frontiers. And their search, predictably, has taken them to fanzines or the internet for authentic opinions. There they find a host of splenetic minicommentators spitting vinegar, sharp-toned criticism and angry denunciations of the half-assed crap that is ordinarily praised as art. To readers accustomed to the bland complacency of the commercial media, this seems like depth, like honest reflection. These kids, to whom the folks in marketing would eagerly hand the keys to the inner-world of the industry, shun them for a more recherché club, the underground.

The problem, then, is how to penetrate these difficult youngsters’ cultural sanctum, how to introduce their product (and to enlist their assistance in selling product) without setting off their anti-corporate alarms. Major labels have gone incognito; they have acquired dozens of previously indie-labels simply so the damning logo of WEA or Geffen does not appear on their product.

Luckily, most fanzines are shallow and simple-minded. The multiplication of the genre has generated a surfeit of fanzines blithely willing to reinforce the star-making efforts of major labels. Among the legion of new fanzine writers are a number of star-struck kids, eager to praise—and, Wow!, meet and interview—their corporate rock heroes. All that is left for corporate image makers to do is provide the hagiographies. Robert Pollard qualifies to the extent that he retains a semblance of the oppositional DIY aesthetic that brought Guided by Voices such acclaim. He no longer does. Yet, this needs not cause problems for the image-crew at Matador/Atlantic; they continue to breath life into this collapsing persona. The emperor has no clothes. But college kids, unable to make these meaningful distinctions, still wave around their latest issue of Spank! as if it were The Communist Manifesto.

The latest twists in the ongoing courtship of young consumers are as predictable as they are disturbing. The corporate music labels, drawing from a bottomless well of marketing savvy have effortlessly coopted and simulated the media devices that propagate the underground discourse. Label reps go on-line and steer the electronic conversation towards their soon to be released delights. Label staffers post notices on electronic bulletin boards to boost their artists, taking care to foreground their cred by carrying on informed discussions about still-independent artists. Companies now commonly load product samples on the internet and arrange interactive electronic interviews with artists. With astonishing speed, the internet has become simply another media outlet for corporate pitchmanship.

It is altogether easier for labels to refashion their promotional packages to resemble fanzines. One giant of the music industry, Warner/Elektra/Atlantic, seems to lead the pack in this undertaking. It has created two publications in particular, Dirt and Spew, to catch the eye of college radio music directors. Their attempts have been painfully awkward. Corporate promotions departments seem ill at ease with the anti-formalism of DIY. They are bemused by the valorization of sloppy production values. The marketing chiefs at WEA look at fanzines and see clumsy, cut-and-paste production techniques, misspellings, poor hand-drawn illustrations, and inchoate writing. So that’s what they create. In their eyes fanzines are a kind of low-brow folk-art, like those carved-up tires that people turn inside-out and use as planters.

This is insulting in its own right. It assumes that the vernacular is a language of simple incompetence. Even worse, it assumes that the ingenuous discourse of fanzines—or, for that matter, any kind of creative expression unencumbered with instrumental intentions is naive. But it is also perversely funny, and it illuminates a paradox inherent to the culture industry. What is important is not how big your advertising budget is, it is not how kick-ass your graphics software is, it is not your celebrity contacts with Rollins or Weiland. Command over technology doesn’t matter. What matters is how handy you are at duplicating the colloquial teenage skaz. Are you on the inside? Are you—in a word—cool? Fanzines, hilariously, seem to have profoundly raised such doubts in the promo staff of WEA, Sassy, Urban Outfitters and others, who frantically pluck the little world of self-published opinion sheets out of the trash-basket.

But their project is, in fact, a monstrous perversity. At their best, fanzines allow individuals an opportunity to express opinions outside the dictates of the mainstream media. The privileged club of the established media solicit the opinion of the “man-in-the-street” only when some pseudo-democratic, ex-post-facto assent is necessary to confirm the popularity of their own compromised aesthetic predilections. But when the man (or woman) on the street finds his own voice—and a willing audience for it—the media must sit up and take notice. And when these voices get uppity, ways and means are called for to turn the tables. Imitation may be the sincerest form of flattery, but in this case its larceny.

What counts is the legitimate independence and amateurism of these little magazines, because as long as a space for independent thought can be defended, opportunities for making meaningful use of this space will be preserved. WEA’s use of fake fanzines to sell their product is an abomination similar in every way to the creation of phony family planning clinics by the radical anti-abortion movement. That the aim of the project is less repulsive does not alter the fact that they are performing the same loathsome operation: purposefully mimicking their opponents’ methods in order to strangle the life out of their adversary.

This article is reprinted with permission from The Guardian (U.K.), where it originally appeared.