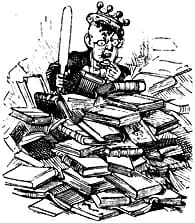 One of the most enduring stereotypes stuck in the heads of citizens of Western democracies is the idea that people in the former Communist systems were mere numbers deprived of individual freedom. Now that the Communist countries have been shattered like cheap cups, it is time that the stereotypes about them should be broken as well, although stereotypes are the hardest things to throw out. With stereotypes we feel less alone.

Maxim Gorky’s slogan—Man, how proud a sound!—had more influence on the individual liberation of the East European masses than the French Revolution. Every citizen of a Western democracy who happened to find himself in one of the former totalitarian regimes will admit that there were many things that puzzled him. I presume that restaurants provided his first insight into Communist relations. Our Westerner certainly remembers those gloomy waiters who hissed curt replies through clenched teeth while waving a napkin as though they were about to hit their customer with it. Those hours of waiting for the food he had ordered, before eating it, his nerves thoroughly frayed, as though it were the sacred host. The way he wondered in horror why waiters weren’t waiters and why a shop assistant (the one who had shouted at him after he had waited patiently in line for three hours) wasn’t a shop assistant. Why? Because the idea of the equality of all people in this world is deeply Communist and because both the waiter and the shop assistant had drunk in Man, how proud a sound! with their mother’s milk. I am sure that the waiter was writing a novel at the time and felt more like a novelist temporarily employed in the catering trade than a waiter, while the shop assistant painted in her spare time and saw herself as Rembrandt with a job on the side.

In the former Yugoslavia (although maybe it’s unfair to use a country that collapsed as an example), there was a Union of Yugoslav Writers and a parallel, properly registered Union of Yugoslav Amateur Writers. The president of that union was an electrician by trade. How do I know? I read one of his novels with great enjoyment.

Today all those countries are practicing post-Communist democracy, as though following a textbook. Waiters are really waiters now; they will polish your shoes for you with the above-mentioned napkin if you need it. It doesn’t occur to shop assistants to be rude; on the contrary, they will offer you extra services in their free time, without you even asking.

I really don’t feel like sharing tinned meat paste and dry bread with some novel-writing chauffeur.

Meanwhile, the slogan Man, how proud a sound! seems to have moved to the West, where it belongs. I find myself watching a TV interview with a prostitute. “I’m not a prostitute, I’m a pleasure activist,” said the prostitute. Then I read an interview with Radovan Karadzic, who destroyed the entire city of Sarajevo. “I’m not a monster, I’m a writer,” said Karadzic with conviction. On TV I recently saw that a twelve-year-old child has published a book. “From my earliest childhood, I knew I was going to be a writer,” she said confidently.

What can I say, life in the world of literary democracy has seriously shaken my self-esteem. I suddenly no longer know what my profession is. I don’t know who I am or where to go.

I really don’t feel like going to Parnassus. I don’t feel like jostling with cooks and electricians there. I have nothing against cooks and electricians, of course. We’re all equal—man, whether a cook or an electrician or a writer, is always a proud sound. But Parnassus has become a cheap trade union rest home, and I do have some experience with that kind of collective hedonism. I really don’t feel like sharing tinned meat paste and dry bread with some novel-writing chauffeur. And I wouldn’t go to that other mountain either, Olympus, even if I were invited. That’s where the newfangled gods hang out, megawriters, literary tycoons, Hollywood Prousts, coddled by the Muses, those zealous employees of the leisure industry.

And then suddenly, in the middle of my identity crisis, I am struck by the realization, like a thunderbolt from the sky, that I am an activist and that in fact I have never been anything else. I have spent night after night with Shakespeare, Goethe, Tolstoy just to penetrate the secrets of my future craft. I sweated under James Joyce just to master the most sophisticated literary skills. I went to bed with lots of writers, even Russians, even two writers at once, Ilf and Petrov, just to learn the sweet strategies of seduction. I slept with Dumas, Rabelais, and Hasek in order to learn the techniques of achieving literary satisfaction. I spent nights with lots of people and nothing was foreign to me: old men, women, children, homosexuals. Victor Hugo and Marina Tsvetaeva, and Arthur Rimbaud and Oscar Wilde.

And when I felt ready, I detached myself from my teachers and set to work. I softened clumsy words with my own saliva in order to stimulate some grumpy literary client. I stripped, writhed, enticed—what didn’t I do to force my reader’s greasy hand to turn the next page of my book! I tenderly licked and nibbled his ear just to force it, that big fat ear, to prick up and open a passage to the seductive gurgling of my words.

What is that if not activism? Yes, I am the real pleasure activist! And I won’t let anyone take the dignity of my profession away from me.