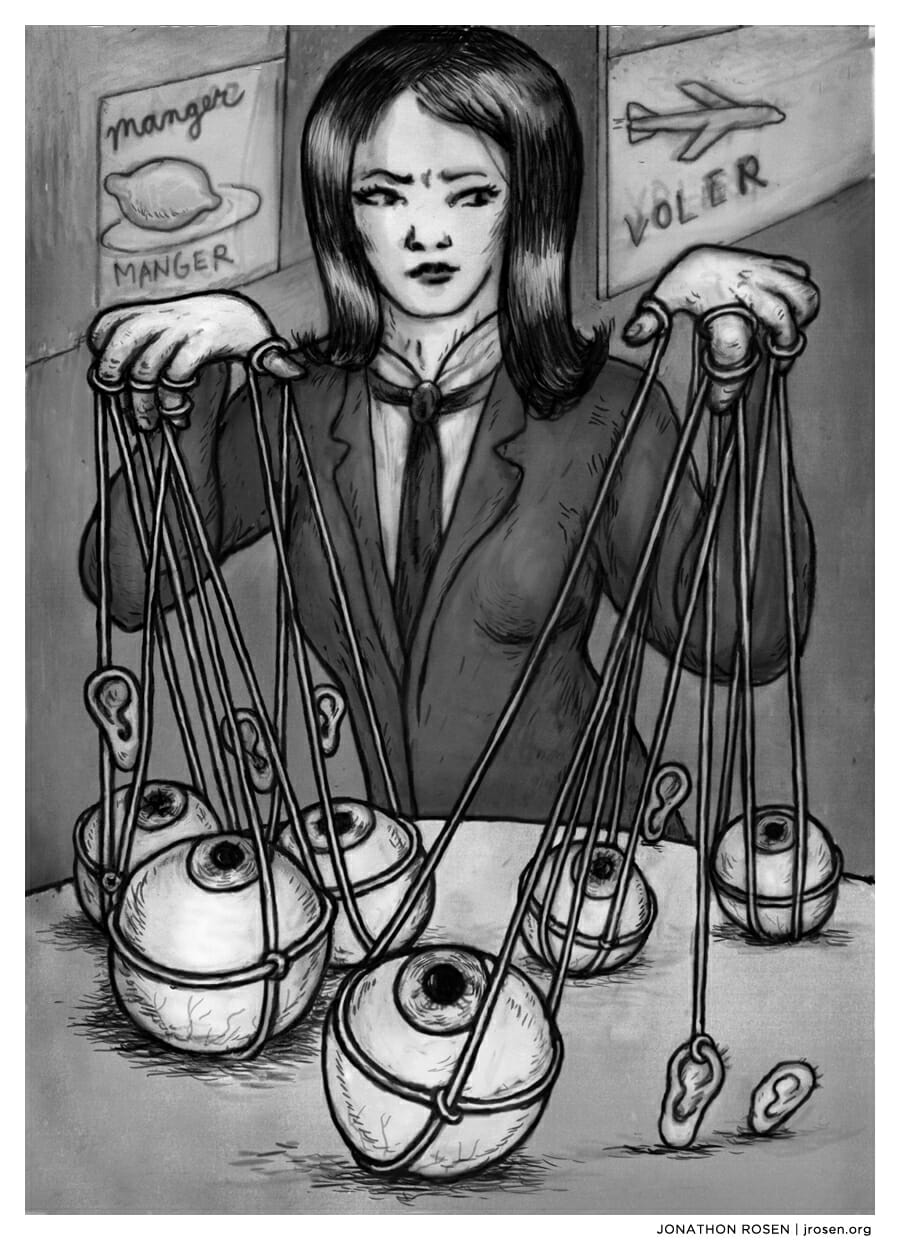 An ad-agency savant is known for composing inspired campaigns on the fly. After work hours, bouts of heavy drinking alternate with bedding extramarital partners who are left begging for more. Then this world-by-the-gonads member of the creative class heads home and puts the children to bed—before enjoying some banal but topical spousal conversation about a fast-changing, late-sixties milieu.

No, this isn’t a recap of a Mad Men episode, but a rough précis of Simone de Beauvoir’s Les Belles Images, a 1966 novel about a professionally sure-footed yet spiritually unfulfilled ad-woman named Laurence. The novel’s sole English translation is out of print—perhaps because de Beauvoir’s existentialist attention to the empty form of betterment aligned with the late-sixties “good life” is far less market-friendly than the soft-focus anomie of the AMC franchise. Mad Men–branded suits—an “exclusive” creation of the show’s costume designer, Janie Bryant—will always look handsome enough in a Banana Republic display window, quite aside from the show’s content.

I learned about Les Belles Images by reading Mario Vargas Llosa’s collection of essays and criticism, Making Waves (newly reissued in paperback). Responding to literary fashions circa 1967, which held that de Beauvoir was a tapped-out, old fogey writer of fiction, Vargas Llosa threw down like so: “Quite wrong . . . although faithful in its contents to the existential postulates of ‘commitment,’ . . . [it] is similar, in its writing and structure, to an experimental novel.” Eventually, I found a used out-of-print copy of Les Belles Images at New York’s Strand Bookstore. And I’ve spent the last few years of Mad Men mania trying to get coworkers and acquaintances to read it.

It’s not been the most welcome suggestion, despite the novel’s superficial similarities to television’s unofficial show of the moment. Strobing flashes of professional inspiration can rudely intrude upon Laurence’s domestic life, just as they do in Don Draper’s world. “The children made their way into a hollow tree and there they found themselves in an enchanting room all paneled in natural wood,” Laurence’s interior mind rhapsodizes, in the service of a client, as she looks upon her own daughters. “Follow up this idea. . . . I am not selling wooden panels; I am selling security, success, and a touch of poetry into the bargain.”

In other ways, though, de Beauvoir’s Laurence is quite remote from the world of Mad Men—a place where most characters mark time in the grip of various professional grudges while steadily getting richer. Most usefully, for our purposes, the novel’s protagonist allows herself to adopt a consistently critical stance in relation to her work and its too easy manipulations.

The contemporary viewer of Mad Men—who might be a bit smugly proud of understanding the subtle, sidelong glance the show can cast on the various ignorances and hidebound social forms of yesteryear—may well be taken aback by how quickly de Beauvoir picked up on such themes in real time. According, variously, to Laurence’s husband and stepfather, who take turns sounding very much like a mid-century Thomas Friedman, all that’s left is for “the world to become one country” as “the gap between the capitalist and socialist countries will soon be done away with.” But Laurence has memories of the very recent past, recollections of the Holocaust and the Resistance that lead her to question why the late-sixties march toward progress admits of no sadness over Algeria or why the images of civil rights protesters in America seem to be forgotten just as soon as they flash across the world’s TV screens.

The many shades of femininity in Mad Men are parceled out among its (admirably) large cast of woman characters—but de Beauvoir’s focused portrait of a woman, and her rigorous attention to Laurence’s subjective perception of the world, makes for a tougher, more worldly account of gender inequities. On Mad Men, one never knows quite how deeply the depiction of a clueless, not-yet-retrograde man—a boorishly ignorant doctor or a harassing superior—is meant to resonate thematically. Is the noxious event setting up a broader insight or critique? Or is this just part of the period verisimilitude of the show, akin to its unfailing attention to the right cabinet cozy or comb lubricant that was all the rage among the privileged class of 1963?

Laurence is more established in her career than Mad Men’s best-known striving career woman, Peggy Olson (Elisabeth Moss). Still, like every other woman struggling to make a name for herself in a 1960s workplace, Laurence is regularly subjected to the windy bromides of her superiors in the patriarchy. “Personally, I believe the future belongs to women,” one blowhard dude eminence says at a party. “Maybe. But only on condition that they don’t ape the men,” answers another. “Feminism: at present everybody was talking about it all the time,” Laurence thinks to herself, with droll detachment.

Laurence also gives expression to the claustral, trapped-at-home anxieties represented by Draper’s ex-wife, Betty—a veritable poster wife for the “problem that has no name” as diagnosed in Betty Friedan’s The Feminine Mystique. However, the resemblance here truly is passing: Laurence has thought more provocatively about those issues than the lady of the Draper house, played by January Jones with either studied blandness or just blandness of the plain-vanilla variety. In the same paragraph where Laurence realizes she obsesses over work at home and dreams of domesticity in the office, de Beauvoir writes, “behold the lacerated state of the woman who goes out to work,” before adding a contradictory jab, nested in a parenthetical aside: “She used to feel far more lacerated when she did not have a job.” By endowing a single character with all these modes of thinking, de Beauvoir makes sure that the philosophical question of alienation that plagues her protagonist—namely, “Why am I not like everyone else?”—remains consistent throughout the story in precisely the way it hasn’t during Mad Men.

Name brands get checked, too, in Laurence’s milieu. Yet there’s never the feeling that an itemization of finery is there to make us impressed with the realness of the story universe. Laurence, a character to rival any in existentialism’s fictional canon, takes care of that all by herself; she contains such a multitude of disaffected moderns within her own skin that almost all of Mad Men’s women somehow seem descended from her—as, for that matter, does the series’ male protagonist, Don Draper.

During the show’s first two seasons, the character played by Jon Hamm did seem possessed by a desire to determine what kind of man he really was, as well as the total range of answers his countrymen might be willing to accept. But in more recent episodes he’s seemed alienated in no fundamentally distinct way from all the other unhappy comfort-seekers on Mad Men. Though he may flip through a volume of Frank O’Hara poems every now and again, his attention to the process of examining himself is hardly what you’d call sustained.

Laurence is wise enough to suspect that her own answers may not exist even in the crisscrossing fashions of the literary world. “What books? Proust can’t help me. Nor Fitzgerald,” she thinks. And then comes a move, or more precisely an inability to move, straight out of Beckett: “Yesterday I stood there in front of the windows of a big bookshop. . . . Which to start with? I did not go in.”

Despite the stasis implied in that scene, Laurence does forge a path forward for herself in plot-juicing ways. (Vargas Llosa’s essay is particularly good at describing the way in which Les Belles Images represented de Beauvoir’s riposte to the flattened affect of the nouveau roman tradition, then much in vogue.) Without spoiling the ending, it’s fair to say Laurence figures out what to do with the lover, the husband, and the children in her life. That a novel about existentialist quandaries manages more narrative payoff than the first several dozen episodes of a serious television entertainment is no small thing. And it’s an achievement that comes from what Vargas Llosa identified as de Beauvoir’s main statement in her novel: that progress “must be at once material, intellectual and moral, or it will simply not be progress at all.”

So what happened to de Beauvoir’s book? Did anything unique conspire to render it an underground, word-of-mouth work—aside, that is, from the usual suspects in publishing’s lineup of economic vagaries? The cover of a seventies British mass-market edition of Les Belles Images gives at least part of the game away. Seen, from behind, upright on a bed—naked (as will happen) aside from panties and a floppy sunhat—sits a lithe, vacationing Laurence, regarding her own visage in a small, cute mirror. It means to look pretty sultry, as though the novel were a steamy beach read.

Here’s a slice of how Laurence really experiences luxury travel in the novel: “Clever advertising had made them believe that here they would be thrilled beyond all expression; and back home no one would dare to confess that he had been quite unmoved. They would urge their friends to go and see Athens and the sequence of lies would go on and on—in spite of all the disillusionments, the pretty pictures would remain intact.”

Anyone drawn in by the novel’s cover in the seventies would have probably felt deceived by that particular advertisement after only a few pages. This wasn’t a good enough lie to get passed on from one consumer to the next, and so the novel made its inevitable way to the remainder table. Still, if the fire thrown by de Beauvoir in Les Belles Images is too hot for modern tastes, let’s at least allow the novel’s absent presence to say a little something about the limitations of would-be smart television.

A great deal of our critical consensus now gathers in front of the small screen—and over the past decade or so, the arbiters of cultural debate have raised the stakes by likening the thirteen-episode installments of cable-drama storytelling to the stuff of literature. Simone de Beauvoir’s book can remind us how a moving-image medium may have a limited capacity to undermine the upper class’s very same church of les belles images. Any viewer succumbing to a case of acute image-fatigue during the beautifully composed fifth season of Mad Men would do well to consult Laurence’s testimony, in which the character tells us glumly that she has learned “too much about how a set was put together—it fell to pieces under her eyes.”