Have You Ever Been to Wheeling?

(Have You Ever Had That Feeling?)

Houses lean into the gold and brown hills. On the FM station someone sings “there on her face, a row of teeth he’ll replace.”

Ten thousand souvenirs and not a single one worth having.

A group of depressed elderly men meet on Tuesday nights for coffee. They call themselves the Chamber of Commerce.

A young girl, in a factory’s employee lounge, reads the recipe on the back of a soupcan for “How to Run Away With Your Boyfriend.”

What Doesn’t Move But Is Alive

I walked into the house, opened a beer and sat down in front of the TV. She was on the phone, arguing with her boyfriend again.

Channel 12. Footage of a cropduster

I could hear the tiny buzz of her boyfriend’s voice on the other end. The problem was, I realized, that she had come of age during the Carter presidency and he during Nixon’s.

“I’m not turning your identity down,” she wailed.

“Then why have I become gay,” he cried.

It’s after midnight and the baby is sleeping like a machine. The living room is lit amber and channel 9 is showing a burning fireplace all night long. Periodically the cameraman comes around and throws another log on the fire.

Everyone in the world is asleep, except the Orientals, and it leaves me as moved and thoughtful as when a president dies.

I open my wallet and pull out the Christmas list I’d found on the bus that morning. In small crabbed hand-writing it said: “Vodka, Cane, Ornament.”

The Mechanics of an Audiences Arousal

A young lady patiently waits to cross the street. She is a philosophy student, and while waiting for the traffic light she considers its evenly changing mind.

The light goes green and she steps off the curb. The driver whose mind is wandering does not see the light, strikes the girl, flipping her onto the roof of the car, he brakes and she rolls off onto the street.

She is cut, unconscious, and not breathing. A man in a brown sweater with a book under his arm kneels beside her and begins performing CPR.

He has never touched a woman this beautiful before. Her lips are full and soft. He sends his breath deep down inside of her. Everyone at the rescue scene becomes vaguely uncomfortable.

I was upset to find myself in Hell but I understood the nature of my sins and why I’d been sent there. I was looking around at all the condemned when one guy turns to me and asks what I’m in for.

Kaleidoscopes sell briskly in Nebraska. They are needed because the landscape is so simple and repetitive.

It was natural for the insurance industry to settle here, these are the most cautious people in the world. The companies build long buildings, low to the ground. Skyscrapers, it would seem, are flashy and unsafe.

The land was conquered and settled through the Invisible Wars of 1825. They were fought in an unusual fashion and casualties were high. Indians and settlers would check into hotel rooms alone and commit suicide. Eventually the settlers prevailed.

From the Book of Folded Arms

Astronauts appeared to the Virgin Mary. They floated down from the rafters on white cables and told her about the angels on Mercury, who are welded together into clumps. One gave her a box of icicles while the chorus sang “the sky is hung on a curtain rod, that runs straight to God.”

Meanwhile, the Pope was confounding all human discourse by “going to the bathroom” in the woods.

Black charcoal spirals are drawn on fences around town. They’re giving free tetanus shots at the entrance to the old amusement park. An old man on the radio talks about “the crime that will end all crime.”

Tonight the moon is swollen and the fountains are snuffed. The world gone still.

He finds her in the kitchen, staring out the window at the wheels turning slowly in the sky. He needs to know one thing before it all ends,

If there can be stairs in the river, can my name be in you?

Perkins stood on the ridge firing shots into the lake. He looked on calmly when he saw the black and yellow gear rise to the surface. He’d shot the scuba diver.

Of course he had to shoot the diver’s partner and the photographer who stood at the edge of the lake. And there was another witness that had to go. This would be the hardest one to kill. For this one he’d have to push the trigger not pull it. With his toe. 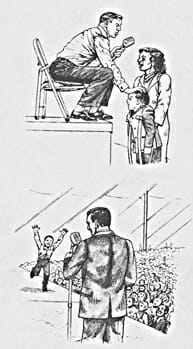 Johnny El, what a piano player. He rendered the keys waves. Look at this album cover, 1962. Leaning on the window sill of the clubhouse. A smeared audience out of focus behind him. Vice-presidents galore. The clicking drinks, the clinking dricks. A hundred dollar sunset over the golf course. A real estate picture moon over the log ride. Thousands of evenings on thousands of terraces,

The Surgeon General’s Report on Waiting

The situation in my country is this. Our poor love our rich, and our wives adore our wife-beaters.

It’s sad, yes, but let’s not talk about it. Even the subject of sadness will make us sad.

Here’s something else we do. In my country, when we’re waiting for someone who is very late, we stand at the meeting spot and smoke cigarette after cigarette. Then, when we die, we blame everybody who kept us waiting.

Men in our universities study primitive cultures, though historically, the natives have also studied us, crouched in the bushes, just beyond the arc of the camp fire’s light.

There is a tribe in the Amazon whose wealthiest members have their arms and legs amputated as a symbol of their status, to show that they will never have to work.

In an exchange program, wisemen from that tribe will visit here, to take in the psychological thunder of Times Square.

We were too poor to afford ancestors. Our nineteenth century forebears didn’t have indulgent nightmares about columns of marching grandfather clocks, which they didn’t write down in a diary, and isn’t in our attic in a trunk.

We defend the tuba, drive downhill for hours, sing “look away, look away,” and agree everybody’s a shoeshine boy for the murky powers.

The modern search for a mechanic you can trust takes us to the four corners of the town. We drag the lakes, and look under the cushions, always returning to our half-formed self saying “I am never who I want to be” and “I have one life in one world” so much depending on the only number you could never understand.

that it’s no wonder you live for the book

where all indians are trapped in all canyons.

It was a documentary on door-to-door salesmen. It had everything that makes a good film.

David Berman is an American poet, cartoonist, and singer-songwriter best known for his work with indie-rock band the Silver Jews.

Pictures from Home (Second Printing) by Larry Sultan. Mack Books, 192 pages. We first see it emblazoned upon the book’s. . .

Vice President Harris is a stranger in a strange land.

Can an act of interspecies violence bridge the human/animal divide?

Art for Keeping up with the Buttigiegs.

Keeping up with the Buttigiegs

On the campaign trail with Mayor Pete.