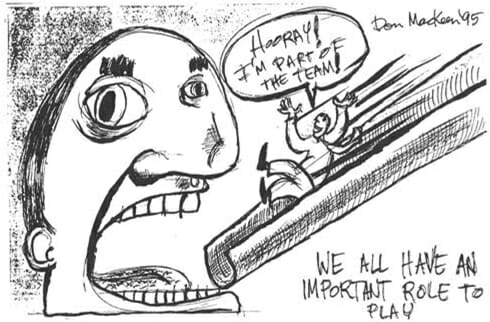 For more than three years in the mid-1980s, grassroots union activists and their supporters waged a remarkable campaign against the George A. Hormel Company of Austin, Minnesota. The high point of the struggle was a 10-month strike by Local P-9 of the United Food and Commercial Workers (UFCW). The strike lasted from August 1985 to June 1986, and ended when the UFCW international leadership placed P-9 in trusteeship and signed a contract capitulating to most of the company’s terms, including the permanent replacement of strikers. Well before the beginning of the strike, local activists had energized union members and their families, reached out for support from other trade unionists, and launched a corporate campaign against Hormel and its financial backers. For more than a year after the strike, these activists continued to promote a boycott of Hormel products and to encourage other meatpacking workers to stand up to their international union.

This struggle became a central symbol of rank-and-file workers’ resistance to management demands for concessions in the 1980s and appeared, at its height, to be on the verge of galvanizing a renewal of the American labor movement. In the end, the combined powers of the international union bureaucracy (with the support of the AFL-CIO hierarchy), the state and its National Guard, the Hormel Company and its backers, and the media, were able to crush the local.

From the start, the Hormel struggle was as much a cultural conflict as a political one. P-9 had to fight to have its point of view represented at all, much less to get a fair hearing. During the strike, Austin’s school board forbade teachers to discuss the conflict in their classrooms. Once the strike was over, opponents wasted little time seeking to eradicate any traces of it from the media and popular memory. Local radio, television, and newspapers eagerly announced the end of the strike in the summer of 1986 and hurriedly dropped a blackout curtain on all continuing efforts by strikers and their supporters. After taking control of the Austin union hall in the summer of 1986, the UFCW’s trustees sandblasted a 16-by-80-foot mural that had been painted by more than 100 rank-and-filers. This stunning representation of the strike’s place in labor history was wiped off the face of the hall’s exterior brick wall.

The easiest way to obliterate popular memory of the strike, of course, was simply to get rid of the workers. Once they signed the contract, workers found out that the company wasn’t planning on calling back any of the 1,000 remaining P-9 strikers and that only 300 of them would be placed on a recall list at all. Moreover, a clause in the contract allowed the company to discharge from this recall list any worker who actively advocated a boycott of Hormel products. Other workers were told to take retirement if eligible, or to take out “withdrawal” cards from the union. Many of the most committed rank-and-filers and strike activists were forced to leave town in a search for employment.

Given the power of these forces, it is amazing that any memory of the struggle was kept alive at all. But it was.

P-9 activists who left Austin took their experiences, memories, and commitments with them. Some headed to the Twin Cities or other nearby communities, while others moved farther away. Several of them soon emerged as union activists in their new workplaces. They and others found new niches for activism in the labor movement.

In the Twin Cities, P-9 supporters shifted gears into a wider effort to bring education, labor history, and militant strategies into the labor movement. Some launched the St. Paul Labor Speakers Club, which has sponsored a public educational forum once a month for the past 10 years, building a mailing list of 1,600 local union activists and supporters. In the early 1990s, Twin Cities activists organized the Meeting the Challenge Committee, which has sponsored five annual educational conferences and organized a variety of social events. They also engaged in solidarity work, organizing picket-line support for local strikes and fundraising for the locked-out Staley workers in Decatur, Illinois.

In Austin, retirees, former P-9ers, and their families also kept their story alive. In July 1987, when the Hormel Company and the Austin city government turned the 4th of July into “Spam Days,” these activists responded with a counter-celebration of “Cram-Your-Spam Days.” They marked their lawns with crosses bearing the names of replaced strikers, and they maintained a visible (and noisy) presence at the local festivities. They have continued to meet weekly as the United Support Group.

Their most public expression came in August 1995, when P-9 veterans organized a series of events to mark the tenth anniversary of the beginning of the strike. They held a parade and a rally that brought exiled activists back to town, together with former supporters and other people who had more recently learned about the struggle. The Hormel Company was so concerned about the anniversary celebration that it scheduled work on both Saturday and Sunday for the first time in more than a year. Some workers skipped work nonetheless.

In December 1992, a group of former strikers who had finally been called back to work regained control of the local union from the scabs who had held office since the end of the strike. While they remain caught between the company and the international union, they have rebuilt the local and undone some of the damage done during the trusteeship.

Like many other notable struggles in American labor history, the Hormel strike may have been defeated. But the strikers never became defeatist, never assumed the role of victims. They continue to hold their heads high and contribute to the vital project of the rebuilding of the labor movement. And their story has been kept alive.

The World of Yesterday

In December 2016, after that now-infamous Western political cataclysm, my then-boyfriend, a German, gave me a book by Austrian author. . .

Waiting for the school bus in Abu Dhabi one morning, age eleven, I sleepily registered the final moments of a man falling off. . .

Art for We Are the Main Event.

Why the internet remains a tool of American hegemony.