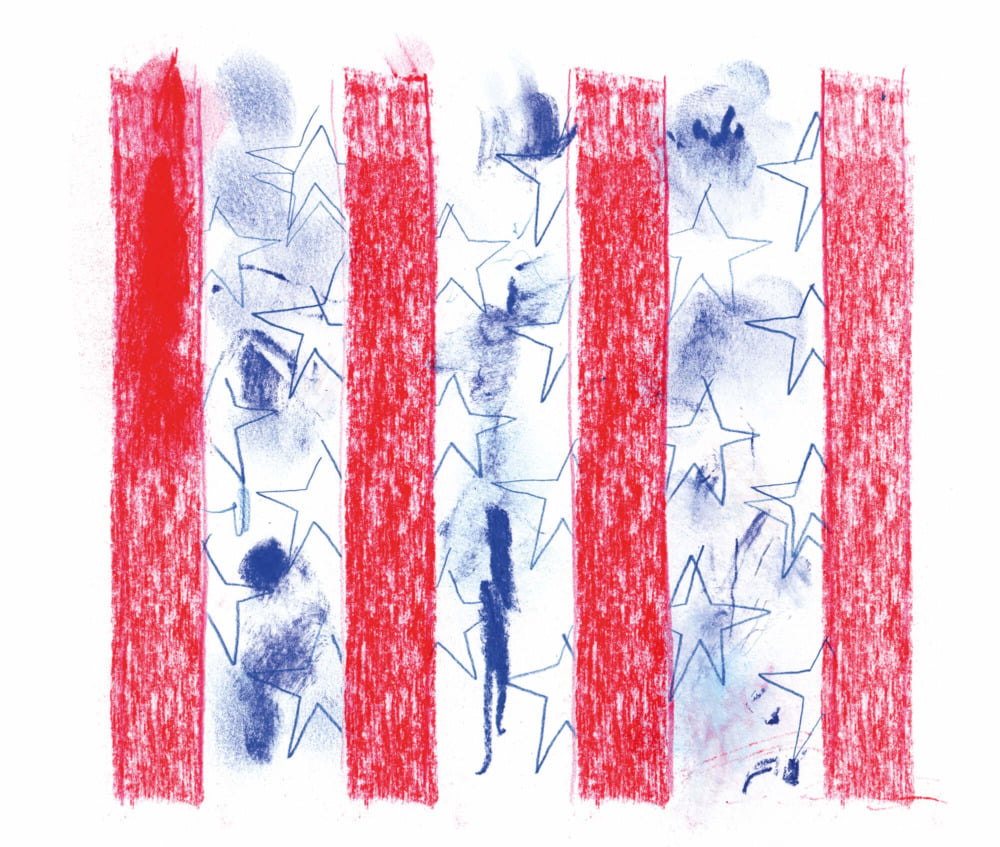 At the end of Moby-Dick, after the Pequod is splintered by the white whale, a coffin bobs up from the sinking wreckage, and Ishmael, treading water in the South Pacific, climbs on top of it. Over the next day, as sharks glide peacefully by, Ishmael floats “on a soft and dirgelike main.” Finally, a passing ship picks up our narrator and hero. Thanks to the buoyancy of the casket and the decency of the ship’s crew, as well as the long-established practice of rescue at sea, Ishmael lives to tell the tale.

This March in the Mediterranean, casket-like buoys were spotted floating on the water. Greek authorities had begun pushing migrants into bright orange floating tents, leaving desperate people who had tried to reach Greek shores adrift on a sea that has become the grave to thousands in recent years. The floating deportation camps are an instrumentalization of the practice, seen in recent months, as well as in decades past, of governments denying asylum seekers not only asylum but the chance to even make a claim for protection. It is a tactic wielded in the United States, Australia, the EU, and Thailand. New reports this August describe Greece having recently expelled more than one thousand refugees to the edges of their territorial waters and abandoning them in overburdened rafts. The United States, meanwhile, is similarly expelling thousands of migrants, thousands of children—including babies—to dangerous border towns in northern Mexico.

This past June, the Supreme Court ruled on a case that weighed two ancient legal concepts: asylum and habeas corpus. The case dealt with Sri Lankan asylum seeker Vijayakumar Thuraissigiam’s right to contest an initial ruling on his claim in front of a judge. Justice Alito, writing for the majority, asserted the government’s right to dismiss asylum seekers’ claims without review by habeas petitions and then swiftly deport them. Both Alito’s opinion and Justice Sotomayor’s dissent cited centuries-old English common law and early American constitutional law. But they might have gone further back, to the origins of both habeas corpus and asylum—to the origins of these words—for a more revealing history.

Even while being stripped of their meaning by courts and federal agencies, these concepts reflect how we might live together in an era of mass forced displacement, when more than 1 percent of the living have been forced to flee their homes. The legal divorce of asylum and habeas corpus from their meanings amounts to a forfeiture of two of humanity’s indispensable decencies. Hospitality and mutual aid—not border walls or detention centers—are what serve as our real protections. In a time of global upheaval, climate change, and pandemic, we need different models and analogies besides war and invasion.

Habeas corpus is a brocard that translates to “having a body.” [1] It is invoked most commonly when a detained or imprisoned person reminds a ruling power that they have a body—that it has been confined, and confinement must be subject to due process in a court of law. In her dissent in the Thuraissigiam case, Justice Sotomayor, citing a nineteenth-century English legal scholar, called habeas corpus “that foundational and ‘stable bulwark of our liberties.’” In her book Sanctuary and Asylum, Linda Rabben writes that habeas corpus “may have evolved from royal laws protecting sanctuary seekers.” And those royal English laws were explicitly modeled on a long tradition reaching back, through Roman law, as far as ancient Judaic codes providing refuge to the persecuted. The three Semitic religions—Judaism, Christianity, and Islam—baked the principles of asylum into their foundations. Those proto-asylum policies arose from hospitality traditions developed across cultures and over millennia.

In the U.S. legal system, asylum and habeas corpus have been wielded in different contexts—habeas corpus was included in the same article of the U.S constitution guaranteeing that slavery couldn’t be outlawed before 1808; less than a century later, abolitionists in northern states filed habeas petitions to offer fugitives a trial before they were shipped south back into slavery—but both concepts, however circumscribed their implementation, always hung on to their liberatory essence. By denying asylum seekers’ access to habeas corpus review, the Supreme Court fell in step with a spate of anti-asylum regulations enacted or proposed by the Trump administration, closing the door through which people can find protection in the United States. (For asylum seekers currently needing protection at U.S. borders, that door has effectively been bolted and bricked over.) These moves belong to a series of efforts that have enfeebled asylum practices and undermined one of the principle guarantees of human rights to come out of the genocides of World War II: non-refoulement, or the promise not to deport someone facing danger at home.

Though the principle of asylum goes as far back as history itself, the Greeks were the first to codify asylum protocols and coin the word. As maritime technology developed around 1000 BCE, commerce and plunder—the stories of which Homer sang—further connected the Greek islands, the latter becoming such a problem that new laws were required to delineate sacred spaces off-limits to the bandits. Sylos is Greek for plundering—a-sylos is a space off-limits to plunder. The end of meaningful asylum implies a reign of unmitigated plundering. Asylum doesn’t only protect the asylee, but it protects—as one of its original pillars—the very institution of protection. To offer refuge is to create a refuge, not the other way around.

The designated sanctuaries of the Greeks—altars, temples—came to be spaces where people charged with crimes, including political enemies, could find refuge. In Sophocles’ fifth-century BCE play, Oedipus at Colonus, the wizened, blind, incestuous patricide, led by his daughter Antigone, seeks refuge in the sacred grove of Colonus. Though the population of foreign born had been rising in real life Athens—with tensions brewing—in Sophocles’ play the Athenian elders, respecting the sanctity of asylum, let Oedipus take refuge.

As more and more people are uprooted and unroofed, we can either attempt to block migrants with walls—both bureaucratic and bollard style—or welcome them.

The Greeks gave us not only the word asylum, but also xenos—meaning stranger or guest—the root of the word xenophobia. And while xenophobia—fear of the stranger—is the most common word derived from xenos that appears today, enmity and nativism aren’t all that stem from it. The Greek concept of xenia, or guest friendship, embodies the principle that one welcomes a stranger or a traveler into their home. In The Iliad, Glaucus and Diomedes decide not to brawl because Diomedes’s grandfather had once hosted Glaucus’s grandfather for more than twenty days. In Troilus and Cressida, Shakespeare recalls the tradition when Nestor receives Hector: “I knew thy grandsire, and once fought with him. . . . Welcome to our tents.”

These conceptions of xenia became the linguistic base not only for the phobia so crushingly familiar to many migrants and asylum seekers today but for the more recondite term xenodochial—literally “stranger’s banquet”—friendly to strangers. In the Middle Ages, xenodochia were hostels or hospitals, and xenodochium pestiferorum were hospitals specifically for those suffering from the plague. As Emily Wilson writes in the introduction to her recent translation of The Odyssey, “Travelers, in an era before money, hotels, or public transportation, had to rely on the munificence of strangers to find food and lodging and aid with their onward journey.”

As more and more people are uprooted and unroofed, we can either attempt to block migrants with walls—both bureaucratic and bollard style—or welcome them. Stephen Miller, Ken Cuccinelli, Donald Trump—plus the tens of thousands of chillingly cruel or spinelessly acquiescent officers and agents who enforce their agenda of hate and refusal, as well as the tens of millions of citizens who excuse it, ignore it, or even celebrate it—are not only denying humanity to migrants and asylum seekers, they are undercutting some of society’s most elemental principles and bleeding out our democracy. Stamping the imprimatur of the highest court onto a xenophobic agenda, refusing the pleas of children at the U.S. border, automatically expelling asylum seekers, or locking them up in teeming detention centers—none of that protects a nation. Instead, it infects the nation with something that threatens us all: our backs turned to basic human decency.

[1] Habeas corpus is Latin for “you shall have the body” (but is sometimes translated as “produce the body”), meaning the person charged with a crime must be brought into a courtroom to hear what they’ve formally been charged with. Intended to protect against unlawful and indefinite imprisonment, habeas corpus was written into Article I, Section 9 of the United States Constitution.