The long-running comics-page saga of Mark Trail is certainly one of the most overlooked theoretical treasures of our age. Aside from the popular Sunday installments of this cartoon chef-d’oeuvre, Mark Trail is rarely followed and, to these critics’ knowledge, has never been rigorously analyzed. How its wunderkind authors, the enigmatic “Dodd and Elrod” (their first names remain, appropriately enough, cloaked in mystique), have avoided the baleful gaze of the critic’s eye, is truly baffling.

By way of preface to those unfamiliar with the world of Mark Trail, we offer this brief synopsis. The daily Mark Trail strip revolves around a small coterie of individuals, dominated by the masterful yet self-effacing woodsman Mark Trail. This central figure is surrounded by a handful of close confederates: his female companion Cherry, his devoted young follower Rusty, and his faithful but slow-witted canine Andy. The plot of the comic is uncannily predictable as Mark goes through an endlessly repeating “Adventure Cycle”: he encounters his foes-to-be, who are secretly perpetrating various frauds involving animals. He or one of his allies discovers the true nature of the evil ones, usually stumbling by chance upon their nefarious operations. The individual is subdued somehow by the badmen, then promptly freed after an overwhelming display of Mark’s pugilistic prowess.

Through the subtle workings of the Adventure Cycle dialectic, Dodd and Elrod entertain their devoted followers, who are always assured of the eventual outcome: Mark will vanquish his foes, and order will be restored to “Lost Forest,” his home ranch. Even the ingenue can feel comfortable with Mark Trail after a few installments. While every character wears identical clothing, villains are easily recognizable – they address Mark as “Trail” and wear their hair in styles significantly different from his. Mark’s confidantes, of course, call him “Mark” and do not attempt to dazzle the audience with duck-tails, sideburns, or lengthy locks.

We mention a “subtle dialectic” above in relation to the strip’s Adventure Cycles. In fact the many dialectics implemented by Dodd and Elrod are rigorous, inflexible and inexorable in the purest of Hegelian modes. The engagement of the dialectic by the cartoonists reflects T.W. Adorno’s pertinent insight that

only an essentially undialectic philosophy, one which aims at a historical truth, could maintain that the old problems could simply be removed by forgetting them and starting fresh from the beginning. Only in the strictest dialectical communication with the most recent . . . philosophy . . . can a real change of philosophical consciousness prevail.

Dodd and Elrod employ the dialectic at a variety of levels throughout Mark Trail, the most readily apparent of which is, of course, the strip’s basic 6 to 8 week Adventure Cycle. The dialectic informs daily installments as well: the splitting of each strip into three, the tripartite dialogic division, and the tendency of Dodd and Elrod to picture three figures in each panel all point to the underlying framework of thesis, antithesis, and synthesis. Taken by itself, though, this reading could be labeled an oversimplification of the Mark Trail text, were not its obvious Freudian overtones taken into account.

In his timeless psychoanalytic formulation, Jacques Lacan manages to grasp at the essence of Dodd and Elrod’s philosophical agenda. “What we have been able to unfold,” he surmises,

concerning the incidence of the signifier on the signified suggests its transformation into:

We have shown the effects not only of the elements of the horizontal signifying chain, but also of its vertical dependencies, divided into two fundamental structures called metonymy and metaphor.

Much more than a conventional semiotic analysis of subject/object phenomena, Lacan unwittingly reveals the fundamental psychological latticework constructed by Dodd and Elrod in the Mark/Cherry juxtaposition, noting that

The Verdichtung, or condensation, is the structure of the superimposition of signifiers which is the field of metaphor, and its very name, condensing in itself the word Dichtung, shows how the process is connatural with the mechanism of poetry to the point that it actually envelops its properly traditional function.

Lacan’s insight is useful, indeed, in explicating the domestic politics of Lost Forest, but it fails to offer a satisfying nexus of explanation concerning Dodd and Elrod’s Calculus of Hairstyles. According to the monumental O’Brien study of 1965, the cartoon hairstyle embodies the essence of “signifier,” of “bearer of meaning.” Derrida comments

Dodd and Elrod’s insistence on uniformity of garb, however, is deeply problematical in this respect. But perhaps the uncanny similarity of vetements in Mark Trail may be illuminated by Derrida’s notion of “l’objet oblong”–the dual breast pockets on every character’s buttoned shirt-with-collar, the similarly-fitting dungarees which sheath each figure’s shanks, and the sensible shoes of which there is never a complaint–would certainly seem to bear out this hypothesis. As Derrida continues,

An umbrella indeed! This otherwise common contraption is conspicuously absent from the comics-page doings of Mark Trail. Perhaps Dodd and Elrod wish to impress their readers with their sturdy protagonist’s invulnerability to the elements. 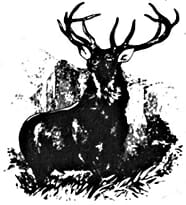 But the most telling theoretical touchstone for Trail analysis is the somewhat inscrutable use of exclamation points at the end of nearly every passage (with the exception of questions). Sentence structure is uniformly simple throughout, and slang is confined to the speech of confirmed rascals. Michel Foucault penetrates this enigma skilfully when he writes that

. . . in this region where representation remains in suspense, on the edge of itself, open, in a sense, to the closed boundary of finitude, we find outlined the three figures by means of which life, with its function and norms, attains its foundation in the mute repetition of Death, conflicts and rules their foundation in the naked opening of Desire, significations and systems their foundation in a language that is at the same time Law.

This exegesis of Foucault’s is illustrated effortlessly by what many feel to be Dodd and Elrod’s supreme achievement: the Tony Marko episode of April–May 1986. Faced with sudden death at the hands of an irate moose, Marko chose to ignore (misconstrue?) Mark’s simple cautionary message, “Tony, run this way!”, plunging to his death as a result. Ironically, the altercation which precipitated the demise of the sideburn-sporting Marko arose over a disputed tape recording of Marko’s voice enunciating certain incriminating syllables. Jean Baudrillard offers this insight:

Defiance is not a dialectic, nor a confrontation between respective poles, or terms, in an extended structure. 1t is a process of extermination of the structural position of each term, of the subject position of each of the antagonists, and in particular of the one who hurls the [text missing in original]

One Vow After the Other

Let me had been the star watching that night in 1978, the rain battering the building like a child yelling More!

Looked up and saw on a telephone wire the most unbelievably beautiful black crow in East Oakland’s history.