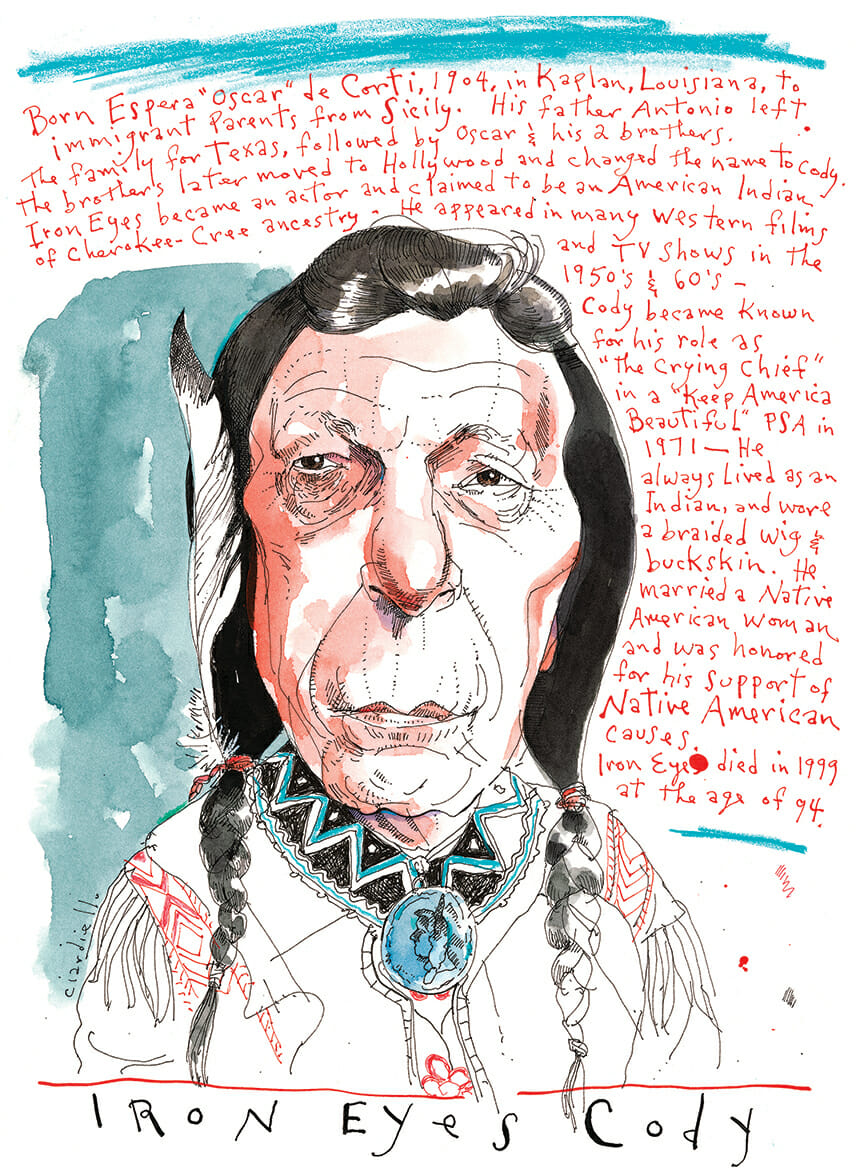 “The Crying Indian” (1971) was one of the first television commercials to forge the link between advertising and authenticity. Toss a Styrofoam cup out of your car as you speed down the interstate, and you will make an Indian cry. Only he’s not crying, and he’s not an Indian (he was Sicilian, actually), a term that owes its origin to Columbus’s misapprehension about where he landed, the idiot. But don’t tell that to Hugh McGraw, who claims the title of copywriter on the iconic ad, part of an Earth Day PSA campaign.

The name of the company was Marsteller. The old man who ran it—I imagine he had some connection to the so-called Keep America Beautiful committee, which was a bunch of packaging people, mostly. Makers of cans, bottles, plastic bags, all the crap that was appearing in litter. And it was giving them a bad name. So they came to the agency and said, “We’d like to do something to stop littering.”

I got the assignment, I who, as a child, always dressed up as an Indian, and in fact preferred to be an Indian. Which is a natural childish thing to do, right? I mean, they look like they’re living in nature, in good nature, and all that stuff. Every Halloween I was an Indian.

I went in my office, with a lined yellow pad, and I just envisioned: What would a Native American from five hundred years ago think if he could walk in this industrialized horror? I put him in the canoe, and he passed through time. He came out of the 1400s or 1500s or whatever you want to make it. They were here, what, ten thousand years? There were some people who came up from South America, across the Aleutians, forty thousand years ago. That’s the last I heard.

So I thought that would be an interesting way to do it. Paddle down the river and you begin to see civilization. And smokestacks.

The agency looked at it, approved, and said, “Yeah, it’s interesting, it’s good. Let’s present it.” So we had a presentation with the Keep America Beautiful committee, which was a boardroom with fifteen, twenty guys sitting around, all in suits. And the commercial was described, and there was dead silence.

And I looked at my art director and said, “There it goes. It’s gone.”

But our suit says, without missing a beat, “That’s exactly the point.”

And it was only then that I realized what the point was, because I had just written the commercial, you know. And I knew it was right, but I hadn’t thought it through.

The way the commercial turned out, it ended with him walking up to the apron of the highway, and he’s standing there, and someone throws a bag of shit out of their car, and it lands at his feet. And the camera pans, and there’s a glycerin drop coming out of his eye.

Then they turned around and put that piece of shit at the end of it that says, “People start pollution; people can stop it.” I couldn’t control that.

The actor, we thought he was Hungarian. We didn’t know. It didn’t matter.

This interview was recorded at a Cape Cod IHOP over morning eggs in August 2013, and has been compressed.