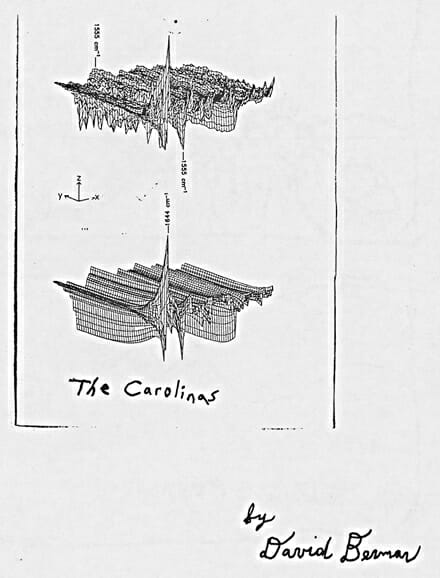 Orbit One—Far above my life, one trillion storeys up, above the silver judgement wheels, is a clear civilization, along the sidereal coast, a perpetual glide, where the rapid hearts sleep, where armrest factories puff, “we invite the nervous,” for warm firm handshakes immemorial.

Orbit Two—On the table is a glass of red soda, a traffic ticket, and a sketch of a telephone. Out the screen door I can hear two men arguing about a shed. The screen makes the whole tableau into a grid. I’m surprised when a cardinal lands on the window sill. I’ve only seen them on placemats.

Orbit Three—It was a revelation on a sled that brought him in from the cold white hills. To ask his wife, if in a city in the afterlife, she would recognize him on the street.

Imagination, memory in drag, called up a picture of an endless plane covered in sidewalks.

Orbit Four—In the painting, sky and ground run parallel. There is a palm tree and a jet. A forest stands in the corner, a set of antlers lies in the grass.

Off to left there is a river, but you can’t see it, it’s outside the frame. The river is full of old wheels and chain, but they don’t make it go.

Off in the distance, it’s very faint, there’s a hill. A man sold everything he owned to buy that hill. The agent said he would be able to see the future from up there, and that it would be the same future every time.

Orbit Five—Several thousand years ago there was a man who wanted to kill a very powerful man. In his own room he drew his sword and stuck it into the wall to find out whether his hand could carry through. By some chance the powerful man was standing on the other side of the wall and was thus slain.

And that is how I live out every one of my days.