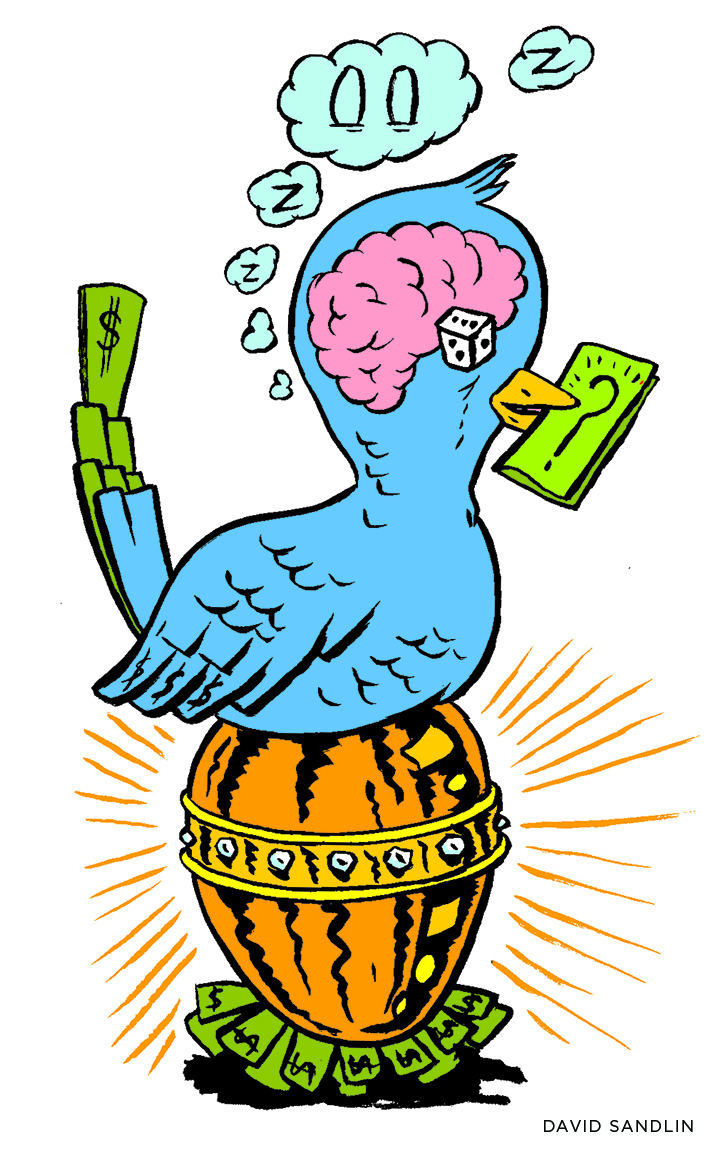 The National Lottery of Mexico is a government institution that organizes drawings for cash prizes. Introduced in 1770, the lottery was once a monopoly that sold tickets in even the smallest of cities. It fell into decline when casinos were legalized, and now it loses money, but the government continues to support it as a device for redistributing wealth.

At its height in the twentieth century, the lottery was a hugely popular symbol, a talisman. The drawings were broadcast over the radio and heard by listeners across the country with tickets in hand. The numbers were sung by a child, like a liturgy: a solemn decree read from on high. In 1921, amid the turbulence of the Mexican Revolution, the poet Ramón López Velarde went so far as to sing to the nation, “You live day to day, like a miracle, like the lottery.”

The religious metaphor makes God and the Virgin the bestowers of the lottery’s miracles. A coin tossed into the air or petals plucked from a daisy are not statistical noise but a signal, a message, an exchange with eternity. When we set in motion a random mechanism (spinning an urn full of lottery tickets; letting loose a tame bird to tell our fortunes by selecting folded slips of paper; slicing a Christmas cake with a figurine baked inside; rolling dice, shuffling cards), it’s like raising an antenna to listen for a heavenly voice.

It was the culture of Catholicism, after all, that invented the probability calculus. In 1654, the French mathematician Blaise Pascal proposed a method for analyzing how many tosses of a pair of dice would be likely to yield a pair of sixes. Later that same year, he had a religious awakening and entered the Port-Royal convent, where he wrote about grace and merit and came to think of life as a gamble, with the believer’s life at stake.

Playing the lottery means trying to make a connection with divine providence, giving God a chance to intervene in our lives, rejecting the narcissistic idea that success is due solely to our own efforts—in short, accepting grace over merit. It also means accepting a fundamental equality in which we’re all children of God, though some of us are more favored than others. Good luck is a blessing, a sign from heaven. Even bad luck acquires a deeper and more bearable meaning when it’s understood as inscrutable divine will.

Good luck is a less offensive privilege than merit. When accession to the throne is determined by birth order, the second- and third-born are considered unlucky, not unworthy. But when anyone (theoretically) can be president, the many who never become president are by definition failures. When money falls from the sky, those of few means are unlucky; when status and income are (theoretically) determined by merit, those who have less are deservedly inferior. Even when it leads to success, merit is merciless, lonely, bleak. Luck, meanwhile, is grace unbidden, whether it heaps Job with blessings or strips him of everything.

The lottery is a yearning for paradise: for the age of hunters and gatherers, before agriculture and work. According to Marshall Sahlins’s Stone Age Economics, hunter-gatherer tribes (which still inhabit some parts of Australia) don’t work: they talk (while they’re out shopping in nature) and they play (while they’re hunting and fishing). To live like this is to be “another being” (as Johan Huizinga says of play)—not as a pause, a diversion, or a suspension of ordinary life, but as ordinary life itself.

In Catholic countries, which favor holidays over the work ethic, there’s a joke: “How can work be good when it’s God’s punishment on us?” From the Fall into work comes the modern opposition between productivity and play. The ideal, of course, is to transcend the opposition: to be happily productive. Or, as in the lottery, to reap without working, to regain the freedom of the gatherer’s paradise.

The benefits of work can also be attained through play: creation, communion, freedom. Play is a simulation of need (goals, resources, rules, ambition, traps, success, or failure), happily divorced from need. It’s like the exercise of animals who attack each other but not in earnest, or who trap something they don’t need.

When we’re lucky enough to be happily productive, to have transformed need into freedom, play is an unwanted distraction. In paradise, there is no yearning for paradise.

Translated from the Spanish by Natasha Wimmer.