There’s a storm brewing on the horizon, a system forming from the pressures of rekindled urban decay narratives—gun violence, community unraveling, atomization, moral rot, or so the story goes—intermingled with the death of privacy as a virtue, the unremitting march of software supremacy, and a related turn toward technocratic solutionism.

All this is coalescing into a new surveillance regime, the ultimate and irrevocable merger of state and private power into a putrid omniscience. The signs are obvious, familiar, and tedious: elected officials hold up pictures of guns seized by local police departments and rail at indistinct “defund the police” movements that never meaningfully materialized or reached their goals but still serve as effective enemies. Opponents of handing the cops new and expensive resources are painted as ideologues who would rather sacrifice society on principle than turn to the benevolent algorithms synthesized to address our ills. The outcome is as clear and predictable as if we were forecasting a literal hurricane with barometers and humidity monitors.

At the forefront of this tempest, insistently banging the drum of surveillance tech, is New York mayor and self-described “face of the new Democratic Party,” Eric Adams. The former transit cop is the perfect avatar: a Black man who can credibly claim to be both a policeman and police reformer, a ready foil to his snide and anemic predecessor, preternaturally social and present at every crime scene, fire, and car crash he can reach in time to be photographed at. He’s a man of action, up late and rising early, tough yet debonair, dressed in well-tailored suits and pocket squares that give him the aura of an old-school big city mayor who is here to subdue the thrashing urbanity and bend it to his will.

Adams speaks with a forceful possessiveness that New Yorkers find alternatively off-putting or reassuring: “my police,” he’s been known to say, “my teachers.” He knows intuitively that the public is scared, fearful of Covid and crime and the high cost of living and all the grubby squalor and daily humiliations foisted on them by decades of incrementalism. He believes that they’re clamoring for him to step in and fix it. Not with long-term, systemic solutions that may radically transform their circumstances over time; no, they want it done now, and he has just the thing.

The slick new mayor is an evangelist for the new gods, whose altars lie west in Silicon Valley and who promise convenience, efficiency, cost-effectiveness, and accurate prediction. Some of Adams’s technophilia seems like a genuine positive, such as his pledge to create a single, centralized portal for New Yorkers to apply for government benefits, opening the door to a more complete and less arduous delivery of social services to those who need them. Some is gimmicky, like the mayor’s insistence that he receive his first paycheck in Bitcoin (or rather, convert it into Bitcoin, just in time for a market crash). Then there’s the dangerous, and there’s hardly a more menacing augur than his zeal for surveillance.

Somehow, Adams manages to be both glib and exuberant about expanding the police’s use of invasive technologies. In a January 24 press conference following his announcement of a “blueprint to end gun violence,” Adams said the city was looking into facial recognition technology, seemingly referencing the controversial firm Clearview AI. “Someone in eight seconds can take a picture of your face, and in eight seconds see everything that you have in public view,” he gushed. “That’s going to be used for investigatory purposes, and that’s what we’re going to use it for.”

In his telling, the adoption of the technology is happening, even if NYPD officials have privately insisted there’s no current plan to implement it. It doesn’t matter that it might require a new funding stream, or that under 2020’s Public Oversight of Surveillance Technology Act, the police would have to itemize and explain their use of the software. (Before that law, the NYPD had managed to for years purchase all manner of monitoring tools without so much as giving notice to the City Council.) According to Adams, it will happen because the mayor wills it, and he is vested with the authority of the public’s fear.

For those blissfully unaware, Clearview is a company that’s set out to compile every single publicly available image of a human face on Earth and make the totality of that database searchable based on matches with a photo uploaded by an end user. In theory, this could make almost every individual on the planet identifiable within seconds. It is a tool so potent that none of the massive, data-sucking tech colossi dared to pursue it themselves despite ample resources and a clear profit motive. Google—Google, of all companies—decided a decade ago not to pursue facial recognition tech at all due to the moral implications. This is the same conglomerate whose popular navigation app logs everywhere you go—but Clearview’s technology is their bright red line.

In the same January press conference, and then again while presenting his budget address in mid-February, Adams further alluded to “technology out there that will tell you if someone is carrying a gun,” which he is eager to get out on the streets. This was an apparent reference to scanners that can ostensibly use pattern recognition, heat detection, and other tools to detect guns hidden underneath clothing, throwing every single person against a digital wall and frisking them at distance, automatically and with no warrant or even the awareness that it’s happening to them. You can cover your face, but you can’t ward off the scanners looking at your heat signatures or change the way you walk.

It’s not like the NYPD doesn’t already have a formidable arsenal of gadgets whose surveillance potential would have been inconceivable a few decades ago. Cops currently have access to more limited facial recognition software, which they’ve reportedly used for crucial investigative purposes like identifying Black Lives Matter protesters, and they have lied about the extent of their existing ties to Clearview. The notorious Shotspotter system purports to alert the police whenever and wherever gunshots have been fired, sending cops with weapons drawn and adrenaline pumping to the scene of backfired motorcycles and busted generators. Even if a shot has been fired, Shotspotter’s alerts essentially kill the potential for any de-escalation response. The NYPD also frequently deploys so-called Stingrays, cell site simulators that can hoover up the cell phone data of everyone in range, regardless of their actual involvement in an investigation.

In every case, the police indicate that this technology will be used narrowly and for limited investigatory purposes, and then they never, ever follow this guidance, because who’s going to rein them in? Within this latest crime wave media cycle, the imperative has not been to examine why the police, who have a surveillance capability equal to the Stasi’s sweetest daydreams, have evidently failed to keep the public safe. Rather, it’s to give them ever more tools, until their capability to pry off any remaining shield of privacy is absolute. These interventions can’t and won’t address the factors that lead to crime, but, perversely, they may tamp down this perception of a crime wave through indiscriminate and heavy-handed pre-enforcement. Liberals will feel much more comfortable with stop-and-frisk when it’s at the direction of a lens and a motherboard, even as it puts what will effectively be lower-income communities of color under a pervasive and unforgiving microscope tinged with the veneer of scientific impartiality. During Biden’s State of the Union address last week, there was hardly a bigger applause line than his entreaty to “fund the police.”

This will only snowball. New York City has long been a trendsetter when it comes to municipal policy experimentation and pushing the boundaries of the extent to which a city government can shape its own micro-political economy. Its sheer size, diversity, financial might, and international cachet gives the metropolis a unique ability to take the first plunge into uncertain waters, often to great positive effect. A few months ago, New York became the first U.S. city to officially sanction safe injection sites. In the last few years, it has implemented semi-universal pre-K, instituted a municipal ID program, and launched a municipal managed-health program for uninsured residents. All of these endeavors have set an example for other cities and states to follow. But there’s a flip side here. As the panopticon descends over the five boroughs, it is the city itself that is being watched, by lawmakers and mayors across the country.

This era won’t produce a federal crime bill like the one that emerged from the bloodlust for punishment in the 1990s. We want things orderly, polite, the crimes prevented before they can ever occur. The allure of the technical solution is potent and has led local officials to adopt everything from automatic parole and sentencing recommendations to increasingly privatized education systems pledging to find “efficiencies” in what should be a basic public service—all to disastrous effect. Yet the temptation remains strong. Every generation must choose something to trust, and many of us appear to have been lulled by the algorithm’s gentle embrace. We’ll sleep soundly under its unblinking eyes—if we can sleep at all. 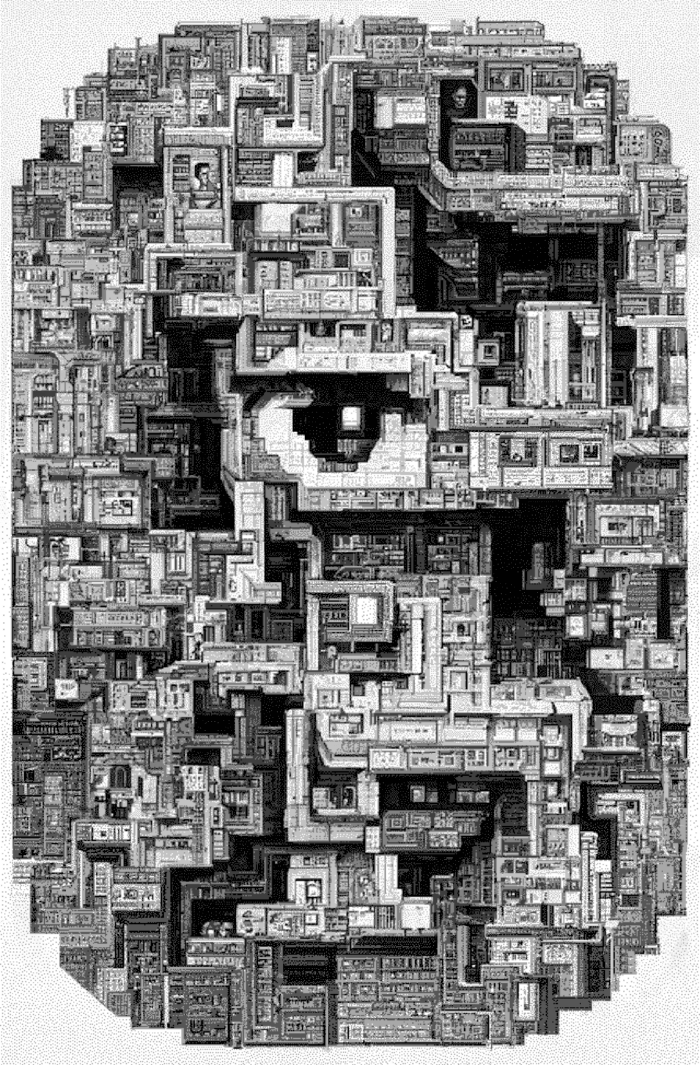