In 1997, when Jenny Holzer created Installation for Bilbao for the Spanish city’s newly opened Guggenheim, social media did not exist. Google had yet to be founded; dial-up internet meant listening to an inhuman caterwaul every time you connected; and when a webpage included a large image, one line of pixels arrived at a time, like tweets on a moving feed.

Twenty-two years later, the minimalist artist has returned to the Frank Gehry-designed museum with an extensive collection of new and archival works. Though “Thing Indescribable” is not quite a retrospective, the show covers her entire career, beginning with the series Truisms, a now-iconic set of phrases that she wrote between 1977 and 1979. Originally pasted up in public spaces around New York, they later made their way onto benches, electronic signs, and T-shirts, turning her words into public sculptures.

Truisms was followed by two additional series: Living and Survival (1980-82 and 1983-85, respectively), the latter of which contains some of her most famous phrases (such as “Abuse of power comes as no surprise,” and “Protect me from what I want”). Dark and sincere, pithy and expansive, these sayings were meant to seem ordinary, part of the fabric of society. With a shift of context, in an exhibition space, their tone becomes poetic and political, combining brutal pragmatism with an insistent hope for better. “Your oldest fears are the worst ones,” says one work; “Raise boys and girls the same way,” commands another.

At the Guggenheim, an entire room was dedicated to phrases from Living and Survival (it’s not always clear to a casual viewer which is which). The texts tile the walls on advisory monochrome metal signs (think “No Ball Games”), looping LED strips, and paper tracings—mostly in English, some in Spanish and Basque. Meanwhile, in the neighboring room, the Truisms and another text series, Inflammatory Essays, are printed on white and rainbow paper and meticulously stuck onto the walls, zigzagging around the viewer. It happens to look great in my Instagram post.

While the texts from Holzer’s works take their linguistic cues from maxim, cliché, and aphorism, there is undoubtedly a shift in how these short phrases can be understood in a post-Twitter world. When the President of the United States chooses big, beautiful, tremendous shortcuts to communicate, it no longer seems strange to expect meaning to come from ultra-brevity, whether it’s 280 characters or a set of four images of a brain exploding: they’re signs that tap into a circulation of meaning, of readymade images and words. Like Barthes’s conception of myth, social media can “abolish . . . the complexity of human acts, it gives them the simplicity of essences.”

What does it all mean? Nobody knows, and perhaps no one cares.

That’s one reason why Jenny Holzer’s short, shareable observations have obtained a new audience in the age of the internet, and with that audience, a more varied range of significance. Her works, printed on billboards and projected onto buildings, have always intended to prod at our engagement with mass media and advertising, but somehow, without the works changing themselves, they have both morphed and remained the same—what they lose in aura on social media, they perhaps gain in short-lived imaginative currency.

Yet Holzer famously doesn’t use social media, despite a bot bearing her name that has over 69,000 followers at the time of writing, tweeting out phrases used in her series. Her works likewise have a peculiar valence on Instagram, where the “inspiring quote” image is now a staple of countless successful brand strategies. On a recent scroll, I was fed an image of a breathy-looking heterosexual couple locked in a lip-biting embrace. The overlaid block caps read: “Know when to stay, learn how to leave.” The triviality was so numbing that I stared at it for a full ten seconds.

What does it all mean? Nobody knows, and perhaps no one cares. The Inspirobot website parodies this “inspiring quotes” trend, delivering an AI-crafted aphorism against an attention-grabbing but generic Insta-square image. “Try to impress society, don’t just get inseminated,” a half-blown dandelion advises. “First comes the mind-control, then comes the roses,” a chemtrailing airplane tells me. Another, block caps on a background of a human silhouette holding a flare: “Be physically attractive.” Right.

But both the AI parody of epigrammatic expression and the superficial attempt to gain followers offer a form of meaningless meaning, the lure of the relatable in a world where our divisions are starkly visible. What’s eerie about looking at Holzer’s work in this context is that, despite significantly predating this framing and its accompanying economies of attention, they appear to fit the mold so neatly. “With a sign or a poster in the street, you have the space of time it takes a person to walk a few feet. With Truisms, I offer what will work in seconds,” Holzer writes in the exhibition’s press kit. The social media manger today would tell you, it’s milliseconds.

When I asked Holzer, at the Guggenheim, about how the reception of her work has shifted since the advent of social media, she seemed reluctant to answer, asking instead for my opinion. She was far more comfortable talking about the machinations of power behind social media and holding those in charge to account. “Why doesn’t Zuckerberg do more? He’s a supremely capable man.”

This interest reflects what Holzer has always emphasized about her own works, and what is lost in their incarnation as memes—their physicality. While her work is clearly conceptual, Holzer is still invested in our relation to space. Flashing signs, projections, clothing: while they float from medium to medium, her words have a physical presence; she wants to remind us that power is maintained through space, bodies, movement, and pain.

And it’s power, more than anything else, that is the enduring theme of Holzer’s oeuvre. Her earlier works, where phrases are turned into physical objects in public space, often reveal hidden and unexpected power structures in the world. And her more recent work turns from the universal to specific abuses of power.

In the process, her interest in how art is encountered in space has become more apparent. One of the largest rooms at the Guggenheim show is dedicated to two such works: one, I WOKE UP NAKED (2018), consists of a 3.5 meter-long LED-covered beam hanging from a zip line. It shunts back and forth, dangling above the audience’s heads like a wooden plank on a crane, as the narratives of survivors of sexual assault and rape race along its sides. In a sickeningly exact portrayal of its threat, I WOKE UP NAKED jolts towards the work Purple, named after the color of the text running along its multiple curved legs. Here, reports of horrific sexual violence from the conflict in the former Yugoslavia provide the subject matter, which Holzer turns into a text she calls “Lustmord.”

It’s power, more than anything else, that is the enduring theme of Holzer’s oeuvre.

In another room, the high walls are paved with Holzer’s series of Redaction Paintings, where the artist reproduces documents that have resulted from Freedom of Information Act requests. Some appear to be government medical assessments—coldly stating, for example, the homicide of a prisoner in custody, beaten to death. Another, exhibited for the first time in Bilbao, replicates a document relating to Paul Manafort’s involvement in the Mueller investigation. The paintings, especially in comparison to Holzer’s earlier work, put focus on forensics and specifics: documents are blown up and painstakingly leafed with metal, reproducing the lacunae as faithfully as the data. Kinetics play a role again, as a spotlight moves around the room, highlighting one painting at a time. It’s a bid, I assume, against our minimized capacity for attention.

It’s evident that society’s relationship to power, especially the forms of power Holzer has long had in mind, has shifted precipitously—both away from and toward her work. The internet has accelerated the consumption and processing of information, and there are fewer obstacles to publishing anything whatsoever. Holzer’s Redaction Paintings, to name an example, are now colored by the document dumps of Wikileaks, which anyone can view. And Holzer’s strategy of pasting her posters in New York City is no longer the only way to reveal what’s behind the curtain. Abuses of power can be unsurprising to all who choose to listen.

More recently, this turn has been mirrored in the arena of sexual violence. When activists from an art-world-focused #MeToo offshoot needed a name, they turned to Jenny Holzer’s most famous proclamation, calling themselves: “We are not surprised.” In Bilbao, Holzer succinctly expressed her feelings about the contribution: “I’m just glad I could be less useless,” she said.

As I walked around the show in Bilbao, I began to think about the present day, especially the residue of advertising that marks everything and the struggle to capture and communicate nuance. I arrived at a red marble bench, half-falling over others in a group tableau: “Use what is dominant in a culture to change it quickly,” from Holzer’s Survival, was engraved on the top. Perhaps this phrase best describes how I see Holzer’s work: it uses what is dominant. But in an era dominated by social media, it remains to be seen whether things will change quickly or even at all.

Josie Thaddeus-Johns is a freelance art and culture writer based in Berlin. She writes for the New York Times, The Economist, the Guardian, and others. You can find her on Twitter @josiet_j.

Build It and They Will Pay
Andrew Friedman
Salvos 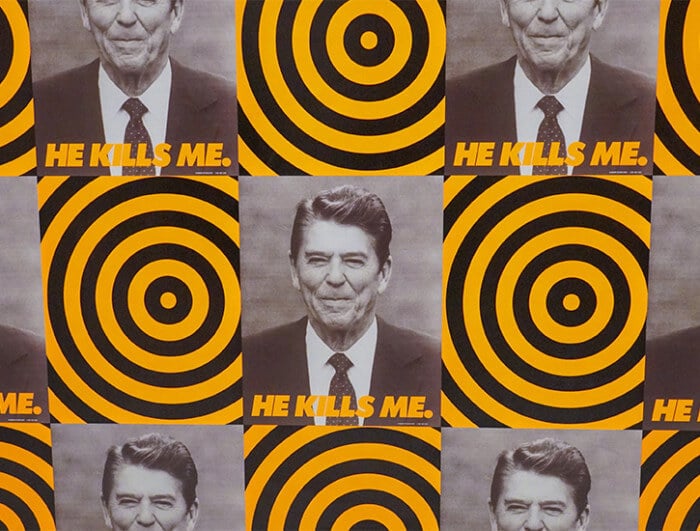