The removal of Confederate monuments is now being carried out by city governments. Or at least it’s being considered. Mayors in Lexington, Kentucky, and Charlottesville, Virginia, have ordered the removal or repurposing of memorials to racism. And Baltimore has already hauled away four statues. Even in New York, Mayor Bill de Blasio commissioned a review of the city’s “symbols of hate,” promising that “the commemoration for Nazi collaborator Philippe Pétain” will be the first to go. Yet we would have none of this governmental verve if not for the unsanctioned toppling of a Confederate memorial in Durham, North Carolina, on August 14, by a group that included black activists, anti-fascists, and members of the Democratic Socialists of America.

Meanwhile, the scorn of commentators is simmering. In his dispatch on de Blasio’s pending review, New York Times City Hall reporter William Neuman casts the mayor as an attention grabber who has opened the fabled “Pandora’s Box.” Neuman prominently quotes the historian Kenneth T. Jackson, who calls the move “McCarthyism of a reverse sort.” The idea here, a version of which was promulgated by President Trump and other nonreaders, is that once the destruction or removal or desecration of racist monuments begins, it will never end; it may well extend to our founding fathers or Christopher Columbus—through some form of unheard of sorcery—eliminating American historical memory forthwith. Of course, the reasoning behind this warning conceals a confession: if an iconoclasm against racist idolatry can spread even to our country’s founders, then our country must be rotten to its foundation.

Because of their fear and laziness, we should expect pundits to use this word— “iconoclasm”—more and more. The charge is historically familiar; since the French Revolution, those who fret over the prospect of mob rule and its imagined misfortunes have issued warnings about iconoclasm. In more recent days, this sophistry was played to weak effect by National Review columnist Jonah Goldberg, who believes a new “iconoclasm” omens a “plague sweeping the land,” one that may eliminate the mascots of our favorite sports teams as it otherwise gnaws at the roots of a quietly cherished white supremacy. It’s no surprise that Goldberg conjures the word “mob” three times in his polemic, and it’s likewise to be expected that he would compare anti-fascist protesters of Confederate statues to members of ISIS.

Since the French Revolution, those who fret over the prospect of mob rule and its imagined misfortunes have issued warnings about iconoclasm.

But can we be sure that the “Pandora’s Box” rationale has been thoroughly enough supplanted, or that the mayoral gambit to remove these monuments will retain its opportunistic energy? What began as an extrajudicial project to destroy the racist genii loci of a rapidly diminishing American communal space is already showing signs of slowing down, at least in the hands of elected officials. Mayor de Blasio, facing criticism that he dishonored the legacy of Christopher Columbus, now plans to walk in the Columbus Day parade. Also, he has yet to name a single appointee to his promised committee. When asked just last week at a Democratic primary debate with an opponent (now dispatched by yesterday’s vote) which statues he plans to eliminate, he meekly offered, “I don’t think it makes sense for me to opine on issue by issue.”

Which is to say that the new iconoclastic mob could soon have to consider taking the destruction of Confederate monuments back into its own hands, eschewing an incrementalist reason that would have all this cheaply made and recently installed neo-Confederate trash covered in garbage bags, or else installed in museums.

But why save these sculptures? The argument for putting unwanted art in museums is a longstanding Enlightenment-core posture, one that was itself born out of reaction to iconoclasm in the eighteenth and nineteenth centuries, when revolutionaries “vandalized” the oppressive monuments of the ancien régime, and when the members of the Paris Commune demolished the Vendôme Column, which they saw as a symbol of “tyranny and militarism.” The “compromise,” made at gunpoint with state authorities and conservative intellectuals, eventually led to the construction of the modern museum, which is today a site of capitalist patronage and institutional privilege.

You don’t need to judge whether these historical moments of iconoclasm were justified to understand that they were the consequence of reason—not mob logic. Each was in its own way an affront to hierarchy and inequality of the sort now rapidly accruing in Western capitalist democracy. But the prevailing distaste for iconoclasm is steeped in a callous piety, one that often takes recourse to the destruction of “degenerate art” by the Nazis. Obviously, the Nazis did destroy art—Hitler was, after all, a failed painter—but they also kept it for themselves, looted it, and sold it abroad. And they managed all of this with an appeal to “sound popular feeling” (gesundes Volksempfinden), a fact that should make Trump’s “Pandora’s Box” argument sound even more sinister.

Another piety: the Western tradition saves its art. The truth is, the scant few scholars of modern iconoclasm will tell you that no culture in history has precluded or destroyed more art; the “creative destruction” endemic to capitalism could just as well be understood in reverse, as the destruction of created objects. Gentrification daily undoes architectural works, parks, and other spaces; a vast entertainment complex relegates aesthetically superior works to the trashcan of history; climate change now threatens the galleries and museums of entire cosmopolitan centers. Yet those commentators who raise the specter of barbarian iconoclasm would rather have you forget that on February 24, 2015, a day when ISIS destroyed 8,000 volumes at a Syrian library, news reports simultaneously confirmed that the UK’s Manchester Central Library secretly disposed of more than 240,000 items in the course of a quarter-billion-dollar “renovation” scheme.

The modern history of art is a history of its iconoclasms, and it is has never been a unidirectional march of progress. Now, under Western capitalism, we’re experiencing the automation of iconoclasm—the reckless destruction of art works, monuments, and works of architecture by capitalist “redevelopment” and climate change. And its unthinking nature is finally being challenged by those who have so far aimed to remove its racist symbols, to make its destruction more deliberate. Hardly a mob, these new iconoclasts have proven themselves more educated and more inclined to action than their political representatives. This is to say that, given present conditions, the question in front of us is not whether artworks and monuments will be destroyed, but which will be destroyed, and by whom. 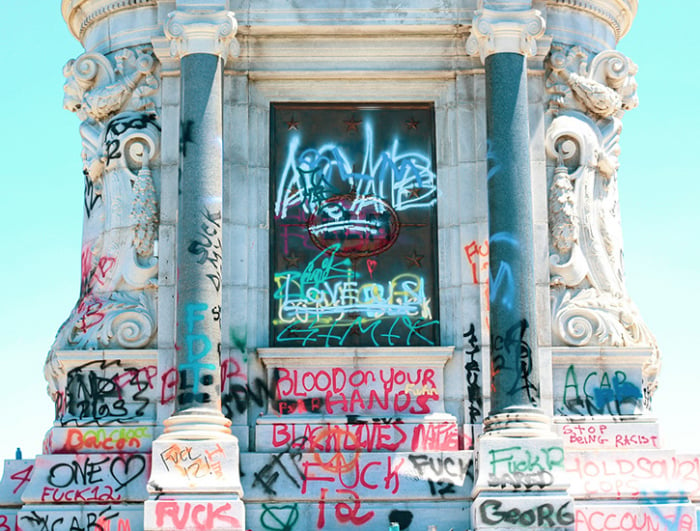 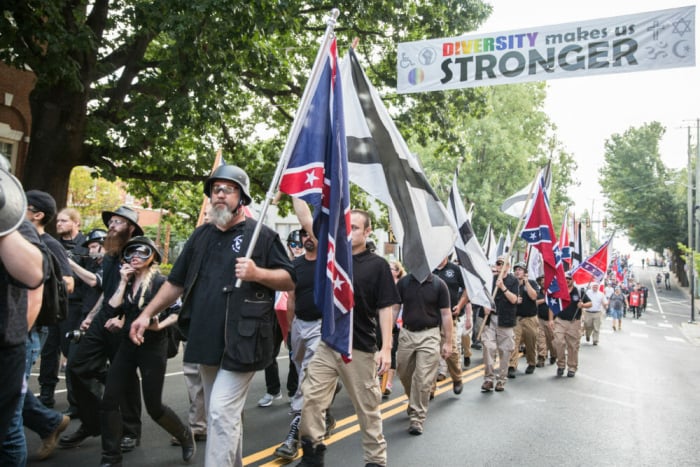 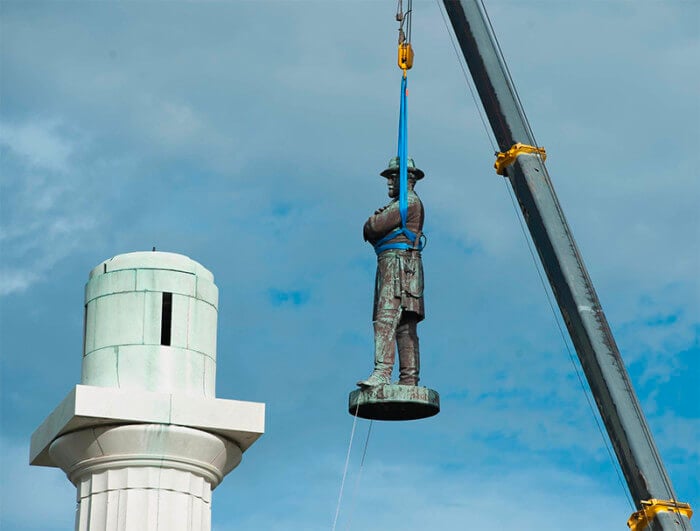 Last Gasp of the Lost Cause
Adolph Reed
Word Factory