On December 5, House Speaker Nancy Pelosi quoted the Declaration of Independence when she explained why the House would advance two articles of impeachment—implicitly comparing the current president to the kind of “oppressive monarch” the early nation broke away from. When the House voted to impeach Trump nearly two weeks later, Pelosi said it was a sad day for America but a “great day for the Constitution.”

Yet here we are. Those parchment documents that are encased in bulletproof glass in a “shrine” at the National Archives rotunda—our “American Scripture,” in the words of historian Pauline Maier—might as well be the Dead Sea Scrolls. They have little unifying power. They do not give us a clear path to restraining a would-be monarch, or even a misplaced mogul who slurs his words and thoughts in public and who lives in a world where laws and ethics are for the little people. Enjoy doing your “solemn duty” of upholding the principles of the Constitution, Democrats! The president declared your impeachment hearings to be an unconstitutional hoax, and he made it stick. The high ground counts for nothing when you don’t have the power to back it up.

And so, the impeachment process ended just the way Senate Majority Leader Mitch McConnell said it would. “I would anticipate we will have a largely partisan outcome in the Senate,” McConnell told the Louisville Courier-Journal, in December. “I’m not impartial about this at all,” he said.

Enjoy doing your “solemn duty” of upholding the principles of the Constitution, Democrats!

Exactly thirty days later, McConnell and ninety-nine other senators solemnly swore to “do impartial justice according to the Constitution and laws.” That oath required something improbable, of course. It’s all part of the show. But in the twisted logic that is a McConnell specialty, he was still able to find a way to make his own unyielding partisanship—his stated belief that “this is a political process” not a judicial one—into a noble stance against the evils of partisanship. At a dicey moment when he was not sure he would have enough Republican votes to block witnesses from appearing before the Senate “trial,” McConnell held a meeting with wavering Republicans and told them, according to a Washington Post account, that the role of the Senate is to serve as a check on the partisan moods of the House. “We simply cannot let factional fever break our institutions,” he said Wednesday on the floor of the Senate. In McConnell’s devious formulation, when Democrats waveringly challenge the president they are in a partisan fever, but when Republicans march in lockstep, petrified of the president’s power, they are defending “our institutions.”

Republicans in the Senate came to easy agreement that Trump’s abuses of presidential power are ultimately no big deal. Sure, Trump and his hapless consigliere Rudy Giuliani were plainly guilty of trying to put the arm on the president of Ukraine. So what? You can call it attempted bribery or extortion, but it’s fair to ask where it ranks in the annals of presidential crimes and misdemeanors. (It’s a long way from even being the worst thing Trump has done.) The Iran-Contra lawlessness during Ronald Reagan’s administration, for example, seems more serious. Reagan’s men violated laws regulating arms sales to Iran while also violating Congressional restrictions against giving assistance to the counterrevolutionaries in Nicaragua. The whole scheme was an end-run around the basic Constitutional principle that it is up to Congress to appropriate funds. Also, people got killed. Yet there were no impeachment hearings for Reagan. 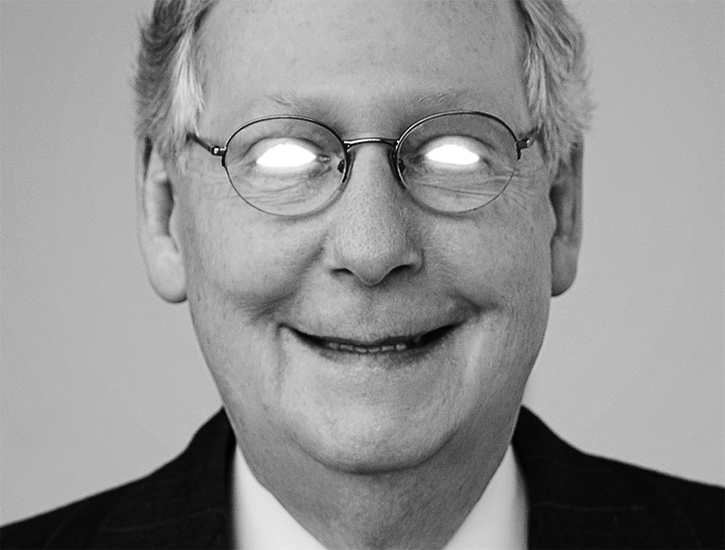 In the Kingdom of Mitch
By
Dave Denison

So, OK, you can see how Republicans might downplay the Ukraine affair. But to let Trump skate on the obstruction of Congress charge is a self-abnegating humiliation for one of “our institutions”—the Senate. One only has to recall the ideological and insolent letter White House attorney Pat Cipollone sent in October to Congressional leaders as they prepared to begin impeachment hearings. Throwing around claims of executive privilege and presidential immunity from any and all indictments, Cipollone declared that the House proceedings were deemed by the president’s lawyers to be “invalid” and “illegitimate,” and thus they would simply opt out. “President Trump and his administration cannot participate in your partisan and unconstitutional inquiry under these circumstances,” the hack lawyer wrote. Trump, of course, has no idea what is in the Constitution (he once referred to the emoluments clause as “phony”), but such a wholesale rejection of the Congressional oversight powers was shocking—even to some old-line conservatives such as George Will. “If Trump gets away with his blanket noncompliance, the Constitution’s impeachment provision, as it concerns presidents, will be effectively repealed,” Will wrote in October, “and future presidential corruption will be largely immunized against punishment.”

And yet there was not a single Republican in the House or Senate who seemed shocked by the obstruction. There were only two in the Senate who were even willing to vote to have a proper trial, i.e., by hearing from witnesses who could provide further evidence as to Trump’s abuses of power, at all. And in the end, only one lone Republican—Utah Senator Mitt Romney—was willing to stand up and vote to remove the president from power. Not such a “great day for the Constitution.”

Ah, the Framers, the Framers. All this talk about the Constitution was apparently offensive to Republicans who believe it to be their job to impose eighteenth-century ideas on today’s problems. There was a telling moment during the all-day House debate on December 18, which culminated in the vote to impeach Trump, when it was finally too much for North Carolina Republican Mark Meadows. “They all want to talk about . . . the Constitution. It’s Alexander Hamilton!” Meadows declared, implying he’d heard quite enough about Alexander Hamilton. “Listen, this has nothing to do with the Constitution,” Meadows said. “It has nothing to do with anything but raw politics.”

This outburst came a little bit after Vermont Democrat Peter Welch made exactly the kind of statement that was driving Meadows and other Republicans to distraction: “We the people have a common tie that binds us together now, as it has since the founding of our country, and it’s our shared respect for the Constitution of the United States.”

If the recent impeachment hearings proved anything, it was how wrong both Welch and Meadows were. There is no “common tie” binding us together, because we can’t even come to common understandings about what the Constitution means. And yet to say that the effort to impeach had “nothing to do with the Constitution” was to deny something obvious and important: the language Democrats kept invoking as if it should have magical powers—“high crimes and misdemeanors”—is, like so much of the antiquated verbiage concocted in that hot and humid Philadelphia summer of 1787, practically useless.

The fifty-five delegates who endured those marathon meetings imagined a Senate made up of educated, fair-minded, distinguished gentlemen. They expected popular passions to well up in “the People’s House,” but gave the power to hold a trial to the Senate. They expected senators to act as impartial jurors. Though they understood “faction” as a part of politics, they did not imagine the kind of partisanship we have now, which makes fair-mindedness nearly impossible, as the leader of the Senate admitted. (It should be noted that for all McConnell’s soaring rhetoric about the Senate’s role to resist the “factional fever” of the House, he happily went along with Kenneth Starr and Newt Gingrich in their hot pursuit of Bill Clinton in 1998. McConnell voted “guilty” on both counts.)

There is no “common tie” binding us together, because we can’t even come to common understandings about what the Constitution means.

The hardened partisanship typified by McConnell has not quite effectively repealed the impeachment clause, as George Will put it. But it can only be made effective under certain unusual partisan alignments. Any president who has a majority in the House and Senate can get away with anything. Any president who faces an opposition party in the House but not the Senate can be impeached but not convicted. Given that it takes a two-thirds majority to convict in the Senate, and given an asymmetric partisanship where the GOP is composed of rigid ideologues (so that even one dissenting vote is huge news) while the Democrats still have a bloc of wavering moderates, what must we conclude? A corrupt Republican can never be impeached except in the very unlikely scenario that Democrats hold a majority in the House and a supermajority in the Senate. Yet, a vulnerable Democrat might be impeached. It could happen if Republicans controlled the House and had, say, a fifty-seven-member bloc in the Senate, along with ten Democrats willing to cross over. They may not have managed it with Clinton. But if the United States ever elects a left-wing president, he or she will not be able to count on the kind of party unity the Republicans muster for any right-wing stumblebum who comes along.

This thought experiment tells us two things. One, Congress’s impeachment power is like so much else that is in the Constitution: it was developed for a country almost nothing like the one we live in today. Two, veneration of the Constitution as some sort of Oracle of Delphi—a source for all answers—is a losing game. The Constitution has always been an instrument of power. Those who hold power determine what it means.

James Madison mused in Federalist No. 48 about whether our “parchment barriers” would stand up against “the encroaching spirit of power.” The answer is no. 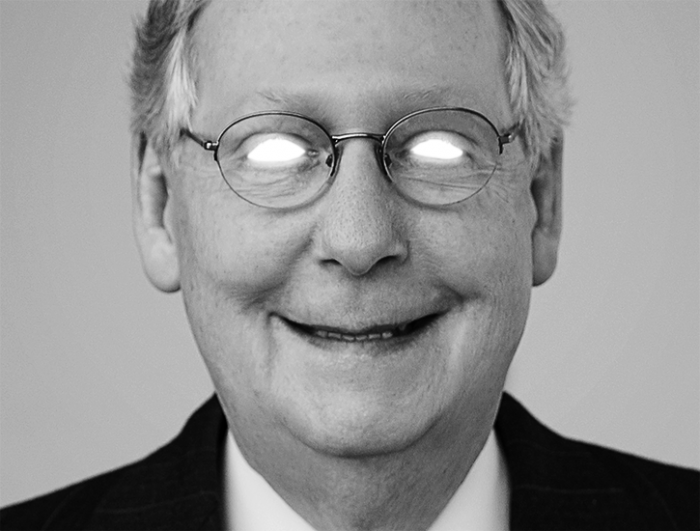 In the Kingdom of Mitch
Dave Denison
Columns 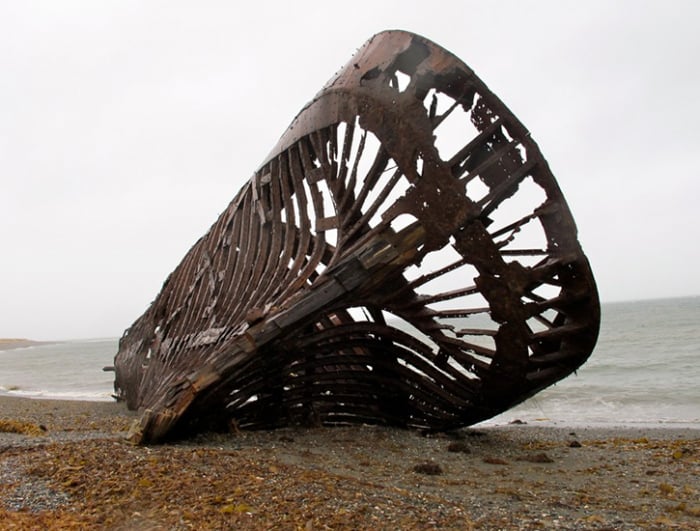