Jello Biafra wakes from a coma and really, really doesn’t like what he sees.

That is, in an opening sketch this season on the IFC show Portlandia, a punk character played by Biafra (lead singer of seminal 1980s hardcore band the Dead Kennedys) wakes from a coma he’s been in since 1986. He wanders the streets of Portland, dismayed by the artfully coifed and clothed inhabitants, all of whom seem perfectly self-satisfied as they go about their business, from eating at a sidewalk café to doing Yoga in the park.

This is a drastically changed vision of Portland from the first segment of the first season, when it premiered three years ago. That classic musical opener, “The Dream of the 90s is alive in Portland,” had proclaimed Portland to be a place where it’s okay to have no ambition beyond starting a band and working part-time in a coffee shop. But, now, in season four, a newly awakened Biafra doesn’t see a slacker utopia—he just sees a whole lot of Yuppies.

“How big is this Yuppie part of town?” Biafra’s character asks.

Biafra’s punk is confused because he has missed the transforming effects of the last two decades: the ever-multiplying streams of media and commercial culture that have developed to target different categories of people and cater to their different tastes. In the environment he finds himself in, the boundaries that matter are no longer between the mainstream and the alternative, or the commercial and the noncommercial, but between one type of taste culture and another. That’s not a distinction Biafra’s punk can see; all he sees is upwardly mobile consumption, and he’s right.

The characters that surround him also mirror the show’s own audience watching at home, too. Portlandia can exist in this “narrowcasted” TV landscape because enough members of its relatively small audience have achieved the young urban professional status advertisers are looking for.

In the late 1980s, ABC’s Thirtysomething turned Yuppie Baby-Boomers’ struggles with marriage and parenting, and their hand-wringing over how they’d compromised their 1960s ideals, into primetime melodrama. Portlandia, which airs its season finale tonight, is the Gen-X analogue, gently satirizing the cultural pretensions and political preoccupations of its audience throughout its four-season (and Peabody award-winning) run. This “slackersomething” satire is therapeutic to its audience at home; it works less to directly criticize or promote change than to help the audience “work through” what they’ve become.

The Biafra bit may be Portlandia’s most direct gesture toward the rift between “The Dream of the 90s” ideal of opposition to mainstream corporate culture, and the 2010s, where continued opposition seems undesirable (if not impossible). Portlandia is where Gen-X ideals have been adjusted. The frequent domestic settings on Portlandia suggest that compromised ideals have come under the duress of getting a job, getting hitched, sidelining the band, and maybe making a baby or two. Under these pressures, easy and reliable access to good coffee long ago trumped whatever those reasons were for dissing Starbucks in the 1990s.

The generation between the Boomers and the Millennials has grown up and grown comfortable with the commercialization of culture—a commercialization made more palatable because it has been accompanied by what feels like increasingly abundant choices in music, television, fashion, food, and so on, to satisfy many different idiosyncratic tastes. 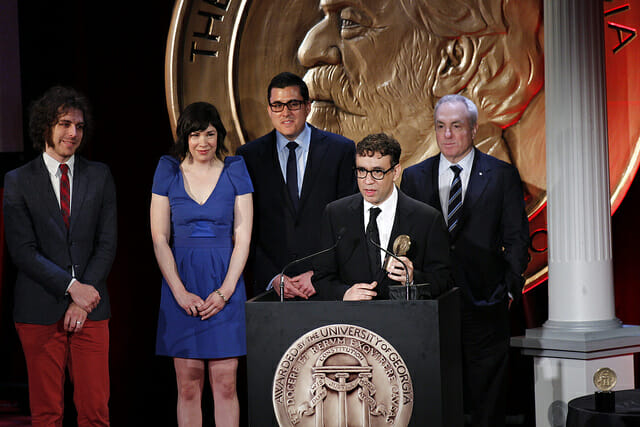 The cast and creators, accepting a Peabody
in 2012. Photo via the Peabody Awards

A key reason that the characters that populate Portlandia don’t see themselves as Yuppies is because their identities are largely defined through the accumulation of cultural—not economic—capital. Foodies don’t just eat expensive food. They seek out and savor and “know” food (read: expensive food). The “Yogis” aren’t conspicuously consuming through shopping, but by making their surplus of leisure visible by doing Yoga in public, en masse. Biafra’s punk sees this equation between economic and cultural capital, but Portlandia’s satire suggests that cultural capital—good taste—is a burden. Knowing too much, having tastes that are too cultivated, makes it difficult to order a meal, to buy a car, to attend a concert.

Portlandia routinely stages the burden of cultural capital when it comes to parenting. A sketch from season two features a confrontation at the Shooting Star Preschool over the school’s music library (on LP, naturally). These parents are not “helicopter” moms and dads who inappropriately meddle with the school curriculum or make demands about what other kids can bring to school in their lunch boxes. Rather, they are music connoisseurs who fear the damage done if mediocre music is allowed in the library.

When one parent suggests that there might be poetry even in Mike & the Mechanics, Carrie Brownstein’s character is outraged: “Poetry in the same way that ‘The Greatest Love of All’ by Whitney Houston is poetry! It is pabulum!” How can there be time in the curriculum for Krautrock with Mike & the Mechanics taking up space? “I’m getting very stressed out that the head of our school does not know Neu!” she says. Portlandia feels the pain of having accumulated such nuanced and far-reaching taste in music, and the frustration over not knowing what to do with it.

A sign of how much more comfortable we’ve all become with the blurring between the commercial and the noncommercial in our media culture is that prior to the start of this season, IFC released four Portlandia “webisodes” which could more accurately be described as product integrations for Subaru. All of them featured Armisen and Brownstein as Garrison Keiller fans tailgating a Prairie Home Companion show. The couple’s platinum hair marked them as occupying the upper reaches of the Gen-X/Baby-Boomer boundary. In one, Brownstein’s character refers to the music of the Old Crow Medicine Show as “hardcore soothing.” In a world of branded entertainment, where the distinction between commercial and noncommercial content is all but obliterated, why not treat “hardcore” as an empty signifier, apropos to Americana revivalists, or maybe just a good cup of tea?

Portlandia itself serves as a good, therapeutic cup of “hardcore soothing” for its IFC audience. Since the show began, its sights have been bound by generational tastes more than geography—satirizing utopian dreams, not a specific, supposed utopia. But if dreams aren’t alive and utopias don’t exist, the feelings and convictions that drive them can be very real, and Portlandia brings these feelings and convictions to the fore. It then becomes the job of the audience to ask, what next? Therapy, after all, isn’t just about making you feel comfortable—there are good, even legal, drugs for that. It’s about looking back, reconnecting with how you once felt, and trying to understand what got you where you are now.

Perhaps we can’t expect Portlandia to be too strident as it satirizes; it can’t push so hard it alienates its own audience. It has to constantly toe the line, to gently satirize its slacker-something audience, pushing them outside their comfort zone—right up to the point of yelling their safe word, like Armisen’s character Nina with her boyfriend Lance, “Cacao!”

Ethan Thompson is the co-editor of How to Watch Television. You can follow him @swigzine. 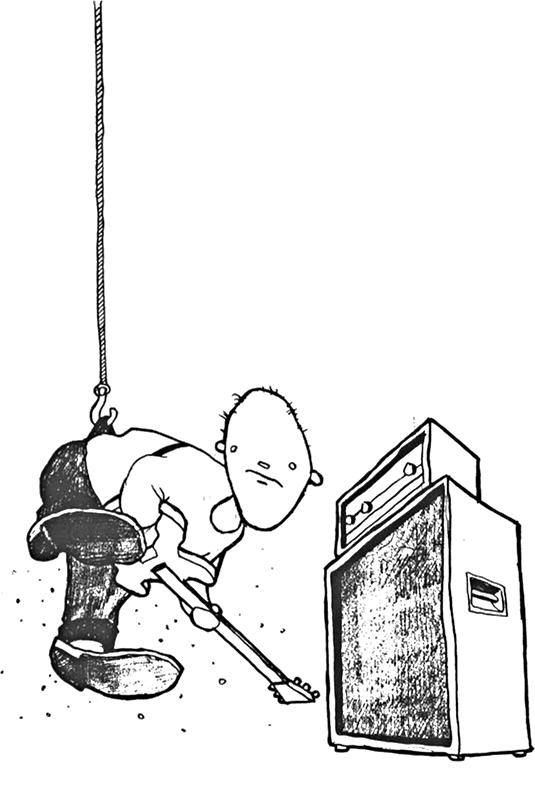 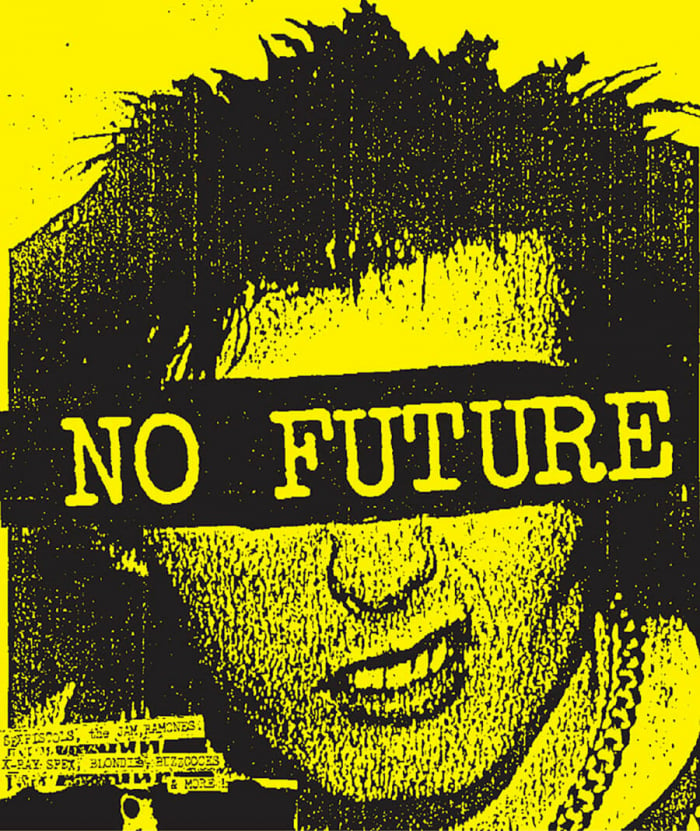