Imagine the plight of the values voter this Christmastime. Hard-earned cash in hand, he sets out one Saturday to tithe at the altar of the free market, a list of relatives and corresponding possible gifts shoved in the front pocket of his Carhartt jacket. Some new shoes for his varsity-track daughter, maybe. A gleaming cookware set for his wife. As his Dodge barrels down the interstate toward the mall, he smiles with satisfaction at all the money he’s about to spend supporting the economy of the greatest country in the world.

But something is rotten in the state of American capitalism. Halfway to the plaza, he remembers that he can’t keep supplying his daughter with her favorite Nikes now that the company has gone and put Colin Kaepernick in its ads. He remembers Target’s inclusive bathroom-usage policy and strikes it off the list for his wife’s frying pans. The more he thinks, the longer the list of companies who have bowed to SJWs in the last few years grows. He wonders if he might have even missed some headlines on Breitbart or Fox News. It’s hard to keep up these days. What to do?

He could start by downloading 2ndVote, an app and attendant website that touts itself as “the conservative movement’s corporate watchdog.” (Your “1stVote” is the one you cast at a convenient polling place that your gerrymandered Republican congressman made sure stayed open late). The company, which a spokesperson told me has about 360,000 subscribers across various platforms, is the only centralized place where people who share its values can go for retail advice. Conscious consumerism has long been more the domain of the left than the right, so its overall infrastructure is a bit anemic. This site, though, is surprisingly robust.

Something is rotten in the state of American capitalism.

Its rating system is based on companies’ public statements, internal policies, and donations on a set of seven issues: guns, environmentalism (“stewardship” is good, cap-and-trade is “extreme”), marriage equality, abortion, education (points for school choice but not for Common Core), immigration, and religious liberty. 2ndVote focuses on corporate dollars spent because, the same spokesperson told me, “corporations are only able to take positions on the issues or fund activist organizations because of the dollars that came from consumers.”

Each company earns a numerical score for its behavior. One is very bad, a punishment for direct donation or support for liberal groups. Five is very good, rewarding the same kind of financial support for conservative issues. Bass Pro Shops gets a five for sponsoring the NRA’s museum; Levi-Strauss takes a one for supporting the Paris Agreement, the ACLU, and a laundry list of other offenders. The twos and fours indicate indirect support, like donating to a United Way chapter that funds Planned Parenthood (this is more common than you think, as 2ndVote is eager to expose). A rating of three is neutral—“Either a company has no record of supporting or not supporting any issue, or the company has given equally between liberal and conservative groups.” These three-rated companies carry most of the site’s weight, and if 2ndVote had a higher bar for baseline acceptability, it wouldn’t have much to recommend. Maintaining neutrality amidst moral upheaval, much to Dante’s chagrin, is here not only fine but praiseworthy. No news is better than liberal news.

For readers learning that their favorite brands are verboten, the site’s alternatives are, to put it lightly, not equivalent. Ditching Lyft for its commitment to LGBTQ rights? Give famed on-demand ride-sharing services Budget or Payless Car Rental a ring. Protesting Apple’s removal of a pro-life app from the App Store? This one’s almost heartbreaking: head to RadioShack. Don’t even bother trying to find a conscionable credit card; the highest-rated one is Visa, with a measly two.

It’s there, in the doldrums of frustrated bigotry, that an unintended narrative emerges from between the grousing lines of 2ndVote. Once you venture below the three ratings, the site is just a list of nearly every major corporation in America. 2ndVote is meant as a manual for conservative shopping, but its off-label use is just as handy: an object lesson in how to profit off of social struggle, and an unwitting depiction of just how popular doing so has become. Not that they deserve any sympathy for their awful views, but social conservatives are right to whine that they have nowhere to go: almost no one wants their money.

This monolithic front of corporate social justice values is a newer development than the site decrying it. Dr. David L. Black founded 2ndVote in 2013, when he allegedly discovered that March of Dimes donations “were being funneled” to Planned Parenthood. (March of Dimes later clarified that five of their chapters had awarded grants to Planned Parenthood, “exclusively for prenatal education.”) But his site has hit its stride under the Trump regime, railing against the canny corporations racing to turn themselves into #resistance catnip for throngs of pink-eared beanie-wearers. A sense of exhaustion and betrayal permeates 2ndVote’s pages as it bitterly details, for instance, Starbucks’ “full-tilt embracement [sic] of the left’s agenda” or Best Buy being “a direct advocate for liberal values” (emphasis theirs). The morals are bad, but the take is in essence right. These brands may now be hiring or promoting more diverse workers—which, let’s be clear, should have been happening in the first place—but it isn’t because their boards care about righting injustice. If they did, they’d have taken action when it carried greater risk, or they would support actually bold changes, like Medicare for All or abolishing cash bail. No, they do it because it’s safe, and they know it will compel liberals to buy their stuff.

2ndVote is meant as a manual for conservative shopping, but its off-label use is just as handy: an object lesson in how to profit off of social struggle.

This is not to say that we shouldn’t be screaming and shaming corporations into making amends for their prejudice and pillaging. Representation in media and business truly matters; without it, white chains of command will continue to approve shockingly racist products while the algorithms engineering our futures reflect their makers’ near-uniform demographics. And for people who have spent centuries being terrorized by the ruling class, getting some validation from powerful players can be tremendously relieving. Normally advertisers have to create a problem—bad skin, dingy car—to present themselves as the solution. It took them a surprisingly long time to see oppression as a free opportunity (although their own discriminatory hiring practices certainly helped make it worth cashing in on).

But without reading the opposition sulkily decry corporate America’s united front of wokeness, it’s easy to miss just how lucrative these positions have become, and how ultimately unthreatening they are to the status quo. These companies are supposed to be in competition with each other; if they are all agreeing on something, it means the thing in question is good for everyone’s bottom line. No wonder, then, that many of the offenses that dock a 2ndVote rating are donations to liberal pro-business think tanks and advocacy groups like the National Urban League or Ceres, which aim to clean up the fallout from capitalism’s worst excesses in order to keep it chugging along, just more impactfully. Take Coca-Cola, which has such a standout record on corporate social values that it nets a dismal one on 2ndVote. Unmentioned there because social conservatives don’t care, but also omitted in liberal shopping guides and most mainstream press coverage, are the company’s sometimes violent suppression of union organizing and its exploitation of public water sources. 2ndVote’s obsession with public statements is a reminder that both liberals and conservatives often pay more attention to shiny objects designed to distract than the fundamental inequalities that huge corporations both exploit and generate.

Advertising industry research released last year supports this strategy of surface-level gestures. It turns out that while just over half of self-identified conservatives want companies to take a stand on social issues, more than three-quarters of liberals say they do. Unlike conservatives, simply participating in capitalism holds no meaning for them; they need their dollars to say something. But the real incentive for corporate wokeness is contained in another data point: liberals are almost twice as likely to view this grandstanding as authentic rather than opportunistic. So even if a company alienates some of its conservative customers by taking a public stance, the ones it retains or adds bring a devotion that outweighs the cost of these tepid boycotts. Maybe that’s why liberals get so angry when an attempt at profiting off righteous anger flops—when the mask slips, they’re left to stare back at their own need for consumption to be revolutionary. Nike is no less guilty than Pepsi of co-opting protest for profit. They were just better at selling it.

It’s tempting to regard 2ndVote as little more than evidence for that old Sanskrit proverb about the enemy of your enemy—if the opponents of basic human dignity loathe a brand, why not support it? We have to buy new shoes eventually, might as well do it somewhere that at least pretends to care. But the site’s weird mirror universe is really a warning about staying vigilant, not just angry: we’re never going to buy our way out of oppression, or onto a new planet to replace the one all these companies are destroying. Capital will continue pouring itself into whatever mold market research indicates the majority of consumers want, and right now, the mold is a raised fist. It’ll be nice while it lasts, but it’s far from a solution.

Zoë Beery is a writer and audio producer in Brooklyn. 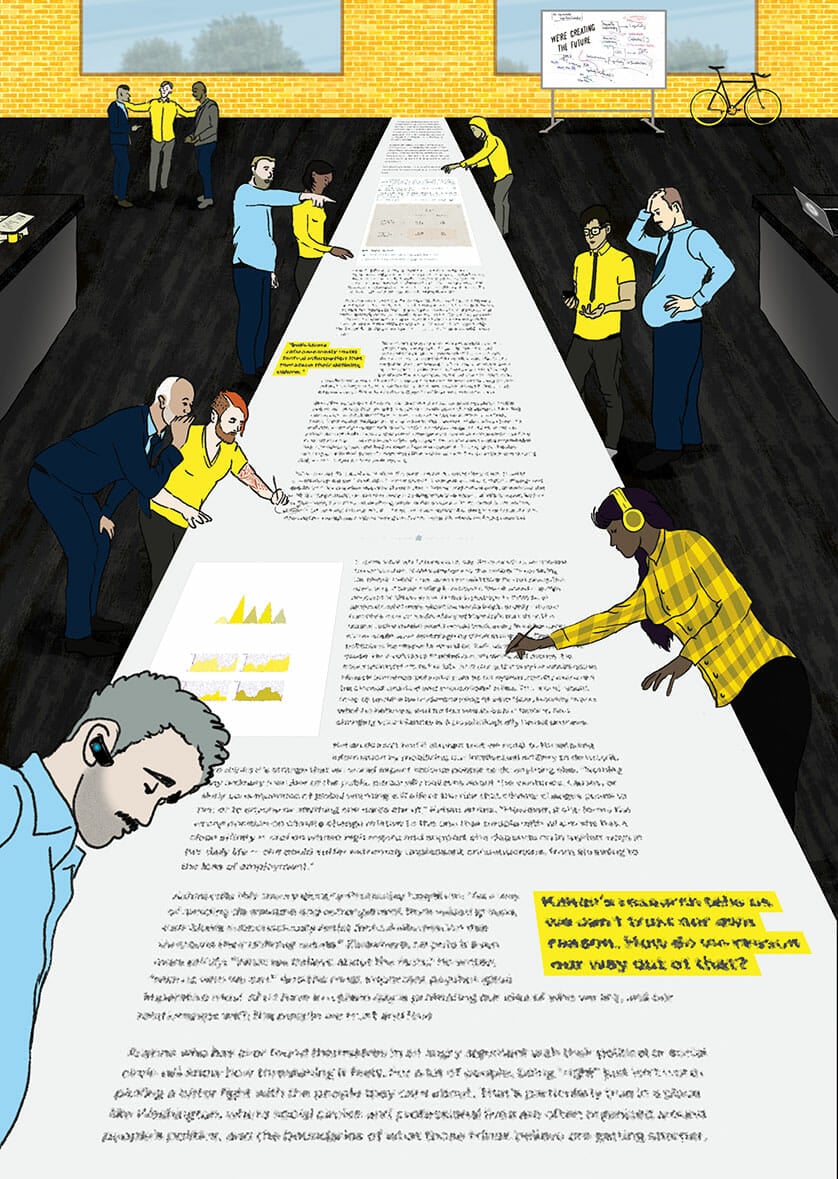 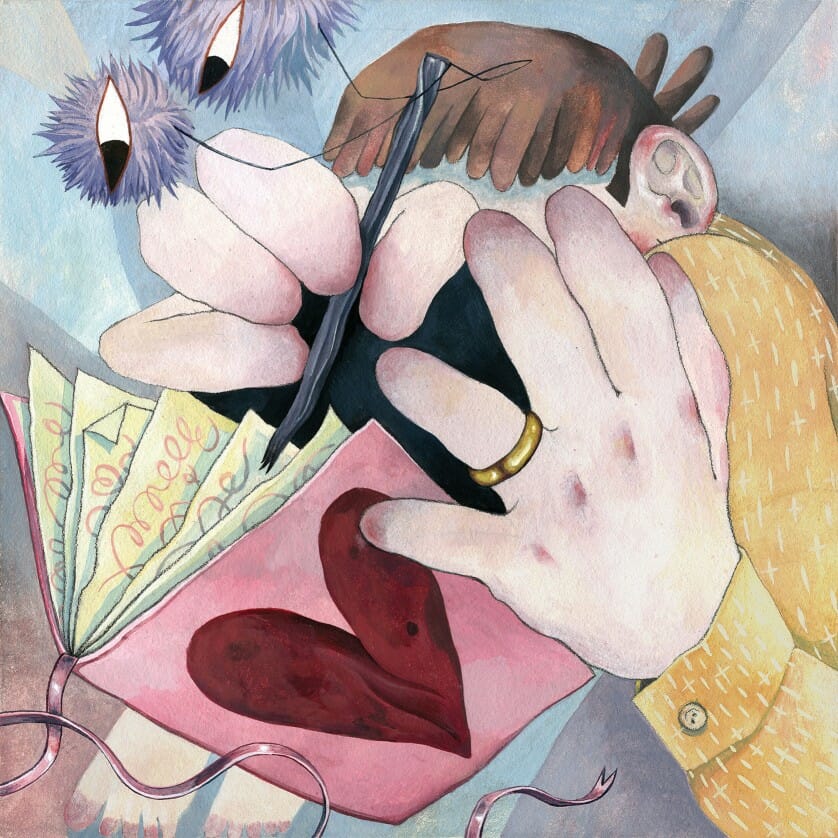 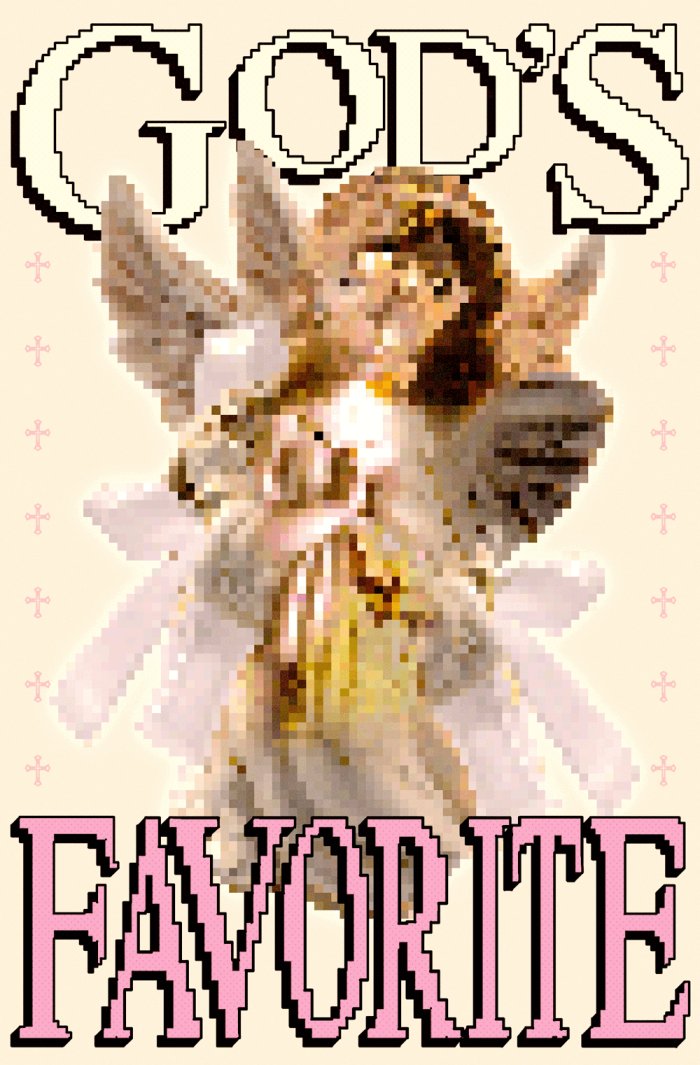