Some time in April 2015, Jared Leto sent someone to throw a dead pig on a table during the rehearsals for Suicide Squad. Those who were present at the time recount their shock and fear beholding the scene, their worry that they might be working with someone who was genuinely crazy. This is bullshit. It’s marketing patter, nothing more: their immediate reaction to having a dead pig plonked down in front of them was almost certainly exactly what yours or mine would be: an immediate, wretched boredom.

This was the first in a series of increasingly desperate pranks Jared Leto would go on to perpetrate on the film’s cast and crew—mailing them used condoms and anal beads, presenting them with dead rats and live snakes, and never once breaking character, on or off the set. In a film that takes pains to remind everyone at every stage how twisted and fucked up it is, Leto was playing the most twisted and fucked-up figure possible: the Joker, a comic-book caricature that, thanks mostly to Heath Ledger, has come to function as a grand symbol of anarchic, nihilist evil. The Joker is the laugh radiating out the heart of the black hole—the dianoetic laugh that gorges itself on all the misery of existence. The pure evil of this supervillain who wants nothing more than to watch the world burn is dedicated to what Samuel Beckett called the “saluting of the highest joke” and registers its force with a cackle of full diabolical evil.

Our society is obsessed with diabolical evil—in any big-budget film, Suicide Squad included, the villain’s plan can never be anything less that the willful extermination of humanity. And diabolical evil might exist. But it’s as if all of Jared Leto’s stupid and boring antics were actually performing a devastating critique of the film he was working on. Unwittingly (for when can it ever be said that Jared Leto has possessed genuine wit?), he’s shown us that, however twisted and fucked up we imagine diabolical evil to be, its representation is only ever deeply annoying.

While preparing for his role, Leto claims to have read widely on shamanism, sat through Alejandro Jodorowsky’s oeuvre, and spent time imposing himself on psychiatric clinicians and their patients. He brought the whole ponderous weight of method acting—something designed to help mediocre, merely human actors over-identify with their mediocre, merely human subjects—to bear on the challenge of playing a scary clown. He sunk deep into the foundational gloom of his psyche. And the result? Onscreen, a man with green hair and the word ‘Damaged’ tattooed across his forehead extends a trembling hand. (Because crazy people tremble, right?) He laughs in little staccato bursts, because he’s playing a clown. He puffs his lips out a bit, because that’s what Heath Ledger did. He’s on screen for roughly three minutes. His performance is slightly better than the worst Joker imitations on YouTube. It’s annoying to watch. That’s all.

Our society is obsessed with diabolical evil—in any big-budget film, Suicide Squad included, the villain’s plan can never be anything less that the willful extermination of humanity.

There’s no point saying that Suicide Squad is a terrible film; everyone already knows that Suicide Squad is a terrible film. For those of us who don’t obsess over the source material, the characters are all pointless and inexplicable. Why is Boomerang Bogan Bill (Jai Courtney) a supervillain? Why are we watching a sexy lapsed Freudian whose only superpower seems to be her incredible ability to say “that was fun” when something bad happens? How could so much money have been poured into something so stupid?

The basic schema of Suicide Squad is that everyone is a villain—our twisted-and-fucked-up heroes, the brutal government agencies that dispatch them, the tacked-on pre-Colombian eschaton-immanentizers, everyone. It’s a bad film because it encourages us to root for the baddies without realizing that this is what everyone does in superhero films anyway. It’s an especially bad film because it does so by trying to make the other baddies even worse. Will Smith’s assassin loves his daughter, Margot Robbie’s Harley Quinn is loyal to her friends, but the hyperbolic villains just want everything dead. No wonder reviewers hated this film; its central message is something that’s already been relentlessly imposed on them for months now. Suicide Squad tells you to support the lesser evil. Suicide Squad is the Hillary Clinton campaign.

It seems hard to imagine that a lesser evil might ever actually translate into something good, which might be why this year more people than ever seem prepared to refuse to play by its stupid calculus. In its filmic or its political form, the argument is always deeply unsatisfying. We could note how the lesser evil is always measured against the absolute worst that could possibly happen—nuclear war, the end of the world—while the act of refusing to settle for it is so rarely measured against all the actual wrongs that really do take place. These things are tolerable, and they’ll never end. It’s a cop-out, a refusal to ever think through what evil actually is.

The dominant tradition in the philosophy of evil stems from the Neoplatonist theodicean tradition (while going all the way back to Anaximander)—evil is defined negatively, as the absence or deformation of the good. Goodness is whole, complete, and universal, while evil is identified with finitude and lack: the evil of disease is a lack of health, the evil of crime is a lack of order. There’s only one way to be good, but a million different ways you can be twisted and fucked up. You can see this in the grand nerd mythologies of Kaballah and Middle Earth—in Tolkien’s world the universe is a song, and evil only spirals into existence when a note of disharmony is added to its chorus. But it’s particularly evident in politics: yes, Hillary Clinton spread fire and death over the Middle East; yes, she represents the worst excesses of financial vampirism; but she’s a human being, she has her flaws.

But there’s a counter-tradition, far gloomier and, arguably, far more useful. It has its roots in the Kantian notion of radical evil, an evil that’s ingrained and fundamental to existence. Kant doesn’t have humans falling into evil, but rising up from it, unsteadily and always in peril. Later thinkers teased out this notion further. In Adorno, evil is located precisely in the universality that the Neoplatonists called the good—the indifferent whole that stamps out all non-identity and flattens everything in its wake. Life under capitalism is the bad life, and every part of it—bad films, bad sex, tedious paperwork, the crushing drudgery of every pointless chore—partakes of that evil. Derrida posits something similar in his reading of Levinas. “The avowal of violence,” he writes in Writing and Difference, “is the least possible violence, the only way to repress the worst violence, the violence of the primitive and pre-logical silence, of an unimaginable night which would not even be the opposite of day.”

This is why lesser-of-two-evils arguments are so unconvincing: there’s only one evil, it suffuses everything we see.

This is why lesser-of-two-evils arguments are so unconvincing: there’s only one evil, it suffuses everything we see, and while one might do less harm than the other, each of its warring parts is still fundamentally the same thing. Donald Trump’s frenzied populism couldn’t exist without the suffocating liberal condescension of a Hillary Clinton; nobody would ever vote for Clinton if it weren’t for the looming threat of a Trump.

As it happens, the avatar of this perverse dialectic is the executive producer of Suicide Squad, Steven Mnuchin, a former investment banker who now captains Trump’s fundraising efforts. Mnuchin, scion of a Goldman Sachs fortune, has an impressive resume as a financial-industry bottom feeder, pocketing the proceeds of his mother’s account with Bernie Madoff’s notorious Ponzi fund just prior to its collapse, and exploiting the 2008 financial crisis to transform the teetering California mortgage lender OneWest into a foreclosure mill—victimizing predominately nonwhite owners of distressed homes and clearing a cool $3 billion in federally subsidized profits between 2009 and 2014. He also, naturally enough, was a donor to Hillary Clinton’s senate campaigns—as was Trump himself. Who better, in other words, to market a cinematic fable about the virtual equivalency of evil, and to make the market’s own species of social violence seem blandly alluring?

For Kant, evil was inconceivable to reason. We could say that today, evil is inconceivable to representation. The evil that faces us is a vast totality, and we exist within it; a film can only show individual things, and a part can never fully represent the whole. This is why Jared Leto’s hammy demon-act fails so badly. A dead pig isn’t evil, but only tiresome; a deranged nihilist that carves a giggling trail of destruction through the world isn’t terrifying, but only annoying. The real monster is everywhere. But there’s one moment in Suicide Squad that does come close. For a brief moment, we see a flash of Harley Quinn’s fantasy, something that for some reason is supposed to make us like her: a dream of domestic bourgeois respectability, herself doing the washing while the Joker, in a nice normal suit and tie, kisses one of their children on the crown of his head before going off to work. Horror, sheer horror, the madness of it all. 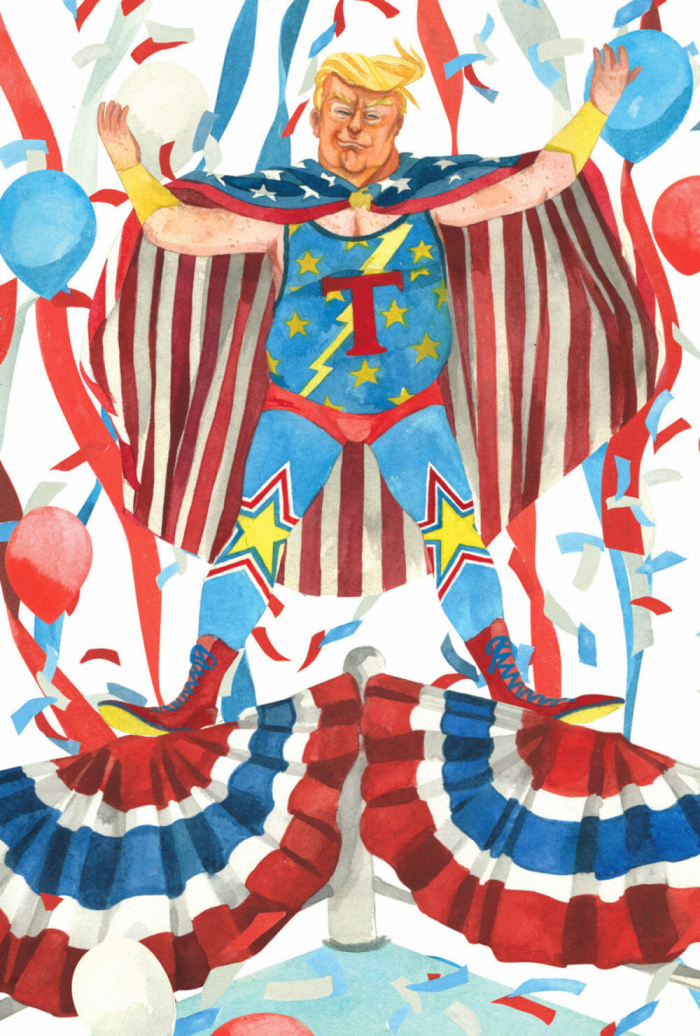 The Art of the Heel
Mike Edison
Salvos 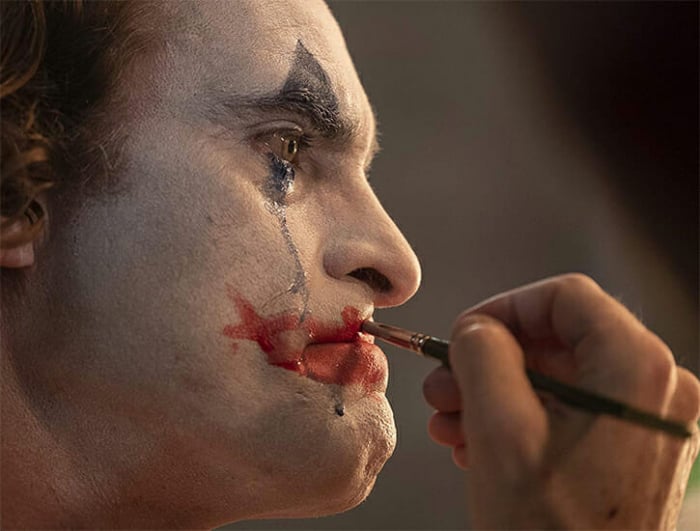