Pete Buttigieg—erstwhile corporate consultant, reluctant homosexual—is, as it stands, a bit of a loser. He’s never held statewide or national elected office, and his longshot bid for the presidency squandered nearly $100 million only for him to drop out and endorse Joe Biden before Super Tuesday, having won no primary outright. None of this, however, prevents Mayor Pete, a bizarre and unsettling documentary no one asked for, from proceeding as though its hardscrabble protagonist triumphed against all odds to win, if not the election, then the future.

Normally, a film about a homosexual with delusions of grandeur would be right up my alley, but Mayor Pete is so lifeless, so tepidly rote, that it more closely resembles a late-night infomercial for a weighted blanket with sleeves than the great campaign films it feebly mimics. Like a poisonous, Proustian madeleine, it ferries us back to one year before the Iowa caucuses—when Corona was just a beer and there remained a shred of hope in the air—to meet Pete, a no-name mayor from a no-name town. He’s serious about America and what it needs. He’s a well-educated “hometown boy”—not a yokel, but someone who went east to Harvard, then further east to wage war on behalf of his beloved country. Now he thinks he should run it. He considers himself “different” and “unorthodox” compared to the other Democrats crowding the field. The narrative arc Pete gives himself is simple; the individual details are only important insofar as they can be drawn out from or submerged in the pancake batter of his persona depending on which audience he’s addressing at a given moment.

Soon, we learn that Pete has a problem: he struggles to express all his policy knowledge and intellect in the stirring words and with the necessary emotion needed to rally enough votes for him to succeed in Iowa. This comes to a head when a police officer murders a black man in South Bend while Pete is off prepping for the first Democratic debate in Miami. Downtrodden that his big debut in the national spotlight may be delayed, Pete returns home for a town hall event to let everyone have a nice talk so he can sort it out. Yet the only concrete policy proposal comes from an audience member who demands racist police be removed from the streets. The event evinces Pete’s utter failure to connect with black voters, to address concerns about policing and safety, and to be concrete about what changes he will make. The director, Jesse Moss, highlights the fear and anger of the black residents of South Bend, but the film suggests that Pete is learning—he’s curious and wants to do better. Afterward, he gets misty-eyed before the television cameras. He’s “sick” of these things being talked about in “political terms.” He’s “motivated” by the anguish and anger of his constituents. He’s “angry,” too. Isn’t that enough?

Here is a man committed not to being apolitical, but to actively stifling progressive movements with a sparkling resume and vapid rhetorical flourishes.

As if a murdered man was only a speed bump, we’re quickly whisked back to what’s important: the campaign trail. But Pete isn’t done confronting the question of race. During a roundtable meeting with religious representatives, we hear from a Jewish man who wants to have better “conversations” across ideological and religious divides. The most passionate speaker at the table is a black man who asks Pete why a forty-fifth white man should be elected president. (None of the attendees are named; only Pete matters.) In response to questions like this, the mayor often uses the right words—“systemic racism,” “racial injustice”—because he is conditioned to do so. These words drift unattached to any ethical or policy commitments; they’re merely parts of an answer to a question he’s prepped for. Indeed, at no point in the documentary is a single, solitary policy proposal uttered by Pete or anyone on his campaign. Instead, through various scenes, Moss shows the concerted effort to burnish the Mayor Pete brand. We see definitely-not-running-a-Twitter-account-as-a-Nigerian-man Lis Smith endlessly workshop Pete’s “tin-man” answers to what are essentially straightforward questions. Pete wants us to have “tough conversations,” make sure “voices are heard,” but reminds us that this is only “the beginning of the conversation.”

Pete has other problems, too: he wishes he wasn’t gay. Or so the film wants the viewer to think. The first time we learn of this is at a dinner thrown by the Victory Fund, a liberal non-profit meant to advance LGBTQ leaders and candidates. At the lectern, Pete spins a gothic tale of the “war” inside him—how, as a young man, he’d wished there was a “pill to make [him] straight” and how he’d wanted to “cut” the gay part out of himself out with a knife. How these feelings came about, where they’re rooted, who made him feel this way, or why he did so, aren’t elucidated. But “thank god there was no pill; thank god there was no knife,” he concludes, without appearing to offer any indication of how happy he is to be relieved of this burden, or how happy his husband Chasten makes him.

After the speech, Chasten wonders if these gruesome visions of self-harm are meant to imply Pete struggled with suicidal thoughts. Pete demurs. He grunts “yeah” a few times, as if to suggest his husband should shut the hell up. Later, on the night of the Iowa caucuses and before Pete preemptively declares victory ahead of the final count, Chasten wonders aloud to Pete why all the other candidates have their spouses on stage and he won’t be. Pete disregards the question multiple times, and, in the end, Chasten is brought on stage at the end for a grisly peck on the lips. If Chasten were a woman, critics would decry Pete’s flippant disregard and consistent diminishing of his spouse, who is shuttled around as a rainbow-clad prop.

But what strikes me most is how out of place and time Pete’s sense of homophobia feels. He graduated college in the 2000s and publicly came out ten days before Obergefell v. Hodges made same-sex marriage legal nationally. Yet the homophobia Pete describes hails from the 1950s and seems aimed directly at the voters born in that era or well-meaning suburban liberals, the types of people who vote in Democratic primaries and who would like to pat themselves on the back for overcoming their prejudice. These scenes are particularly galling to watch because the examples of actually existing homophobia that Pete experiences are played for laughs: a Trumpian crank in a crowd in Iowa is shouted down by other attendees. Another group of men, one of whom is dressed as Jesus at the cross, were, I suspect, at the beginning stages of their own gay exhibitionist BDSM fantasy. Chasten, the only person in the film with any feelings for other human beings that aren’t telegraphed for political gain, asks Pete about his own minority status, the fact that the AIDS crisis wasn’t that long ago and that queer life remains under threat in some parts of the world. Pete answers, “I think people are trying to figure out what to do with [his gayness]” and that Chasten had to deal “with more bullshit” than Pete. The man we have had thrown at us for the last hour as a real intellectual and thinker cannot, in this moment of staged intimacy, muster more than deflection.

Pete fabricates this intense internal drama to obscure his patently austerity-driven, stay-the-course, circa 2004 Democratic nominee politics. The timing of his struggles with—and eventual, though begrudging, acceptance of—his sexuality read as all too convenient for his career: he came out in 2015 and married one year before starting his campaign. In the film, he positions his homosexuality as a type of “alienation” granting him “outsider” status in an attempt to draw connections across difference. Yet in practice, his gayness functions as a shield from criticisms of his status as a white man with an Ivy League degree. When asked about his whiteness, he plays his identity politics card: but, I’m gay! This reads less like drawing connections across difference and more like a cold, calculated deflection. Pete leverages his experience of “struggle” in his pursuit of the Pennsylvania Avenue address. His gruesome tale of a “war” inside him is no match for the war he’d prefer to be waging—to deepen the neoliberal politics of the Democratic Party and lean into the death spiral of American capitalism.

Mayor Pete lays the groundwork for an extended cinematic universe of the Buttigieg clan.

Here is a man committed not to being apolitical, but to actively stifling progressive movements with a sparkling resume and vapid rhetorical flourishes. His is a political style built on middlebrow aesthetics (I haven’t seen so much J. Crew since I left college), liberal niceties, calm, and a slight Obama-esque inflection. Pete’s brand of anti-politics—which ignores struggle as a site of political change—is presented as the natural heir to the feel-good neoliberalism of the Obama era. In the film, he claims that his project isn’t “a great man” of history thing—at the outset of a ninety-six-minute documentary about how great and transformative a man he could be.

Regardless of whether you want it, Mayor Pete lays the groundwork for the chipmunk’s inevitable next presidential run (2024? 2028?) as well as for an extended cinematic universe of the Buttigieg clan. One expects that we will soon be treated to a limited reality series on Apple TV+ chronicling the struggles Chasten and Pete face as new parents scraping by in the beltway. Or perhaps a gently fictionalized Pete origin-story based on his tortuous memoir. But maybe we should prepare ourselves for worse: Michelle and Barack have their own production company. Why not Pete and Chasten? For now, Pete is biding his time as transportation secretary, plotting his next move. As he intones darkly at the end of the film, “time is on my side.” 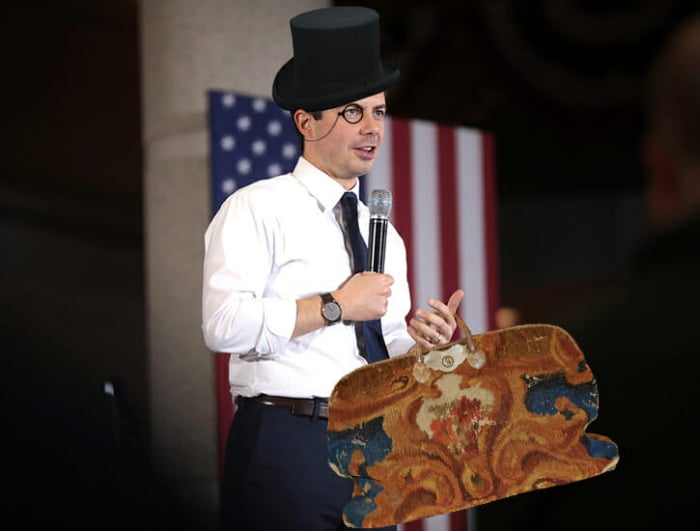 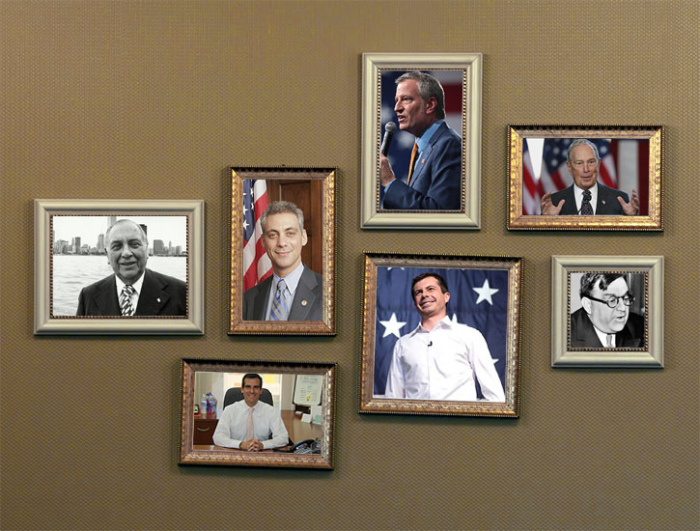