Strangely, the critics have decided that Iron Fist—the latest iteration of Marvel and Netflix’s ninja-punching mini-superhero franchise—is not very good. This is strange not because they’re wrong; it’s terrible, not so much a piece of entertainment as a hole that opened up under thirteen hours of my life. We’re thrown into something plotless and meandering, in which our profoundly annoying heroes are set against a bleary, undefined conspiracy called the Hand, without any reason or explanation. The dialogue is almost calculatedly dire—when characters aren’t describing exactly what they just did to each other, they’re offering vague bromides in lieu of conversation (“The longer I spend in New York,” the hero, Danny Rand, intones, “the more I realize the duality in life”). After the third hour of mathematically uninteresting martial-arts action everything started to lose definition; all those punches and chops were just empty movement, like the flickering of a film projector. It’s sheer gibberish; without anything of interest for the viewer to latch on to, the news that the Hand is in Rand is as meaningless as any other piece of nonsense verse. Watching the show is embarrassing. Hundreds of people worked so hard to bring this dream into being, they all took it very seriously and expect you to take it seriously too, and it’s awful. What a waste.

But it’s strange that the high court of TV criticism has decided that this show is bad, when in all these respects it’s exactly the same as every other offering Netflix and Marvel have ever put out. In two seasons of Daredevil, our hero spends twenty-six hours repeatedly punching ninjas and drug dealers, again for reasons that are never really explained. In Jessica Jones, it’s a mind-control zombie. In Luke Cage, it’s drug dealers. All in all, that’s sixty-five hours of desiccated martial arts imitation. With a conservative average of three million viewers for each show, a cumulative total of just over twenty-two thousand years have been spent watching people with superpowers talking like robots and punching ninjas.

So while these series are bad, they’re not unimportant. Netflix creates its plotlines and pacing by observing the aggregated metadata for all the other programmes on its site; it knows when people take toilet breaks in the less interesting sequences, it knows when they get bored and decide to go outside. This thing, Iron Fist, a dopey man with a doughball for a head wandering around and punching people, is what viewers want; for all the negative reviews it’s Netflix’s most binge-watched show to date. In some sense, it’s the deep ideological truth of our society. Stories about superheroes have, in the last decade or so, become inescapable; they’re our primary cultural substratum, our equivalent of Church dogma or mythic cosmogony. In the same way that the Homeric epics encoded the social and psychological structure of antique Greece, telling us through stories about gods and wars and monsters how the ancients imagined their world, Marvel comic-book narratives encode the word of postmodernity. When the Iron Fist punches a ninja for the fiftieth time, he’s not fighting some fictional ancient order, but hammering through the contradictions of capitalism.

The Iron Fist is not fighting some fictional ancient order, but hammering through the contradictions of capitalism.

The chief complaint surrounding Iron Fist is that the main character has been miscast. The story is about a young man called Danny Rand, heir to a vast industrial conglomerate, whose parents die in a plane crash over the Himalayas and is taken in by an order of interdimensional Buddhist monks; we see our hero return to New York a kung fu master, trying to regain control of his family’s company from callous executives and a mystical order that has the power to conquer death. The argument—and it’s not an unreasonable one—is that the main character should have been played by an East Asian actor, that it was insulting to make him white. It could have been a genuine homage to the great old kung fu movies it rips off, if it weren’t so desperate to appropriate them. Instead, we get the dull spectacle of yet another bearded white boy savior practicing his tai chi, droning on about his spiritual energies, and defeating hundreds of actual East Asians at martial arts. Asian culture is just another playground for whiteness, and the rules of the game demand that whiteness always win.

Fine. But there’s more to dismantle in what the show is actually saying. Danny Rand comes back from the mysterious Orient to find that an ancient evil has burrowed deep into the financial district of lower Manhattan. Some strange power is at work in his father’s old boardroom, something sinister moves in its multitudes through the night. This power is behind every kind of vice and corruption; in a few hundred years it has spread its tentacles across the world, carried along shipping lanes and congealing in the cities; deathless and inhuman, it ruthlessly expands according to a logic directly inimical to human life. This should be—and is—a clear if unsubtle metaphor for late capitalism. Instead, in Iron Fist, that sinister influence is immigrant communities. If we’re serious about critiquing racism in mass culture, we should probably start here.

The show takes place in a kind of inverse image of the real world, a fantastic plane adjacent but opposite to the one we live in, and the Iron Fist guards the pass. The villains are something called the Hand, evil drug-dealing ninjas without any defined mission beyond their own evil, who under the leadership of a frail-looking Chinese woman called Madame Gao have swarmed into Western cities and are on the brink of taking them over. In this backward-world, it’s Chinese people forcing opiates on defenceless whites; it’s innocent multibillionaire businessmen who are being crushed and exploited by migrants. At one point, our hero tells Gao to leave New York and go back to where she came from—and we’re supposed to be on his side. The real evil in lower Manhattan is autochthonous, spiralling out of the ground into vast towers from which it rules the world; the real evil in New York is the substance of everyday life. In Iron Fist, it’s the product of invading Chinese, and only a true-blue businessman can stop them.

This dissonance isn’t something unique to Iron Fist; it’s just a particularly advanced example. We’re in an age of “dark” and “gritty” comic book narratives—but what this really means is that the structure of their moral fable is in collapse, and the crisis lies in their inability to properly represent evil. The baddies in Iron Fist have no motivation whatsoever; they’re just the ill-defined other of a capitalist body that has so thoroughly conquered the globe that it no longer knows how its enemies might even think. The Hand—a secret order in touch with forces from beyond our world—is in control of one of the world’s biggest companies, and what does it do with it? It uses it to sell heroin. No wonder the story’s unsatisfying. The grand, cosmic, supernatural enemy is identified with all the rejectamenta of modern society, its unbearable remainders, the residue of its lies. Petty street crime, drugs, migrancy, the vague sense of ethnic threat.

The grand, cosmic, supernatural enemy is identified with all the rejectamenta of modern society.

This isn’t a failure of the writerly imagination; it’s a fundamental inability to imagine at all. Comic book fables can’t properly represent evil, because while evil does exist, it consists in precisely their own mode of representation and their own narrative conventions: the hero who always defends the status quo, the man who, like the fascistic sovereign in Carl Schmitt’s political theology, upholds the structure of law in his ability to step outside of it; the villains who infiltrate society with their lusts and their schemes, always on the outside of the established order.

Marvel Studios’ own forceful infiltration of the grand cultural landscape began in earnest with another ferrous Übermensch, 2008’s Iron Man; ever since then disastrous reactionary politics have grown, a demented tumour in the advanced capitalist societies. A surging far right wants to defend the liberal order by fascist means; they dream up exceptional individuals, great crimefighters like Trump or Duterte who will restore the cosmic order by applying state violence to drug users, migrants, minorities, riffraff, the weakest in society. And all the while these same stories are blared at us from the million faces of a vast culture-industry complex—and we sit and watch them for twenty thousand years, complaining that the great fascist opera of our time should have featured more Asian actors. 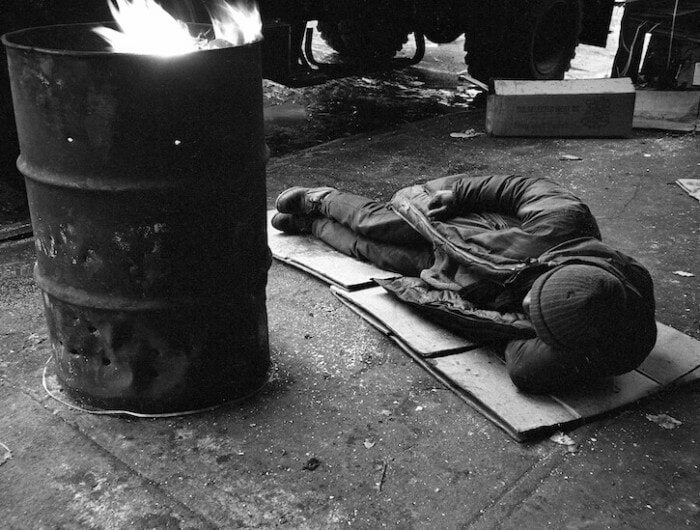 Out in the Street
Lisa Hsiao Chen
Word Factory