Though we, the people of this disintegrating empire, are simultaneously beset with unprecedented wildfires, unprecedented flooding, and reaccelerating mass death, that’s certainly no reason to go without, for the second year in a row, that dusty, drug-addled bacchanalia of steampunking tech-bandits known as Burning Man. Indeed, though the official festival has—wisely—been cancelled, that has not stopped thousands from descending on the Black Rock Desert anyway to partake in the incomprehensible pleasures of listening to Diplo while coming up on LSD of questionable provenance—though the performance by Diplo is only a rumor, and even if he does arrive, it’s doubtful he’ll do so on a Popeyes-branded private jet, as he did in 2019. Things are considerably scaled back at this unofficial festival. Nevertheless, assures one Wisconsin man, age thirty-eight, who flew semi-private, there are still lots of “highly intelligent successful friends from the Bay Area” in attendance. “Out here, this is the real America, the freedom.”

The Revolution Will Be Served with Extra Lime Cilantro Jalapeño Vinaigrette, Sub Feta for Goat Cheese, Light on the Shredded Cabbage, Please?

As for the ramping up of mass death in the United States from Covid-19, taking place despite the wide availability of ivermectin—a drug used to treat parasites in animals, usually horses, and in no way effective against Covid-19, no matter what Joe Rogan, the former host of Fear Factor, thinks—the CEO of Sweetgreen, Jonathan Neman, has a solution! And vaccines and masks are decidedly not it. No, the real reason the pandemic endures—and, indeed, appears to be getting worse—has nothing to do with our degenerating social contract, aided and abetted by for-profit media organizations committed to lending entirely unwarranted credibility to batshit loons hocking sundry conspiracy theories. No, Covid-19 continues because many Americans are fat. “What if,” instead of instituting a national vaccine mandate, “we focused on the ROOT CAUSE and used this pandemic as a catalyst for creating a healthier future??” Neman asked in a LinkedIn post. “What if we made the food that is making us sick illegal? What if we taxed processed food and refined sugar to pay for the impact of the pandemic? What if we incentivized health?” What if, once a day, every American walked into Sweetgreen and ordered the Elote Bowl, back for a limited time only? Wouldn’t that be something?

Don’t Be a Jerk

Meanwhile, the U.S. Army, though they may have, depending on who you ask, spectacularly bungled the withdrawal from Afghanistan, has some advice to dispense—on soldiers’ dating lives. Specifically, the Army’s V Corps is now offering the workshop “Don’t Date a Jerk.” According to a press release, “The Army wants to make sure we’re putting training and value back into developing healthy relationships.” And by “healthy relationships,” the Army exclusively means of the interpersonal variety; ideally, relationships between nations should continue to be founded on belligerent self-interest and maintained in a manner that results in maximal suffering for both parties.

Last year, we reported on the happy nuptials of beefcake Kazakhstani bodybuilder-cum-influencer Yuri Tolochko and Margo, a sex doll. Regrettably, Mr. Tolochko is now estranged from his wife, who had to undergo “repairs” last Christmas, and has now fixated his insatiable desire on another inanimate object: an ashtray. They met at a club, and though the ashtray is older, Mr. Tolochko likes “things with history.” They’ve been dating for several months and Mr. Tolochko has grand plans to install an artificial vagina in the ashtray so that he can fuck it, as one does, especially when one appears to desire nothing more than virality on the content-trash stream.

Far across the pond in New Zealand, billionaire Peter Thiel, himself no doubt aware that capitalist civilization has now entered an era of terminal decline, has filed plans to erect an underground manse inspired by the hobbit houses in Lord of the Rings. It is there, on the pristine shores of Lake Wanaka, that Thiel will presumably ride out the apocalypse, emerging when it’s all over to salvage whatever shareholder value remains. As for the rest of us, well, whether we’re choking on toxic smoke or watching the waters rise on the subway platform, perhaps we’ll be lucky enough to be serenaded by a talented violinist on the way down—like the drivers trapped in traffic as they fled South Lake Tahoe ahead of the Caldor Fire earlier this week. 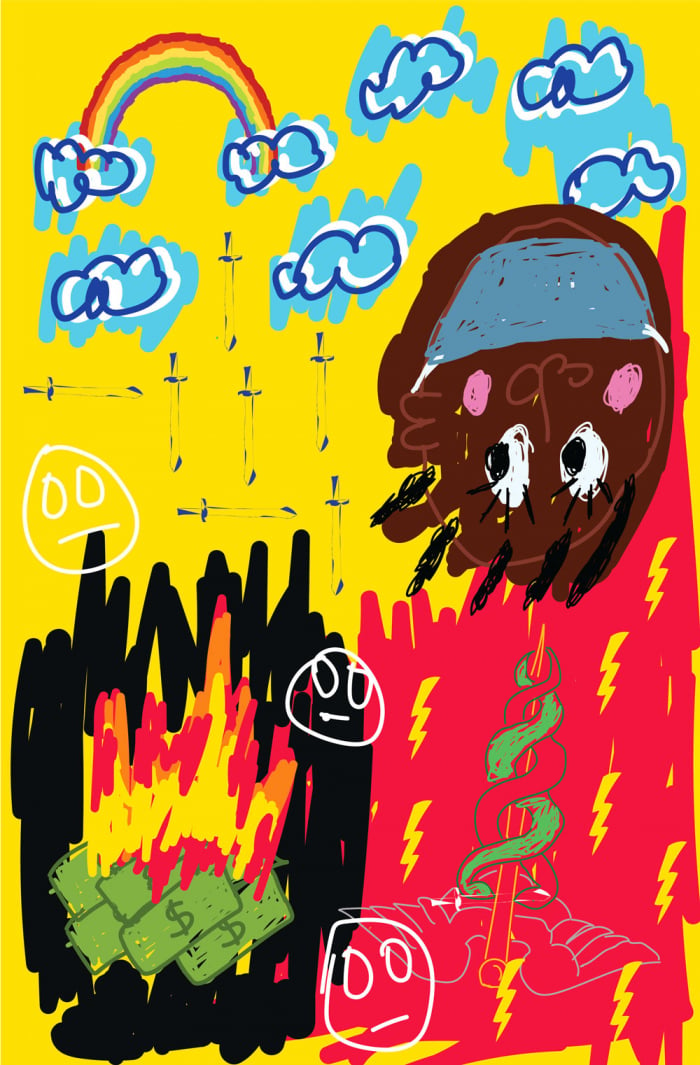