The revelations over the past nine months that the United States is engaging in various mass-surveillance programs that collect and store huge amounts of information about both Americans and foreigners has rightly invited frequent references to George Orwell’s Nineteen Eighty-Four.

Perhaps the most notable of these came from federal district-court judge Richard Leon, who had Big Brother on his mind when—in concluding that the government’s comprehensive collection of Americans’ call records over a seven-year period was likely unconstitutional—he labeled the program “almost Orwellian.” Indeed, these days one cannot help but recall the observation of the novel’s protagonist, Winston Smith, that in the society he knew, “Nothing was your own except the few cubic centimetres inside your skull.” 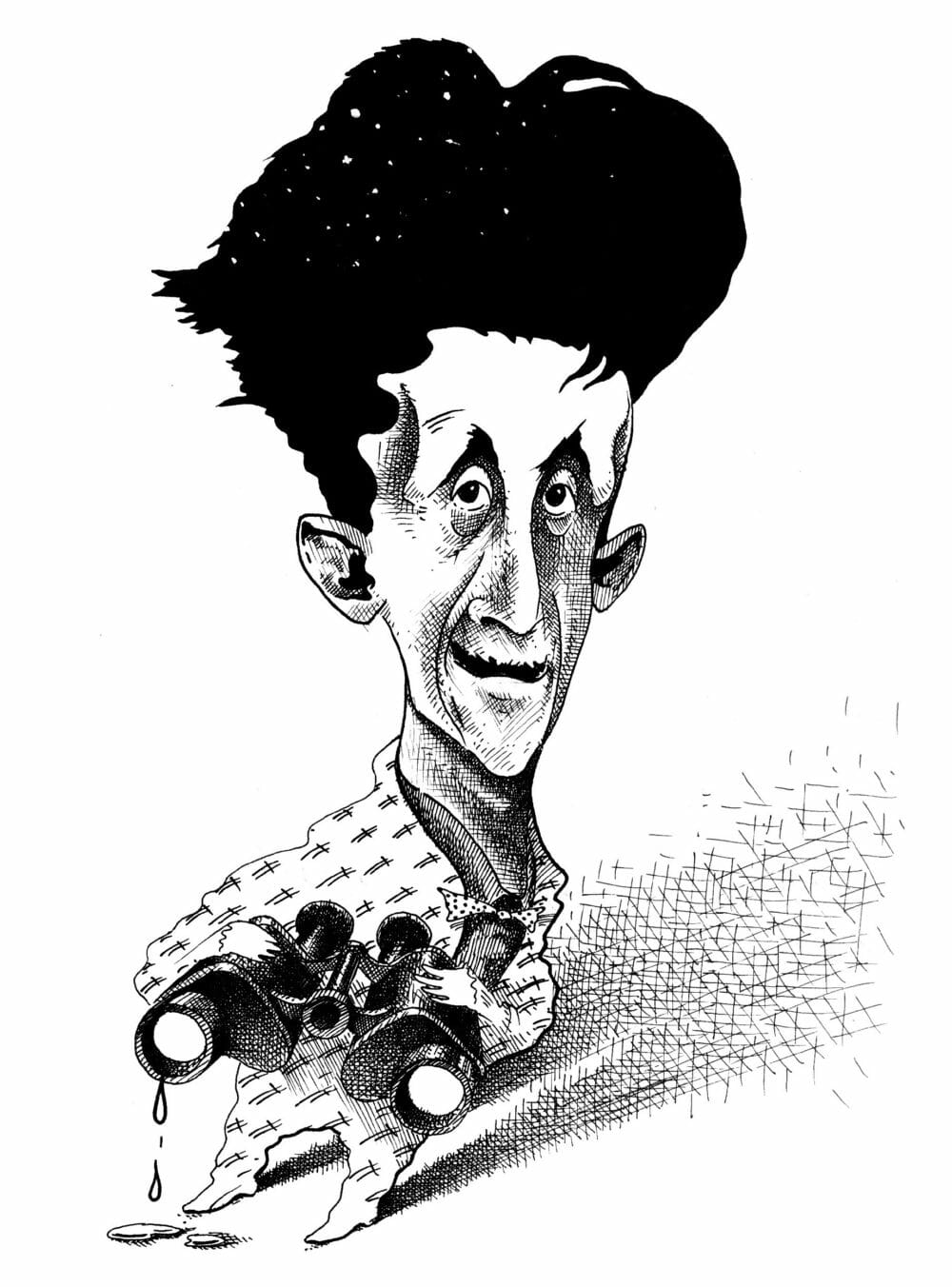 Judge Leon and others making similar allusions are not at all off the mark. But while Nineteen Eighty-Four is commonly taken as a comment on mass surveillance, its fundamental concern is not technological, but linguistic. For all that Orwell’s “telescreens” recalled Bentham’s panopticon, he trained his broader narrative on the state’s willful manipulation of language in the service of vast, secret power and control. After all, Big Brother’s most potent tool for policing society had little to do with controlling computers, and everything to do with controlling truth. This aspect of Orwell’s novel has been much less discussed during the contemporary debate about the NSA than its portrayal of the all-seeing Party, but it is no less trenchant.

In dreaming up the concept of “Newspeak”—a language intended to make “impossible” any “modes of thought” that are incompatible with state policy —Orwell gave fictional purchase to ideas he’d offered years earlier in his seminal essay, “Politics and the English Language.” There, he addressed the “special connection between politics and the debasement of language,” warning of the grave threat posed to society when “words and meaning have almost parted company.”

To Orwell, this threat was not merely that loose and imprecise writing fails to convey one’s real meaning. His more immediate fear was more fundamental: that reliance on vague, “ready-made phrases” would, over time, conceal one’s real meaning even from oneself. Orwell understood that when a population stops “hunting about” for words—when it instead regurgitates the limited vocabulary of those in power—it stops truly thinking. “The fight against bad English,” Orwell wrote, “is not frivolous and is not the exclusive concern of professional writers.” Far from it—it is “a necessary first step toward political regeneration.”

The government’s mass-surveillance apparatus, and the secret legal gymnastics that purportedly justify it, is a chilling expression of Orwell’s worst fears.

Take, for example, the government’s bulk collection of Americans’ phone records under Section 215 of the Patriot Act. (Or take, for that matter, “the Patriot Act.”) The statute authorizes the government to obtain “any tangible thing . . . relevant to an authorized investigation” concerning foreign intelligence or terrorism. Yet according to the Foreign Intelligence Surveillance Court’s breathtaking interpretation—which remained secret (and shielded from public scrutiny) until Edward Snowden came along—a record of every single phone call made on American telecommunications networks is “relevant” under Section 215.

The government has claimed that this is so because in order to find the small number of phone records it might be interested in later, it needs all of the records now. But that reading renders the word “relevant” effectively meaningless. Instead of serving as a limitation on the reach of the law, it places almost any conceivable “thing” within the government’s grasp.

In the words of the Privacy and Civil Liberties Oversight Board, which recently put forward an extensive legal analysis of the government’s theory, the interpretation means that relevance “becomes limited only by the government’s technological capacity to ingest information and sift through it efficiently.”

The NSA’s word games don’t stop there. The government has consistently argued that its mass call-tracking program is not “surveillance” because it doesn’t involve the monitoring of the contents of communications—even though mining a database of phone records can actually reveal a great deal more than listening in on our calls and reading our emails.

And when the government protests that it isn’t “collecting” information, it actually means that it hasn’t yet “tasked” it for “subsequent processing.” Rather—as we learned in the wake of Director of National Intelligence James Clapper’s false denial to Congress that the NSA “collected” data on millions of Americans—what the NSA is doing is merely “accumulation.” (Query whether America’s philatelists are now “accumulating” stamps.)

It seems that every other day, the public discovers a new addition to the NSA’s own special lexicon. We’ve been told that the collection of Americans’ emails, text and video chats, and photographs under the NSA’s PRISM program is “incidental”—even though intelligence officials who advocated for the law that authorizes it made clear that vacuuming up Americans’ communications was its most important purpose. And we recently learned that when the government assured the Supreme Court last year that it would give notice to criminal defendants against whom it intended to use evidence “derived” from certain NSA programs, it was relying on its own peculiar definition of “derived.” It just neglected to share it.

The distortion of words in secret to preserve hidden powers appears to be endemic to post–September 11 American governance. (And lest one chalk this up to “lawyers being lawyers,” there’s a vast distance between lawyers publicly debating the meaning of crucial terms to gain advantages for their clients, and the government devising new definitions behind closed doors.) During the Bush administration, government lawyers in the Office of Legal Counsel secretly redefined the meaning of “torture” to exclude all but the most horrific interrogation techniques. And under President Obama, in construing the government’s legal authority to use lethal force (such as drone strikes) against individuals it suspects of terrorism, the same office has adopted a “broadened” definition of international humanitarian law’s traditional “imminent threat” requirement. The government’s new definition divorces “imminence” from “the immediate future,” rendering an unfamiliar meaning closer to “potential” than to “impending.”

In his essay, Orwell observed that “political speech and writing are largely the defense of the indefensible,” and he condemned the use of words “designed to make lies sound truthful and murder respectable, and to give an appearance of solidity to pure wind.” It’s hard to escape the valence of that description to our contemporary politics.

These policies—mass surveillance, torture, and targeted killing—have systematically violated civil liberty, but the Newspeak-inspired approach to language that has facilitated them is a frontal assault on (to borrow another Orwell phrase) “intellectual liberty” as well.

What good are words—and the laws with which we write them—when the government saps them of their ordinary meanings? One great power of language in a democracy lies in its ability to set the terms of the government’s compact with the governed—to grant the state power only upon popular consent. But a government threatens its own legitimacy by relying on its own dictionary. Policies erected on corrupted language are inherently corrupt.

The basic genius of Orwell’s great essay is its recognition that language is an “instrument which we shape for our own purposes.” The government’s word games do this all too cynically, allowing it to secretly accumulate (or is it collect?) extraordinarily broad power. This bad-faith semantic dexterity threatens to remove critical thought from the province of the people, and to (as Orwell cautioned) allow the government to “think your thoughts for you.”

President Obama has insisted that United States government is not Big Brother. But it sure is acting like one—in more ways than the people making that accusation may even realize.

Brett Max Kaufman is a teaching fellow at New York University School of Law’s Technology Law & Policy Clinic, where he works on issues related to privacy, technology, and surveillance. He has written for The Guardian, Slate, The Atlantic, and the national security blog Just Security. Find him on Twitter at @brettmaxkaufman.

To pay wages for housework would reveal at the core of capitalism a fundamental reliance on the unpaid labor of women.

Keeping the Lights On

Utility workers have been hit hard by coronavirus.

On bids to reform blood donation policy for men who have sex with men.