Not that Cosmo deserves more grief. It’s the magazine equivalent of the Basic Bitch, an archetype of boring, conventional white femininity. Pity the popular girl who realized too late that all those high school losers would grow up to live in New York and become editors of the publications that now mock her. Who can blame a woman for trying? Cosmo is winning at capitalism, keeping sixty-four international editions in print while reprising its title as best-selling women’s magazine in America.

And Cosmo’s ethos of consumerism is as integral to the conventional, or Basic, American life as it was in 1886, when publisher Paul Schlicht wrote in the first issue of The Cosmopolitan that “There will be a department devoted exclusively to the concerns of women, with articles on fashions, on household decoration, on cooking, and the care and management of children, etc.”

Honestly, the magazine’s contemporary light feminism is supremely digestible, and if anything is going to get a casual, apolitical reader to consider reproductive rights, it’s this recent headline at Cosmopolitan.com: “Must-Read: Will Mississippi Become the First State With No Abortion Clinics at All?” Does it matter that on the same day, the homepage also offers insight into the secret life of single dudes? Not if putting politics alongside the fluff gets readers thinking more critically. In January, the site even ran a piece called “9 Lesbian Myths Debunked.”

What Cosmo gets right is that it’s so nice. Like its own ideal reader, it’s entirely unthreatening. Exactly what a socially acceptable woman is supposed to be. So what if Cosmo took a Women’s Studies class in college? She’s magnanimous enough to include LGBTQ folks, and sometimes people of color, in the magazine’s coverage, while still managing to maintain a sweet, chatty, appealing persona. That’s having it all—and it’s no longer only the provenance of straight women, either.

Autostraddle, the queer online equivalent of Cosmopolitan, bills itself as a site for “News, Entertainment, Opinion, Community and Girl-on-Girl Culture.” Launched in 2009 by writers Riese Bernard and Alexandra Vega, Autostraddle emerged from the Jezebel tradition to fill a queer, community-oriented void in online feminist media. Autostraddle’s “About” page makes its values explicit: Honesty, Community, Courage & Integrity, Laughter & Fun, Fun, Fun!, Art, and Inclusiveness. The website’s bold graphics and rainbow hues mark it as friendly, accessible, and young—all the things an American woman is supposed to be, but in this case, she happens to be queer.

Unlike Cosmo, the personification of this magazine isn’t a she, necessarily; Autostraddle also regularly features writing by and about trans*, intersex, genderqueer, and otherwise non-normatively identified people. It does have some really smart, challenging writing about race and the environment, and international politics. But by announcing itself as a place for “Girl-on-Girl,” rather than the more grown-up Woman-on-Woman, or the more inclusive (but admittedly awkward) Human-on-Human Culture, Autostraddle diminishes and infantilizes its politics, just as the most thoughtful of Basic Bitches are encouraged to do. Autostraddle self-describes as “the world’s most popular independently-owned lesbian website with over 800,000 unique visitors and 3 million views per month.” But, the site admits, “popularity doesn’t equal profit in this industry.”

Moreover, while Autostraddle regularly addresses more complex issues than does Cosmo, it adopts a similar tone of cloying niceness. Like many community-oriented websites, it hosts an open comment thread on Fridays. The pre-jump text on last week’s post reads, “It’s Friday which means it’s time for the Friday Open Thread! The article that is just like your journal but also someone else’s journal and also it talks back to you!” There’s something consistently trivializing about the breathy, hyperbolic tone of Autostraddle’s language. Things are routinely “perfect” and “amazing,” or “the worst ever.” It’s confusing to read vapid fluff pieces like “I’m Sorry But You Still Can’t Have These Marshmallows” alongside (often smart, serious, articulate) deconstructions of gender identity and social expectation like “Notes from a Queer Engineer: Can Inanimate Objects Be Sexist?,” “Five Things You Should Know About Your Agender Acquaintance,” and a new column on sexuality, religion, and wellness.

To be clear, what troubles me is not exactly the language itself—there is plenty of hyperbolic writing on the Internet—but rather what the language stands for, the stereotype in which the language situates itself. Superficially, my argument has a great deal in common with that of Molly Fischer’s 2011 essay, “So Many Feelings.” Fischer criticized the straight “ladyblogs” for baking “pies with low-hanging fruit: they are helpful, agreeable, relatable, and above all likable,” that is, for visibly performing the traditional emotional work of womanhood. 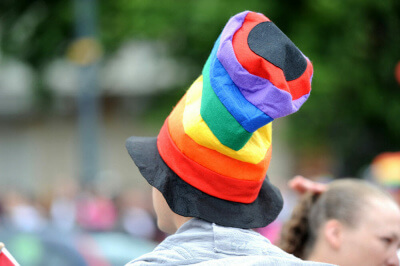 I for one do not take issue with the emotional work being done at Autostraddle—I call that community—but rather for the disparity that the site’s vapid linguistic choices create with the often important work it does to normalize a variety of gender identities and sexualities. When linguistic specificity is so essential to normalizing and dignifying those identities that Autostraddle claims to include (by giving transpeople, queens, and butches the same voice and respect as, say, straight women), its casual treatment of language undermines its own important work.

It is uncomfortable, I admit, to be criticizing a website that provides a feeling of casual, mainstream inclusion to people who rarely receive that treatment in American media. It is also uncomfortable to be a woman criticizing things that are written in an appealing, feminine voice. Women are trained to be appealing; culturally, we associate that kind of sweet enthusiasm with femininity, and we dismiss its ability to think critically to challenge authority.

I am several layers of misogyny deep here, because it is so ingrained in me as a woman to both despise what I am supposed to be, and also to criticize other women who perform it better than I do. In Autostraddle, I expect a performance of complexity from a publication covering issues that are not saccharine. I do not know how to accept my values reflected in a voice I do not recognize as my own. I don’t expect the voice of the subaltern to sound like a cheerleader. You no longer have to be straight to be square.

In her very smart 2012 book The Gentrification of the Mind, novelist and lesbian activist Sarah Schulman argues that gays and lesbians—and queer culture as a whole—only became acceptable to the American public when the facts of their oppression and difference were erased or silenced. Shulman points specifically to the queer radicals who died during the AIDS crisis, many of whom were poor, or people of color, or both. She argues that the lack of their presence and their stories in contemporary discourse allows for the (straight) public to be “suddenly convinced that gays and lesbians are white, bourgeoisie, [and] privileged,” and therefore socially acceptable and untroubling. 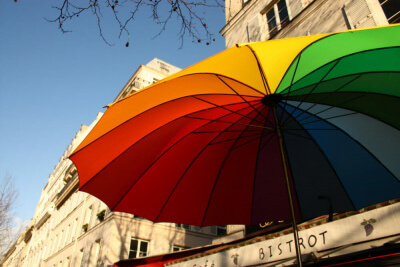 By cultivating an unchallenging linguistic similarity to Cosmo, that bastion of white, bourgeois privilege, Autostraddle makes its queer voice palatable to the mainstream. Moreover, a constant among the bourgeoisie and the privileged in America is that they like to buy stuff, and Autostraddle doesn’t disappoint in that department. The Autostraddle store features by-ladies-for-ladies pinup calendars, flasks with “You Do You” etched inside a triangle, and “Straddle This” logo boxer briefs. All cute, appealing merchandise—what easier way is there to adopt and advertise an identity than by buying into it? Like Cosmo, the site makes accessible what once was radical, both by providing personal-branding items to queers who are looking for an easy way to self-identify, and by situating queer culture in the marketplace.

Cosmopolitan.com, by contrast, has no store. It doesn’t need one. Yes, there are plenty of beauty and fashion articles promoting certain products and brands, plus a scrim of advertisements around the edge of the page, but Cosmo’s website does not make shopping an obvious end. (Instead, it’s an integral part of everyday living. How will you give yourself A Beautiful Bordered Pink-and-White Mani if you don’t already own multiple bottles of polish? And of course the print magazine graces checkout counters around the world.) It takes a lot of money to appear so blasé.

Meanwhile, Autostraddle’s promotion of queer culture through consumption might seem more crass, but ultimately it’s less insidious, more compartmentalized. Is it easier to be suspicious of obvious displays of need? We’re trained to believe that trying too hard is tasteless. The natural look is in this season, haven’t you heard?

In 2009, Nina Power wrote in One-Dimensional Woman that “If the contemporary portrayal of womankind were to be believed, contemporary female achievement would culminate in the ownership of expensive handbags, a vibrator, a job, a flat, and a man.” In the intervening five years, only the man has been called into question in the mainstream. He could be anybody now. With the right accessories, you could be her. And for the right price, anyone can be an advocate. There’s something troubling in consumer advocacy, beyond turning struggles into fashion statements. At some level, the commodification of activism on Autostraddle is a way to transmute difficult truths into digestible, feminized products—as containable and limited as Cosmopolitan’s ideal woman.

Diana Clarke lives in West Virginia. She writes frequently for the Internet about sex, technology, class, and identity. A regular contributor to The Billfold and a reviews editor at the [PANK] blog, she tweets at @dclarkwithane.

Age of Iron
Bongani Kona
What led the adversaries in apartheid South Africa to seek a negotiated settlement instead of a fight to the finish?
January 10