Industrial cattle are shoddy pieces of machinery. They demand an absurd amount of feed, water, and land; they get sick constantly; they shit everywhere—and to put a cherry on this putrid beefcake of evolutionary workmanship, the methane they’re constantly burping out is gassing the inferno of global warming.

An uncreative mind might look at such an animal and think that, perhaps, breeding and slaughtering it on an ever-expanding scale has the makings of catastrophe. But for a visionary, cattle offer an opportunity to fix the many, many failures of nature. Just look at the world-changing innovations that the beef and dairy industries have already brought us: consider the marvels of genetic engineering, the brutal efficiency of the factory farm, or the captive bolt pistol. Such developments helped the beast become a functional component of modern industry, but in this moment of profound ecological peril, beef must be more: it must become “sustainable.”

Thankfully, our top creative minds are on the case and already producing results. One winner of a recent Terra Carta Design Lab contest—presided over by Apple’s erstwhile head of planned obsolescence, Jony Ive, and monarch-in-waiting Prince Charles—to help find “credible and sustainable solutions to the climate crisis” offers a glimpse of the bright future cattle have ahead of them. Behold Zelp: a methane-oxidizing wearable designed to minimize bovine emissions. Because “eliminating the livestock industry is not a realistic solution,” Zelp will instead blunt its adverse effects on the biosphere.

This sort of award-winning imagineering is coming none too soon: sustainable cows are one key to enabling continued growth in the beef and dairy global markets. According to a report from the Organization for Economic Cooperation and Development (OECD) and the UN Food and Agriculture Organization, global meat consumption has more than doubled over the last twenty years—and is expected to rise by another 13 percent by 2028. Growth in the coming decades will be concentrated in places like Africa, where consumption is anticipated to rise some 200 percent over 2015 levels by 2050, and Asia, where meat and fish consumption is projected to shoot up by 78 percent by midcentury.

The butchers of the global meat industry are keen to keep this demand rising—with a little help from taxpayers and private investment. In 2017, governments propped up agriculture to the tune of $233 billion globally, 22 percent of which went to meat products alone. At the start of the pandemic, the federal government offered American meat manufacturers billions in bailout funds as millions of animals were culled, their meat and milk tossed out. Decades of excessive meat consumption in the wealthiest nations like the United States, the EU, and Australia has investors and governments assured that they can recreate and maintain the magic overseas.

Sadly, the philanthropic endeavor to get everyone on earth a decent cut of sirloin is catching a lot of flak from the growing number of people directly affected by extreme heat waves, decades-long droughts, and mass extinction. As countless studies over the past two decades have pointed out, the beef industry is about as unsustainable as it gets. Animal agriculture is a major contributor to global deforestation and species loss. It produces nearly 20 percent of greenhouse gas emissions, has driven the use of pesticides to double in the last thirty years, and because the majority of all medically important antibiotics are sold for use in animals, livestock farming contributes to increasing antimicrobial resistance. Industrial livestock are also the second leading cause of zoonotic disease transmission. In fact, the full scope of the industry’s impact is likely understated—as most global beef producers don’t actually know how much GHG they are emitting—only that it is enough to be, in a word, unsustainable.

But there is too much money, public and private, invested in the industry to jettison its scorched-earth tactics—a necessity if we’re to keep anywhere within 1.5° Celsius of warming—so instead, beef multinationals like Zelp-backer Cargill are shelling out for the sleekest looking tech money can buy to convince investors and consumers it’s even remotely possible to meet the laughable sustainability goals they’ve set for themselves.

They’ve nevertheless got their work cut out for them. For capturing methane, Zelp’s smart muzzle is one approach: once affixed to the cow, it absorbs exhalations, and, using a catalyst to oxidize the methane, releases it into the air as water vapor and CO2, reducing emissions by “up to 60 percent.” This data is then relayed back to HQ. Cargill and Zelp plan to start rolling it out to dairy farmers in the EU before the end of the year. Others have suggested cumbersome backpacks for the cows. Already in relatively wide use are methane digesters, where massive piles of cow shit are placed into sealed tanks and, with the help of a little bit of imagination—and some extra GHG emissions from the transportation of methane, the construction and operating of a fermentation power plant, and from the fermentation process itself—it is turned into biogas for notable environmental stewards like Chevron and BP.

These methane-capturing devices prop up the delusion that having more cows can actually help “green” the dirty business of fossil fuels. But it’s not just the methane product that comes from these new cows: data on the captured methane is also one of the many dubious ways to generate carbon credits that can be sold to companies and nations trying to reach “net zero” by offsetting their emissions. The net-zero corporations of tomorrow will be the brood of the near net-zero cow today.

Just think of it: with every fart and belch from those ill-made beasts, another dollar in the pocket of Cargill, friend of the planet. But in order to get a good accounting of how much green money, down to the red cent, is being made from the captured methane, the net-zero cow must have adequate tracking technology. This is being made possible by a network of tracking devices like Zelp’s smart muzzle, a collar, or tags, that monitor the roaming beef. Just like your Fitbit, Apple Watch, or any other wearable fitness tracker, applying these already popular surveillance strategies to cattle can help the tech-savvy farmer understand the health and fertility of their cattle—and perhaps one day their relationships and mental health—with the goal of making them more sustainable and efficient. As anybody with a phone, social media or a data-tracking wearable can attest, the attachment to a mass surveillance device can make anyone happier and more efficient—be it the industrial cow or the industrial man.

If there is anything that unites the design of the many products and innovations that the beef and dairy industry relies on, it is control, or at least the appearance of control. The iOS-compatible cow is about not only controlling the animal, its environment, and every single molecule that goes in and out of it— it’s about controlling an industry in a rapidly changing world. This is the time-tested key to a successful company like Cargill, which operates in seventy countries and regions, and sports an impressively long record of criminal activity as part of the maintenance of its famously opaque empire. While many companies hope to be well on their way to net-zero by 2030, Cargill hopes that it might be able to end deforestation across its supply chains—a goal previously set for 2020, but they just didn’t get around to it. Unfortunately, child enslavement, labor abuses, and ecocide are just the costs of the selfless mission to beef up the diet of the world’s growing population.

While the brilliant minds at the global slaughterhouse tinker with their new tech in hopes of somehow cracking this whole sustainability thing, global warming, biodiversity loss, and environmental desolation are eroding the food systems of subsistence farmers. In Nigeria, cattle farmers are struggling with extreme drought, desertification, urbanization, and land scarcity as they try to keep up with growing demand, leading to conflict among farmers. In response, the government has undertaken measures to “modernize” the cattle industry, but it is struggling to find the land and water to handle the boom. In Brazil, where beef is—with a little help from Uncle Sam—king, the industry has led to violence against indigenous communities and the murder of activists, as well as to the desolation of some of the most biodiverse forests on the planet. Resistance to big beef is largely futile, as multinationals rule the cattle supply and have created a sophisticated system of “cattle laundering,” making it exceedingly difficult to know if cattle have been raised on illegally deforested land or not.

It seems strange that the companies so passionate about nourishing people would have such a high threshold for death and destruction. But as is evident from the industry’s mission to extinguish biodiversity and degrade the planet’s soil, they are keen to create an Earth where their industrial cow, chicken, and pig are the only options left. The mission is suicidal: there is simply no truth to the claim that big beef can adequately feed the world. GHG emissions from food production are set to rise 60 percent by 2050, and currently beef and livestock account for nearly 58 percent of greenhouse gas emissions from the food sector—even though only 17 percent of global caloric consumption comes from animal-based products.

As the beef industry expands its campaign of ecocidal terror, Zelp shows us a glimpse of our future. Cargill and its companions will continue to cut the planet clear of people, plants, and anything else that stands in the way of the holy cow, all the while working with designers and engineers to become more “sustainable” through the creation of muzzles, apps, and other worthless gadgetry. Only the criminally insane could look at such devices and see a solution to the beef industry’s ill effects, but we can sleep soundly knowing that these magic muzzles and the future of methane-sucking wearables were all devised in service of the far more noble goal—no, not to save the planet, but to protect tomorrow’s barbecue. 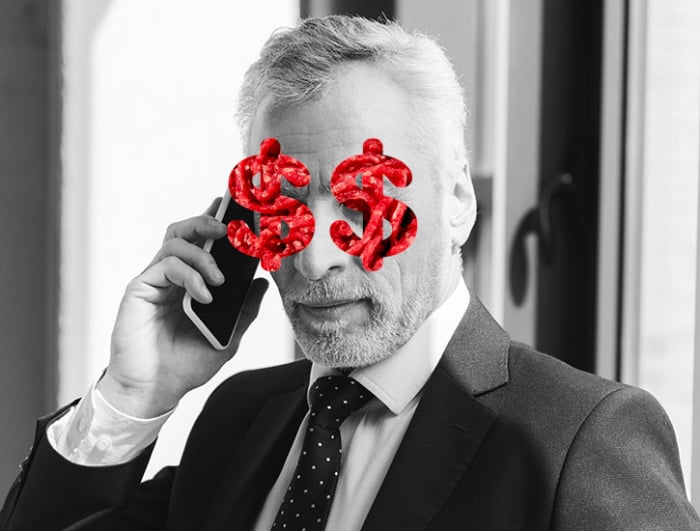 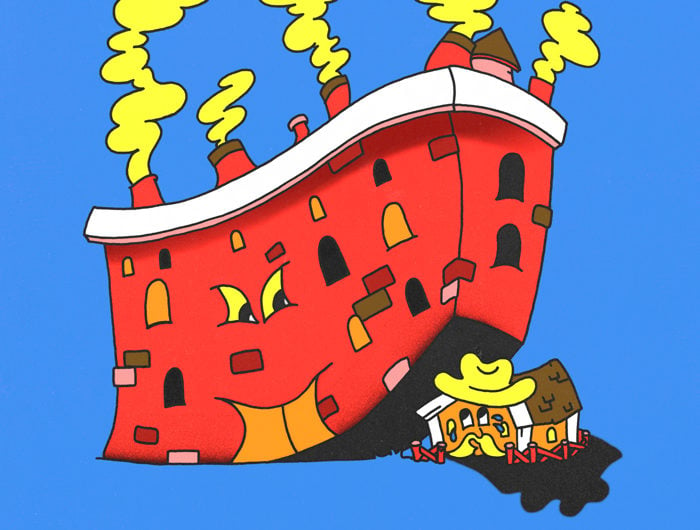