When poet Gregory Orr was twelve years old, he accidentally shot and killed his younger brother in a hunting accident. Orr, ruminating on the dreadful event decades later, concluded that “. . . to fire a gun is to have your imagination tangled up with fantasies of power. A fatal accident makes a mockery of these fantasies.” Orr is, of course, right. The American mind—that is, the imagination of one who has lived fully within the frighteningly anemic domain of contemporary American popular culture—does in fact meld violence and power in a reverie that inevitably wakes to regret.

And yet, going deeper, we could ask: What is the bedrock delusion that animates American gun violence? It is, at least in part, the mistaken belief that violence itself is a force we can personally control and predict, rather than an energy that urges us toward an unseen and terrible end. And so it isn’t simply an accident that “makes a mockery of these fantasies,” but the fulfillment of some violent drive. Assassinations. Mass shootings. State executions. Crime waves. The outcomes of gun violence do mock our fantasies of power, in part by confusing the very terms of accident and intention.

Conceptual and digital artist Joseph DeLappe keeps the peculiarly American amalgam of violence and fantasy at the forefront of his work. This is most evident in projects like the ongoing “Thrift Drones,” begun in 2016, in which “thrift store artworks are changed with the subtle addition of cut out images of Predator and Reaper drones,” with the intention of re-donating the artwork to the thrift stores as part of a “long term effort to place drones into the skies of hundreds of pieces of thrift store art.” Or “In Drones We Trust,” a work that finds DeLappe stamping currency with images of drones in flight. In both cases, the artwork operates on the level of the symbol, juxtaposing reminders of ongoing violence with seemingly innocuous representations of fantasy: cheesy discount art, patriotic imagery on currency, and, of course, video games. And it’s with DeLappe’s latest work, “Elegy: GTA USA,” that this jarring mashup achieves a most disturbing and (perhaps) cathartic result.

Our point of view fixes on a bloodstained street corner and then slowly oscillates and rises toward a digital horizon crowded with buildings and palm trees. The wide boulevard is empty of human figures except for the body of a man in a white T-shirt and shorts who slides across the street in that odd, glitchy way familiar to anyone who’s played Grand Theft Auto. The body finally comes to rest at the edge of the digital pavement, transforming into an oddly mislaid corpse. Our POV continues to rise and shift and our field of vision expands before Kate Smith’s 1938 rendition of “God Bless America” (this year marks the hundredth anniversary of Irving Berlin’s original composition) plays, haunting the landscape—a patriotic ghost sings of a long-vanished ideal as more bodies fill the street. Our perspective shifts once more. A massacre has occurred; characters dart along the edge of the screen, leaving us uncertain as to whether they’re potential victims or the perpetrators of a bloodbath.

These were my first experiences of “Elegy: GTA USA” as a YouTube clip. DeLappe describes the project as “a gaming mod for Grand Theft Auto V that reenacts each day the total 2018 gun homicides since January 1, 2018.” These homicides, DeLappe adds, are “scraped from the Gun Violence Archive. Gun homicide totals since January 1 are revised daily on this website which are then fed directly into the project—starting at zero each midnight. Each day the new total body count since January 1 is reenacted in it’s [sic] totality and so on.” The short of it is that DeLappe has reprogrammed non-playable characters into agents and victims of real American gun violence, which is then played out for audiences daily on the streaming service Twitch. The work, rooted in real death but delivered digitally, combines gut-wrenching horror, digital escapism, and vapid jingoism. It is, in other words, political-performance art of a deeply American bent.

For all of its originality, “Elegy: GTA USA” isn’t too far removed from the rest of DeLappe’s digital oeuvre. He once used a treadmill to recreate Gandhi’s 240-mile march to the sea to protest the British salt tax. And he later, with “Killbox,” created an interactive video game that reckons with the consequences of drone warfare. With “dead-in-iraq” DeLappe entered “the online US Army recruiting game, ‘America’s Army,’ in order to manually type the name, age, service branch and date of death of each service person who has died to date in Iraq.” Still, a number of obvious and significant differences emerge with “Elegy: GTA USA.” The project, for example, shares a general continuity with DeLappe’s established artistic preoccupations—staging visceral interactions with symbolic violence in entertainment spaces usually associated with escapism and fantasy—but, until now, he had never addressed American violence as anything more than a massively destabilizing export, and never as something that Americans inflict on themselves. As he explained to me in an email, “Elegy: GTA USA” “deals specifically with . . . violence in the United States—previous to this the vast majority of my work has dealt with U.S. militarism and [its] consequences abroad.”

DeLappe’s art is of that rare sort that can culture jam without losing the complexity of an aesthetic sensibility. What the image of a drone stamped onto a dollar bill means is as strange and compelling as how it looks. And the same holds for “Elegy: GTA USA,” where the viewer is aware that she is captive to a work of artifice, a game laced with a hypnotic cinematic energy that betrays the project’s aim: to memorialize the disturbing level of gun violence in America, and to gesture to our sense of being entertained by it. What the piece performs then is our collective cultural incapacity to acknowledge, accept, or deal with this violence. In this respect, “Elegy: GTA USA” becomes a working model of how our violent fantasies coexist with our living horrors.

The work is disgusting, and while we want something to change in the real world, which provides the game’s structure, we’re nonetheless left aghast in a pool of digital viscera.

“Elegy: GTA USA” succeeds by contorting our expectations of video games. Instead of imaginary violence that invades our everyday world, it’s the horror of the violent world which pervades the game. In this representation, the Tipper Gore Model of domestic tranquility through censorship of the arts collapses under the weight of its own banality, and the relation between real violence in the world and depictions of violence we consume for entertainment is rendered in experiential terms. We come face to face with how much “reality” we grant our fantasies, and how much fantasy is embedded in what we consider our reality. There’s a word for this occult psychological space which DeLappe explores. Writing about the spread of technologies such as film and cameras, Walter Benjamin coined the phrase “optical unconscious” to describe the effect new technologies have on our unconscious perceptions of the world. Building on this idea, theorists such as Nigel Thrift and N. Katherine Hayles have used the phrase “technological unconscious” to describe how “human behavior is increasingly integrated with the technological nonconscious through somatic responses, haptic feedback . . . and a wide variety of other cognitive activities that are habitual and repetitive and that therefore fall below the threshold of conscious awareness” (as Hayles describes it in “The Traumas of Code”). “Elegy: GTA USA,” then, acts as informal therapy for our technological unconscious, forcing us to confront our psychically interwoven fantasies of violence and power.

If there can be said to be a weakness to “Elegy: GTA USA,” it’s that there isn’t a story, a narrative structure on which to hang our moral objections, one that would give coherence to our rage. The work is disgusting, and though we might want something to change in the real world, which provides the work’s structure, we’re nonetheless left aghast in a pool of digital viscera. DeLappe provides a flat sense of hopelessness. Nonetheless, it feels like what is happening here amounts to more than a political stunt, that DeLappe’s work is meant to work on the nonconscious mind, slowly undoing the threads of fantasy by mocking the moral absurdity of violence. Our hopelessness is staged and reenacted within the safety of a digital model. Our observational remove somehow suggests our complicity in the violence, and the only real continuity it provides with the living world is our sense of being completely unable to make pragmatic use of our disgust.

Writing about violence and force in her work The Iliad, or The Poem of Force, Simone Weil defines force as “. . . that x that turns anybody who is subjected to it into a thing. Exercised to the limit, it turns a man into a thing in the most literal sense: it makes a corpse out of him.” Just as important, Weil observes that force objectifies those who wield it, who convince themselves that it’s simply their tool when in fact they have become a tool of force themselves. “Elegy: GTA USA” embodies Weil’s idea of violence, turning both its victims and perpetrators into objects, albeit digital ones, and in the process confuses our violent fantasies of power twice over. 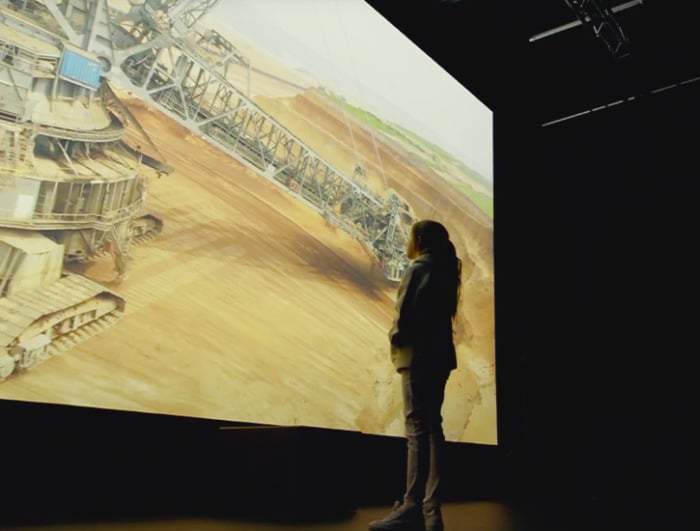 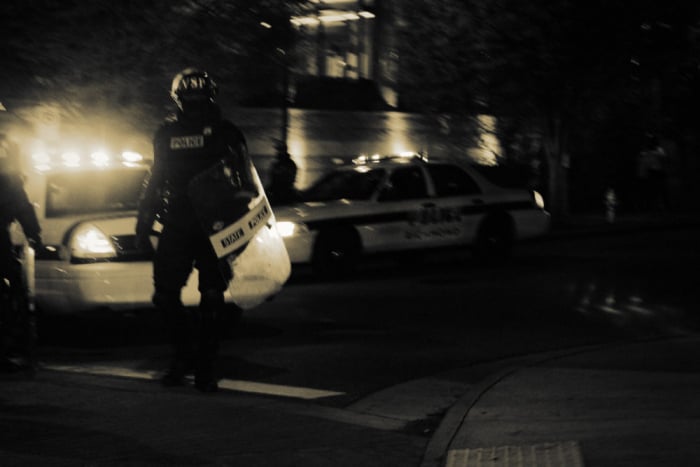 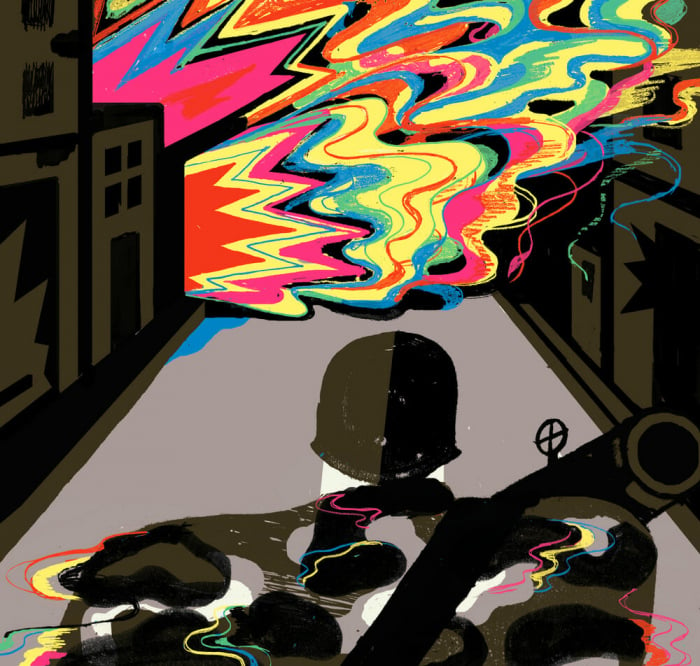