Welcome to Interviews for Resistance. Since election night 2016, the streets of the United States have rung with resistance. People all over the country have woken up with the conviction that they must do something to fight inequality in all its forms. But many are wondering what it is they can do. In this series, we’ll be talking with experienced organizers, troublemakers, and thinkers who have been doing the hard work of fighting for a long time. They’ll be sharing their insights on what works, what doesn’t, what has changed, and what is still the same.

Sarah Jaffe: This week the Republicans are going to try to ruin all of our lives. You have a guide out on action for this week. Can you tell us a little bit about it?

SJ: We will obviously link to your guide itself, but what are some of the tactics you are recommending?

AP: We are at a point now where we really just can’t hold back. In this guide, we have suggestions like letters to the editor and non-stop calls. We need to be calling every day to make sure that Senate offices are hearing about this bill and about how people don’t want it. We are also for the first time, in one of our more recent toolkits, asking that people consider doing sit-ins. In our original guide we have instructions for how to hold a sit-in and we feel that this is one of those moments when we really have to do everything we can. Sit-ins is one of those things that constituents, that groups, can do to make it clear to Senators that we are not okay with them trying to take away people’s health care.

SJ: Reports today came out that they are not even going to release anything right now, which obviously seems like a deliberate strategy to keep people from getting fired up about it. Do you think that is working? Is that, in itself—a refusal to release it—getting people more angry?

These are the key weeks for stopping this terrible health care bill from getting through the Senate.

AP: There are plenty of reasons to be angry about this bill. If they release it, then we all see exactly how bad it is. We will see that millions of people are going to lose their health coverage, but it is also very telling that they don’t want to release it. It is because they know that it is really bad and they are hoping to tamp down some of the opposition. Honestly, when we are talking about a sixth of the U.S. economy, when we are talking about millions of people who might lose their coverage, the fact that they don’t want to release it is a terrible thing, which is why we are asking that there really shouldn’t be any kind of senate activity—Democrats have tools available to them that they are not using and until we get public hearings, we don’t think anything should be happening in the Senate. Democrats should slow this down as much as they can. Again, the American public deserves a transparent process. They deserve to hear and to know how this bill will affect them.

SJ: To be clear, you are recommending that people call Democratic senators as well as Republican senators and insist they do something about this?

AP: Yes. As we have all seen, when constituents go down to town halls and they get in front of their member and they tell them about how passionately they don’t want to see this bill become law, that is the same kind of passion that we also want from Democrats. It is not enough to say that you will vote against the Trumpcare bill. It is not enough to say that you oppose it. You need to do more and they do have certain tools available to them that they are not using. We don’t think that is acceptable, not when people’s lives are on the line.

SJ: During the last Senate recess, there were I believe no town halls held by Senators?

AP: Yes. Republican senators are hiding from their constituency. They are afraid of facing them because they know they are pushing this bad bill that is going to harm them. It is a bill that is literally going to harm thousands and thousands of their own constituents and they are doing it simply because they want to give Donald Trump a win. That is why they are hiding. That is why we have to bring the fight to them.

They are hiding, but constituents can go down to regional offices and they can make their voices heard. They can have sit-ins. They can keep calling. Even if they are not willing to meet with their constituents, they are paying attention. They know that people don’t want it. The only way we are going to stop this bill is if they really get the sense of how widely opposed this bill is. That is the truth.

SJ: The news cycle in the past few weeks has been packed with stories coming out of this administration—even though they have not been able to succeed in passing much or doing much. Has it been hard, with the Comey mania and now with the Sessions testimony to get people to focus back on this?

AP: Yes. It was a problem for us, too. We changed our position now. We had been calling for an independent commission to go along with the independent counsel. Now we are pushing for impeachment hearings because we think that Donald Trump has done enough, has committed enough of a violation that it warrants impeachment hearings. We are there. I think a lot of our groups were already there weeks ago.

But now, now that is a process that will play out over the course of months and maybe even longer than a year. For now, the thing that is most important is defending the ACA and even though Sessions is testifying, the only thing people should be talking about right now is ACA. That is the thing that matters.

SJ: And certainly, Paul Ryan would if we get that far down the chain.

AP: This is the moment. This is a do-or-die moment. That is what it says in our toolkit because this is really it. In January when Trump took office, a lot of groups thought that the House was going to easily pass the bill and the fight was really going to be in the Senate. Luckily because of all the constituents that came out, we slowed it down in the House and we almost won. We almost killed it four times in the House. It had to get pulled or delayed a number of times. But now, we are where we thought we would be which is in the Senate. This is where we need to stop it and if we can’t stop it here in the Senate then it is going to be really hard to stop it at all.

SJ: We were talking about the need to call everybody, but are there particular targets or particular Republican votes that you think you can flip on this?

There are plenty of reasons to be angry about this bill.

AP: Yes. We actually just created a new website. It is called TrumpcareTen.org where we have the ten states that matter the most. To be clear, I think the most important message that Republicans need to see and hear is that there is widespread national opposition to this bill. Again, there is. No one wants this bill. It doesn’t matter if you are in California or if you are in Alabama. You should be out there telling your Senators that you do not want this bill.

But, we do have the ten states where we really do think that we can apply a little bit more pressure. I think the biggest ones are Alaska, West Virginia, and Maine. We also have Nevada, Arizona, Colorado, Ohio, and Pennsylvania. All of these places are important in this fight and they are going to make the difference.

SJ: Indivisible has been around now for a while. Tell us how it is going. Are people still forming new groups? Where are things?

AP: We do have new groups. Every day we have another few groups that join. We are over six thousand and actually, some of these—we were at seven thousand but the number went down a little bit because some of these groups ended up consolidating, joining forces locally. It is actually our six-month anniversary this Wednesday. Groups are still mobilized. People are still activated. Now we have a few more staff people that we can use to provide more resources to the group. The excitement is still there. I think with all of these groups, the main thing on their mind is still ACA. That is what gets them out to town halls and that is what they are focused on now.

SJ: How do people keep up with you and find their local Indivisible group?

AP: Yes, we are everywhere. If for any reason there isn’t a group nearby, if there is some issue, you can always start your own. 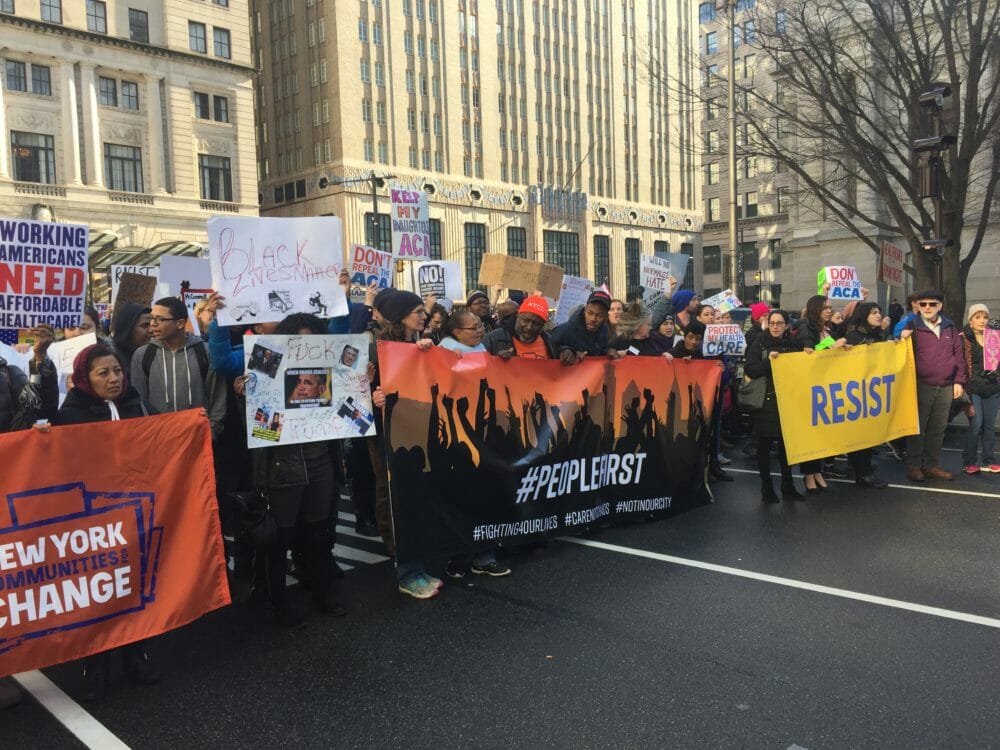 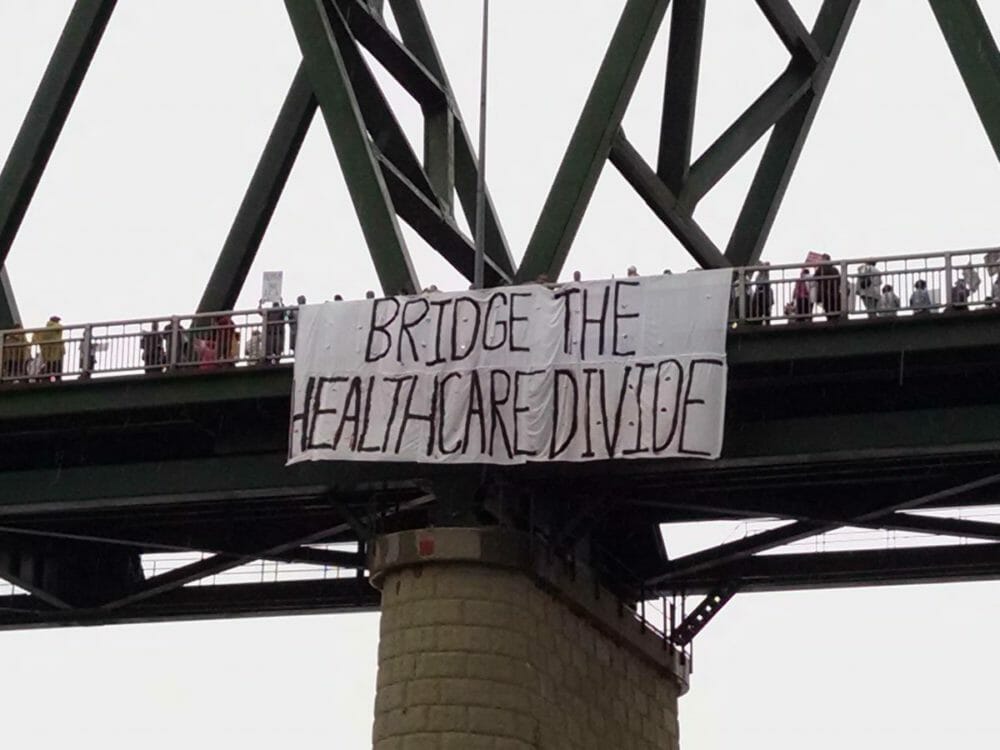 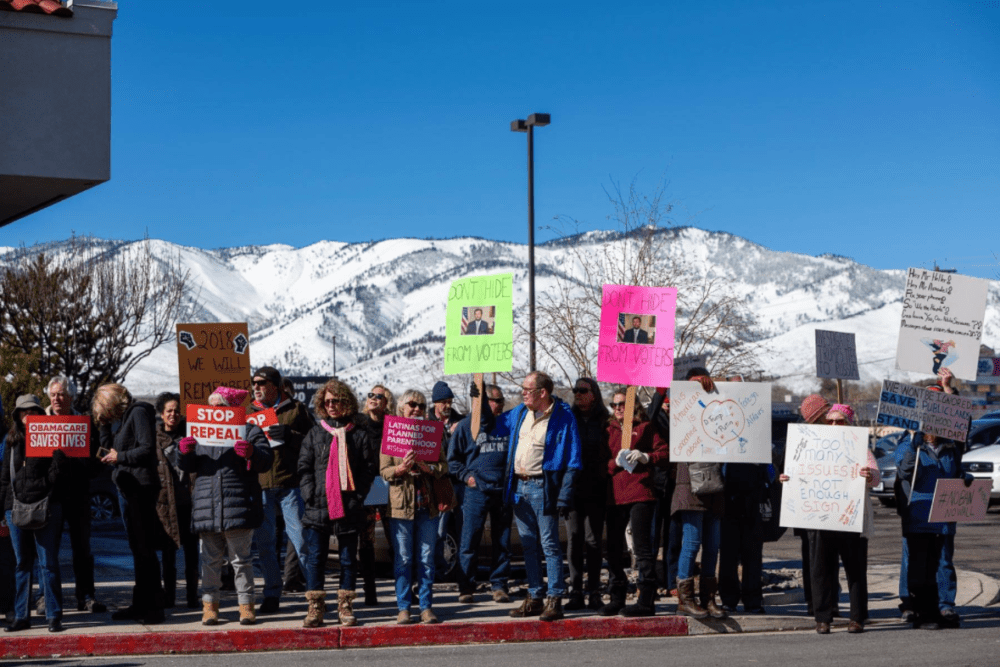 We Are All at the Table Together
Sarah Jaffe
Columns