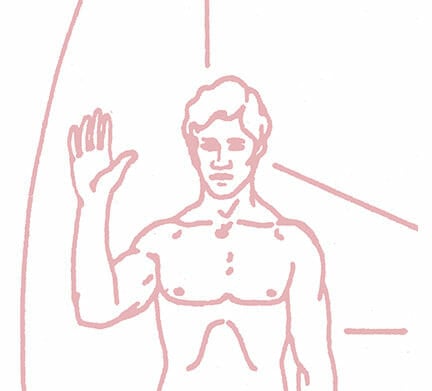 This famous essay, written nearly a century ago, is a chin-stroker of the first order. But if you read attentively in Simmel’s observations about the modern quality of strangeness, then you may better comprehend the fear of refugees in Europe, the outbreak of xenophobia in the United States—and why your lover kind of likes you but also kind of doesn’t. This translation from the German, by Ramona Mosse, is taken from Georg Simmel, Soziologie. Untersuchungen über die Formen der Vergesellschaftung. Berlin: Duncker & Humblot, 1908. S. 509-512.

The concept of “the stranger” suggests that foreignness is a psycho-cultural as well as a geographical matter. A stranger is not a wanderer, who may come today and leave tomorrow. He comes today—and stays. He is a potential wanderer: although he has not moved on from the society, he has not quite shed the freedom to stay or go, either. He remains within a specific place, but he has not always belonged to it, and so he carries into it qualities that do not, could not, belong there.

The stranger is a paradox: he is here, close at hand, but his having recently been far away is also present to us.

The stranger is a part of the community, like the poor, or various “enemies within,” but a part whose position is simultaneously that of an outsider and a counterpart. The way this distance and apartness form a sense of closeness and togetherness calls for some explanation.

Throughout the history of economics, the stranger has usually been a tradesman and the tradesman a stranger. As long as the economy is limited to the direct exchange of products within a closed system, there is no need for intermediaries. When people travel to foreign places to buy what they need, they become foreign tradesmen in those regions. Historically, tradesmen have necessarily been strangers.

But an economic system with a division of property and production on demand will offer a living to the tradesman who settles there. Trade is always capable of reaching more people than primary production. It is the preferred area of engagement for the stranger, since he enters the system as a supernumerary, after all other economic niches are filled. The history of the European Jews offers a classic example.

By definition, the stranger is not a landowner. (“Land” here can be understood in a wider sense, as any vital resource in some social sphere.) Though the stranger may come to be on intimate terms with many of his neighbors, he is perceived as being of a mobile, unstable character because of his dependence on intermediary trade, which often becomes sublimated into pure money trade—i.e., moneylending. This mobility, which occurs within the confines of a given community, contains the synthesis of closeness and distance that formally constitutes the stranger. He comes into contact only with individuals, and is not organically connected to familial, local, or occupational networks.

Another way to express this constellation of social meanings lies in the “objectivity” of the stranger. Since he is not rooted in the particularities and biases of the community, he stands apart from it, in an attitude of objectivity. This is not an aloofness that lacks involvement but rather a curious combination of closeness and distance, of detachment and engagement.

And the objectivity of the stranger leads to another phenomenon: he is offered revelations, confessions otherwise carefully hidden from any more organically embedded persons. Objectivity, remember, is not non-engagement; it is rather a positive and specific kind of engagement, much like the objectivity of a theoretical observation, which does not turn the mind into a passive tabula rasa upon which objects merely become imprinted. Objectivity suggests an active mind operating at its fullest capacity according to its own laws. Such a mind ignores random variations and accentuations that are particular and subjective and that would deliver radically different images of the same object.

Objectivity is also a kind of freedom. The objective person is not constrained by predispositions that would prejudice his perception, his understanding, or his judgment. Such freedom allows the stranger to experience close relationships as if from a bird’s-eye view, but it also has its dangers. During rebellions of any kind, the attacked party frequently claims that the rebels have been incited from the outside by foreign envoys or agitators. What gives such accusations apparent plausibility is the stranger’s “objectivity”: he is able to judge conditions with less bias and evaluate them with greater detachment. His actions are not bound by habit, piety, or precedent.[*] The attacked party acquits itself of responsibility and ignores the real grounds of the uprising by creating the fiction that outsiders are responsible and they themselves are not to blame.

Finally, the combination of closeness and distance that endows the stranger with objectivity finds another, psychological, expression: locals merely share certain common characteristics with the stranger; in contrast, their relationship to other organically connected locals expresses a deeper commonality based upon the act of differentiation. At bottom, all personal relationships follow this pattern. Personal relationships are shaped not just by certain commonalities and differences, abstractly considered, but by their existence in this particular relationship. Likewise, individuals experience shared qualities only insofar as they are considered native to a certain group or type. Even when all humanity shares some quality, its power to unite people weakens in proportion to the size of the local group. It still functions as a common ground for the members of the group, but it no longer unites them against all outsiders, since some of the latter may share it. This is another example of a relationship that simultaneously expresses closeness and distance: to the degree to which these qualities are widely shared, the warmth they provide becomes mingled with an element of coolness; a sense of randomness enters the relationship. The forces that bind together have lost their particular, centripetal character.

A trace of strangeness lingers in even the most intimate relationships. Erotic relationships decidedly deny generalization in the first stage of passion: to the lovers, a love like this has never existed before; nothing can match the beloved or our feelings for him or her. Once this experience of singularity wanes, an estrangement sets in—it is hard to say whether as cause or effect. Skepticism about the relationship’s unique value becomes tied to the idea that one might merely be enacting a generic human fate, that one’s experience has been gone through already a thousand times by others, and that if one had not accidentally encountered this particular person, many others might have gained a similar importance for us instead.

No relationship, however close, can eliminate an inkling of such estrangement, since there always remain those other possible ones. Even though these other possibilities might be unrealizable, and even though we might forget about them, they hang like a shadow between people. They creep from each particular act of naming like a fog that still has to merge into a definite shape, a shape we might call jealousy. Maybe this is a more widespread or a more insurmountable sense of strangeness than the strangeness that manifests as being wholly different and unfathomable. In this case, similarity, harmony, and closeness exist but are not exclusive to a particular relationship; they are instead something that potentially exists between us and an indefinite number of others. The individually realized relationship cannot claim an intrinsic or absolute status.

There exists another kind of “strangeness,” which denies that different parties become united by a shared commonality: for example, the relation of the Greeks to the barbarians. Here are included all cases in which the Other is denied the common characteristics that count as fundamentally human. In this sense only, the idea of “the stranger” carries no positive connotation. The relationship to him turns into a non-relation, because he is not what we have been discussing here: he is not a part of the community.

There is closeness and distance here, as in any relationship founded on general human commonality. But this closeness and distance harbor a particular tension: the awareness of what is common to all pulls into focus that which is not shared. Being of another country, city, or race is not something wholly individual. A foreign origin is something that many strangers share, whether actually or potentially. Hence, strangers are not conceived of as individuals, but rather as a particular instance of the Other. One experiences strangers as distant in the same generalized manner as one experiences their closeness.

The medieval tax levied on Jews in Frankfurt and elsewhere is a case in point. While the tax on Christian citizens was raised according to their level of wealth, the tax on the Jews was fixed. This fixedness was based on the fact that Jews held their social positions as Jews and not as bearers of other social functions. In tax matters, every other citizen was a property owner, whose tax could fluctuate accordingly. However, Jews were taxpayers as Jews; their position as taxpayers had an invariable element. This situation becomes exacerbated once such particularized regulations—necessarily limited, given their rigid irreversibility—are eradicated and all strangers pay the same poll tax.

Despite his peripheral status, the stranger remains an essential part of the community. Communal life envelops the position of the stranger, consisting as it does of a particular mix of closeness and distance also inherent to human relationships generally. Our relationship to the stranger is molded by this unresolved reciprocal tension between distance and closeness.

[*] Wherever those attacked make such wrongful allegations, they can be traced to a tendency of those in power to try to exonerate their subjects, who have previously had an overall closer relationship to them.