The Baffler, est. 1988, is a printed and digital magazine of art and criticism, now published six times a year. Our first cycle of four annual issues appeared in 2016. We’re headquartered in New York City, and delivered to subscribers in all fifty U.S. states and abroad. Contributing editors include Barbara Ehrenreich, Susan Faludi, Astra Taylor, and Rick Perlstein. Our founding editor is Thomas Frank. We’re owned by the tax-deductible (hint, hint) Baffler Foundation Inc., which is as charitable as a church, and a whole lot more fun. This foundation means we rely on your donations and subscriptions rather than chasing advertising. It also means we can’t endorse candidates for electoral office or try to make millions in profit. But hey, why would we want to do those things anyway?

You are warmly invited to click on over to our online essays and updates. Please also enjoy thirty years’ worth of our past issues and art and writing from our current issue.

The epigraph stamped on The Baffler no. 1, from Arthur Rimbaud’s “Morning of Drunkenness,” introduced it as a punk literary magazine. It was the summer of 1988. The founders, Thomas Frank and Keith White, were recent graduates of the University of Virginia. They named their journal as a joke on academic fads like undecidability, then in fashion. The Baffler was born to laugh at the baffling jargon of academics and the commercial avant-garde, to explode their paralyzing agonies of abstraction and interpretation. 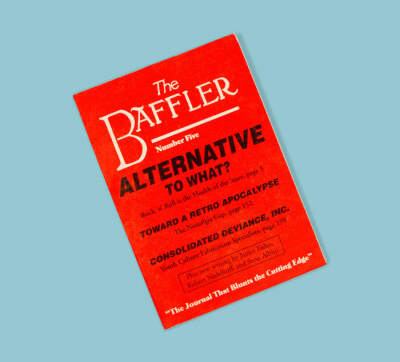 This magazine would move in the opposite direction. It would strive for the lucidity of independent critical intelligence. It would “blunt the cutting edge” of the creative class gurus, financial journalists, entertainment moguls, cyber-entrepreneurs, and postmodern theorists who were said to be delivering the country from the pesky struggles and conflicts of the Cold War and singing a sweet and blissful lullaby they called the “end of history.” Where there was money to be made.

Pop culture was entering its high hipster phase, and no souvenir that crossed the magazine’s path was spared, not even those countercultural sellouts “Scooby Doo and Shaggy.” (Yes, The Baffler no. 3 explained this pair’s meanderings as an example of the commercial exploitation of deviant subcultures.) When the New York Times Style section unknowingly printed a phony glossary of “grunge speak” in 1992, having been fooled by a member of one such deviant subculture, it was The Baffler that first reported the prank: “When the Newspaper of Record goes searching for the Next Big Thing, and the Next Big Thing piddles on its leg, we think that’s funny.”

Other lifestyle brands drubbed in the early Bafflers include MTV, Madonna, Quentin Tarantino, Generation X, alternative music, Amway, Skyy Vodka, and Wired Magazine, for starters. Those were the days when the advertising industry and the hipster were supposed to be locked in a war for the soul of youth. This magazine said they made a happy synergy of like-minded suburbanites.

There was some prescient social analysis to go along with the laughter. The Baffler said bubbles in the housing and finance industries were forming as a result of an extremist New Economy movement that was doomed to fail, though generally deemed too smart to do so. We sounded the death knell of the traditional music industry a decade or so before it occurred, anticipated the dustups over unpaid labor in Information Age media, analyzed the right-wing backlash before it spun out its unmissable perversities, and pioneered the cyber-skepticism that suddenly seems so urgent and necessary.

A printed magazine of such unconstructive thinking was itself a protest. A protest of what? The contraction of the cultural economy in journalism, higher education, and the arts, for one thing, and the torrent of euphemisms designed to hide it, for another. The Baffler broke down post-Cold War market triumphalism into absurd juxtapositions of class and culture. It showed what art and criticism could look and sound like outside the usual filters—the twee literati, the bloated universities, the velvet-gloved foundations, the viral strains of D.C. anti-thought, the meme hustlers. Think of an arts festival sponsored by a tobacco company, and you’ll get a whiff of the brand of fraudulence the magazine set out to ridicule and expose. Issue no. 4, “Twenty-nothing,” was “dedicated to the memory of our friends gone under to the brainwash of corporate jobs, the intense and enthusiastic gone salesmen or congressional staffers; those we slammed with now in the military, hopeless on the dole, struggling on for the long lost cause in small college towns, and otherwise DEAD.”

The Baffler was a cultural success, so the big money never touched it. The founders didn’t exactly cozy up to benefactors. “Our review will be neither the tool of a University ‘creative writing’ program nor the slick product of a great publishing house,” the first editorial statement declared in 1988. A third possibility—that its independence wouldn’t disqualify it from receiving a coupla threepennies from a billion-dollar philanthropic foundation or two—was fanciful. As the big money ascended into the new media cloudscape, The Baffler’s print operation refused to heed the investor-class’s siren song of obsolescence, and struggled successfully enough to disprove it. 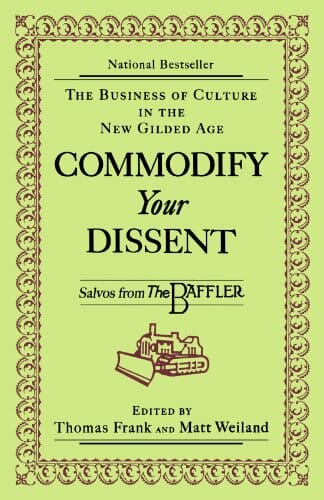 The operation migrated from Charlottesville to Chicago with its second issue in the summer of 1990. Thomas Frank assumed the role of editor in chief and over the next two decades oversaw eighteen issues, plus two anthologies, Commodify Your Dissent: The Business of Culture in the New Gilded Age and Boob Jubilee: The Cultural Politics of the New Economy.

A small crew of part-time volunteers edited, designed, and published the magazine—a quarterly that appeared only once in a while, according to one acerbic subscriber. When issues did appear in bookstores, they just as quickly disappeared. At the end of its first decade, the magazine seemed to many interested observers “as scarce as, well, a decent-paying job with reasonable hours and conditions and a future,” as the Toronto Star complained. 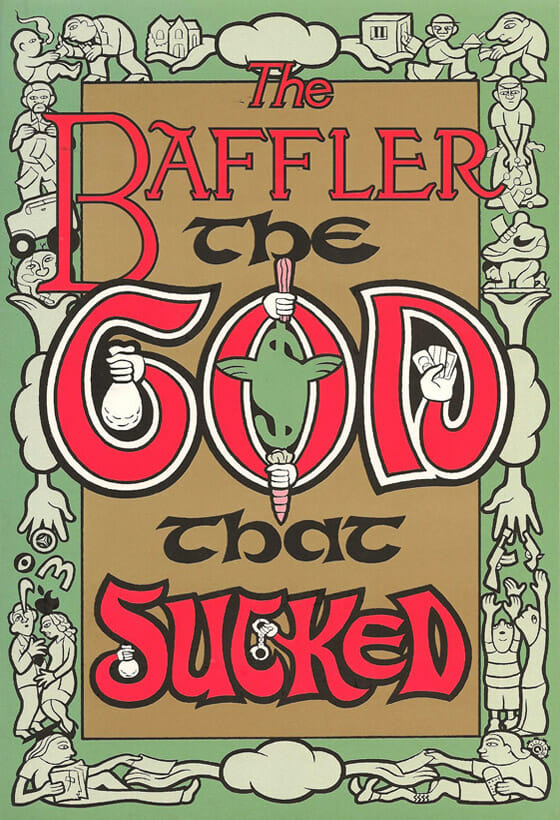 Midway through the Spring 2001 production of issue no. 14, “The God That Sucked,” the operation and most of its inventory went up in smoke. “Years of incendiary cultural criticism finally achieved ignition,” the editors gamely explained. “A pre-dawn fire swept through our office, awakening residents of Chicago’s South Side to the unmistakable smell of burning Bafflers.” Regular publication never resumed.

But the magazine never folded. Two more numbers issued from a rebuilt office three years after the fire. Three years later, in the summer of 2006, no. 17 showed up in subscribers’ mailboxes; three years after that, no. 18, “Margin Call,” arrived in time to gloat about the financial crisis. Around Labor Day in 2010, though, the founding crew had had enough, and decided to turn over the keys to the operation neither to a university creative writing program nor to a great publishing house, but to a smaller, poorer, and less experienced crew in Cambridge, Massachusetts.

Under the leadership of academic refugee John Summers and in partnership with MIT Press, in 2012 the Baffler began its most regular publication schedule to date, three issues a year. Highlights of the Baffler’s criticism during this period include exposing digital swindles like LinkedIn, Kickstarter, and Facebook-branded feminism, along with banality shops like The Atlantic and This American Life, hip cool cities like Berlin, and curious hostsites of pretend meritocracy, like Harvard. In 2013, we co-published James Agee’s Cotton Tenants, a long-forgotten manuscript about long-forgotten farmers living through the country’s last Great Depression. In 2014 we published an acclaimed anthology of our best pieces since the 2007-2008 crisis, No Future for You: Salvos from The Baffler. Good luck finding a more concentrated antagonism toward the contradiction that is “business civilization.” 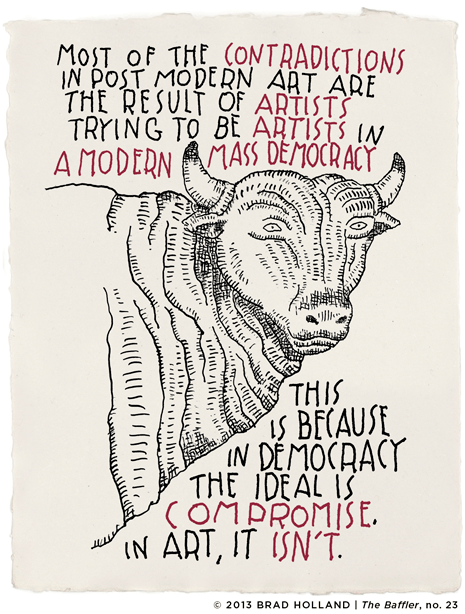 From Baffler no. 23, art by Brad Holland.

In 2016, we relocated the Baffler HQ to New York. We also called upon Chris Lehmann, long an ardent Bafflerite through the many twists and turns along what is laughingly known as his journalistic career, to take the helm as editor in chief. And this is the part where you are begged to remember that all this mockery and analysis can go only so far without your support. Please do, if you like what you see and hear, consider subscribing or donating.